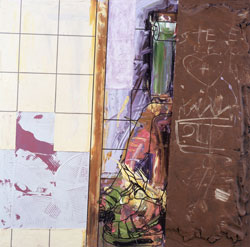 oil, acrylic and fibreglass on canvas

198.2 x 198.2 cm
Created with paint and fibreglass impasto, Marcus Harvey‚Äôs Study for Broken Lock combines the idealised aesthetics of high art with gritty realism. The materiality of the painting‚Äôs textured surface draws the viewer further into the illicit scene, the desire to look heightened with the desire to touch. Using the mimetic qualities of his medium, Harvey chisels graffiti, and inlays ‚Äòtiles‚Äô, and renders the loo bog-grimy; only the thin-stencilled lines give solidified form to his painterly composition. Flirting between abstraction and peepshow, Harvey resituates theviewer’s gaze as something voyeuristic and self-conscious. 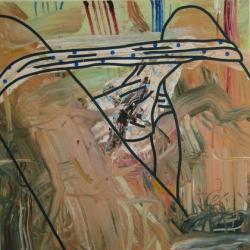 Marcus Harvey
Half way up 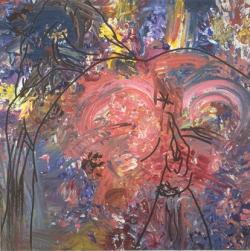 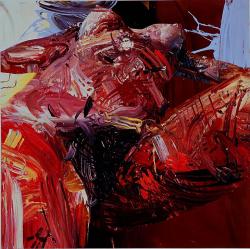 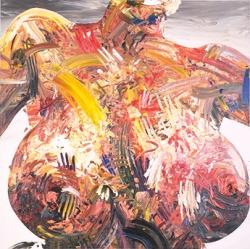 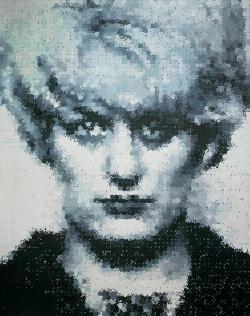 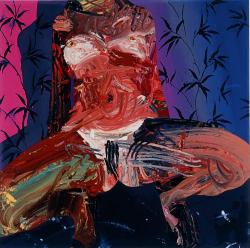 Marcus Harvey
Proud of his wife 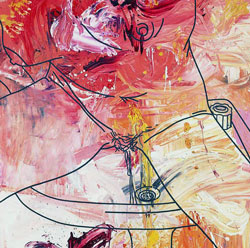 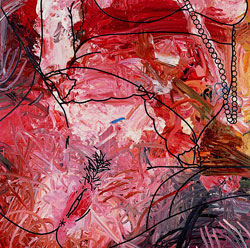 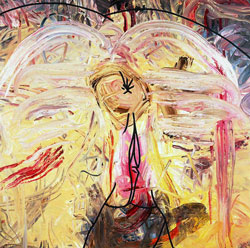 Marcus Harvey
My Arse is Yours

213 x 213 cm
Through his paintings Marcus Harvey explores pornography as a phenomenon of frustration. Using the instantaneity of paint, Harvey builds his canvases up as raw explosions, his brushwork capturing the urgency and sheer physicality of sexual fixation. Tracing over his gestures with images taken from top-shelf zines, Harvey places his desire in the teasing world of pop, uniting detached graphic image and aggrandised emotion as a parody of media portrayal and Pavlovian response. 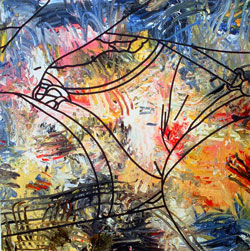 Those familiar with the work of Marcus Harvey primarily through his piece at the Sensation show will be in for a sensation of a different sort at Mary Boone Gallery. "Myra" (1995) employed children's handprints in an image of a child murderer. No portraits of serial killers here; the gallery is dominated by three large (61/2 x 16') still lives of dildos, vibrators, and the detritus of what is known in England as an "Ann's Summer Party." This, it was explained at the gallery, is like a Tupperware party, but not for Tupperware.
Who knew? So, amidst the sex toys one finds pizza crusts, glasses of wine, stacked plates, and full ashtrays. This holds for two of the paintings; a third offers an overhead view of a bureau, with two top drawers open to reveal what one assumes were purchases made. This painting offers a key to the formal and semantic arrangements of the paintings, revealing visual interest far more considerable than the initial shock value, such as it is.
One drawer is dominated by the warm tones and vertical shapes of the toys, the other by the cool rectangular shapes of folded clothes. The bureau top, seen from above, establishes a mediating art historical reference. The painting on the wall opposite is similarly divided roughly down the middle by two pillars of a black and a red sex toy-looking totemic with pleasure-delivering animals perched near the base of each. The division of the painting suggests a whimsical opposing of social spheres, with a good deal of messy spillage from one into the other: on one side the domestic references of stacked dirty dishes and party leavings in cool tones, on the other dirty (in another sense) sexual apparatuses in hot reds and pinks.