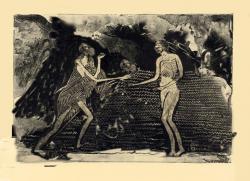 Markus Selg’s myth-based work dares the viewer to reconsider contemporary art as all-encompassing, immersive and universal. His printmaking, sculpture and video-based practice is infused with recurring themes from world art history, and merges traditional craft and technology to re-spiritualise the role of the artist within a contemporary context.

Selg works in unusual self-isolation from his times quite literally: the artist has retreated into the woods in order to work, donning the role of the traditional craftsman and exploring the idea of self-sufficiency that accompanies it. At the same time, Selg takes advantage of the latest computer technology to produce multi-layered images like the dreamlike Vorahnung (Premonition) and the colour-saturated Angelus (both 2010), recalling the imagery and symbolism of earlier visual traditions of the German Romantics and Expressionists. 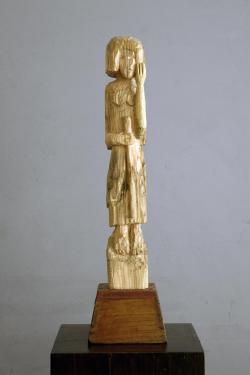 Thematically, night, nature, sex, life and death fill works such as the quasi-Biblical Traum der Sarazenin (2007) and the Gauguin-esque Searching for Ruwenzori (2010). Similar ideas around the life cycle, human loneliness and other allegorical states haunt his dramatically posed figures made out of plaster, jute, metal and wood. Mild und Leise Wie Er Lächelt (2008), which looks like a Buddhist icon, is more intricately ornamented and polished than more recent works from 2010 based on drawings, which free the figure with a more essentialised representation. Trauernde (Mourner), Betender, Eva, Anima and Abgrund (Abyss) show the artist continuing a three-dimensional shedding process and a tendency towards rustication, seen in the roughly-hewn Bench (Tiger) and Chair (Hanush) (all 2010). 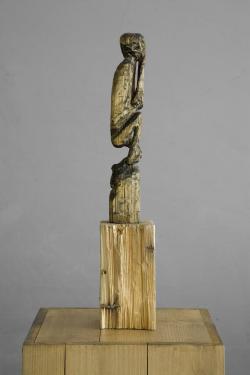 The imagery in the works shown here is inspired by life and creation. When asked about the imperfections embedded in them, Selg refers to the sense of almost spiritual, single wholeness permeating his practice. ‘All of The Creation is perfect…The less you care about form and the more you are able to follow your intuition, the closer you can get to a truth, which is not only following the outer world. The cardinal example of a Gesamtkunstwerk is life itself.’ 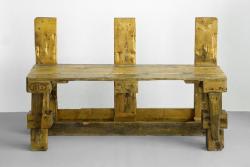 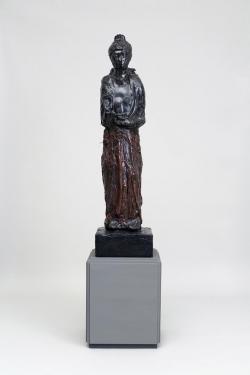 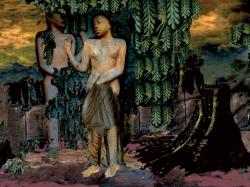 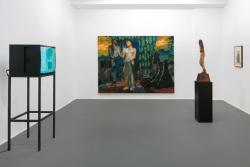 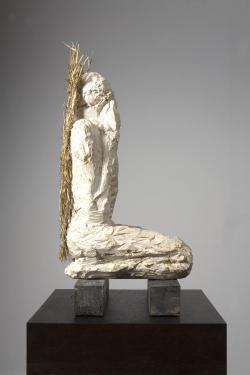 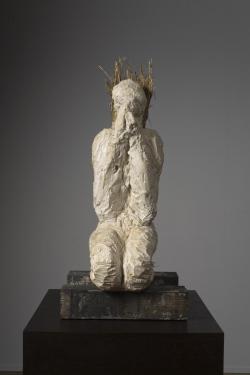 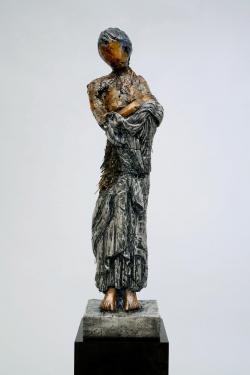 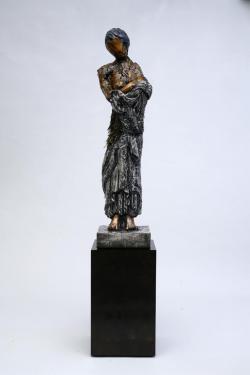 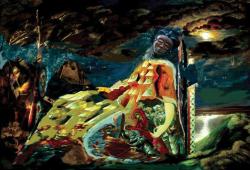 
Peering into Markus Selg's atmospheric installation through its hanging sackcloth doorway is to come blinking out of the Hackney light into the Black Forest. Or, more specifically, into the wilds and mountain ranges of the Czech Republic, where the artist lived in self-imposed retreat while whittling away at these naive pagan carvings and pieces of homespun furniture.

His neo-romantic idea of the artist as lonely backwoodsman - an almost literal translation of Nietzsche's â€ąbermensch or Superman who brings forth culture from uncivilised hands - is both staggeringly authentic and highly staged. The lighting is theatrical, the primitive prints actually digitally made and everything is placed knowingly just so. Yet his primitive sculptures of an Adam and Eve coupling and two solitary, totemic idols, speak of old-fashioned handiwork and a bygone devotion to craft, a quaint notion that is backed up by Selg's epic half-hour film, 'Destiny'.

One whole wall screens the heroic tale of an artist who trudges through crisp white tundra, falls to his face in exhaustion and then miraculously rouses himself back to life. There's more than a whiff of Werner Herzog to the beautiful, glacial imagery, the accompanying arias and his impressive attempt to truly inhabit the outlander persona (turns out Selg has shown alongside Herzog), all of which adds to the immersive theatre of the show, topped off by a pair of rustic, charred wooden boxes containing glowing dioramas of biblical, backlit skies awaiting their miniature players.

The second room doesn't quite reach the same heights, through its repetition of the penitent video bench and retro prints, but stays on the right side of 'Blair Witch Project' spookiness. Selg aptly titles the show 'A New Beginning', because not only is he the heir to German expressionism and the origin myths of Anselm Kiefer, but he also offers a way out of such stylistic cul-de-sacs of the past. A true Renaissance man, or as they say in German, an Allroundtalent.