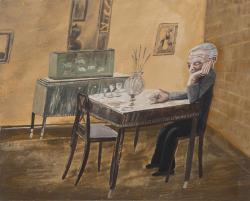 In the hands of many of today's younger practitioners, painting is by definition a many-sourced thing. The small, fraught painted panels with which Martin McMurray, a San Francisco artist, is making his New York debut, are beholden to Philip Guston, Goya, Forrest Bess and George Catlin, as well as the comics, early American portraiture and African sculpture. Despite such widespread debts, or possibly because of their span, Mr. McMurray's works manage to be promising.
In each image we see one or two crabbed, crudely rendered figures, or sometimes an animal against a fairly solid ground of color or in a minimally evoked landscape. An enigmatic, possibly tragic vignette is suggested. Some with human-headed horses tend toward myth, although one of these is titled ''Lorca.'' More often America and its racial history are invoked.
This is most overt in ''An Unlived Life,'' in which a hang-dog Abraham Lincoln in overalls bends over a wheelbarrow -- the Great Emancipator in need of emancipation. In ''What is Illuminated After the Storm,'' two brown figures -- an alert infant and a dead or sleeping man -- occupy a sodden plain of brushwork. In ''From the Sea,'' another dark-skinned man perches above a vividly turquoise sea behind a vividly pink fish with a monstrous face. ''Versickeltes Tier (A Complicated Beast)'' shows a small, naked figure kneeling before an enormous if rather benign-looking buffalo.
Literate without being literary and painterly in a tortured sort of way that could become affected, these works are ambitious in several directions at once, and arresting.

The first time I walked by Susanne Vielmetter‚Äôs booth at Art Forum Berlin, they were installing a larger work that overshadowed most of the booth. I decided to swing back at the end of the show just to make sure that I didn‚Äôt miss anything. After all, this was one of the rare booths from America and I wanted to see what they had to offer. Good thing I did or I would have missed a series of works by San Francisco based artist Martin McMurray.
Set against a monotone background, each canvas depicts a political figure seated in a car along with a small flag indicating the origin of the passenger. There is a cartoon like quality to the works due to the proportions of car and driver, but at no time are the works silly. The canvases are accessible, aesthetically pleasing, and just plain fun! The gallery displayed the paintings (each at 30‚Äù x 40‚Äù) in a grouping of 16. They are magnificent to look at all together, but they are definitely strong enough to stand by themselves. The only hard part now is deciding which one to buy.