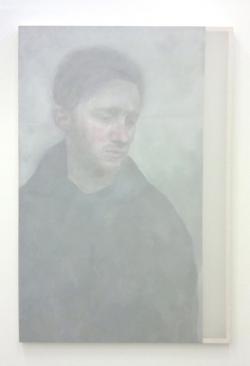 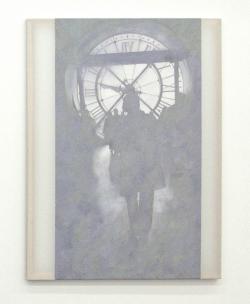 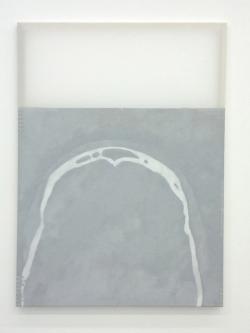 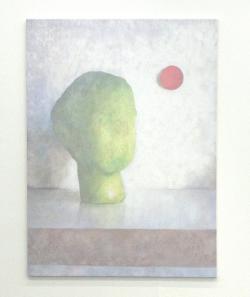 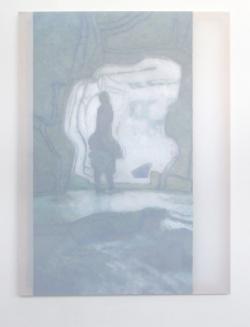 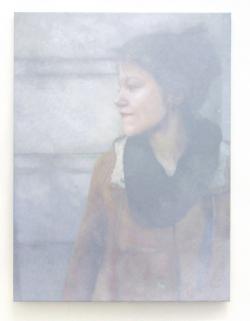 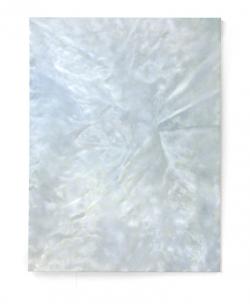 Martineâ€™s paintings explore the complexity of portraying the nude, many of the paintings are distortions of a female nude. Although, she has said that upcoming works would also include male bodies (once she has found the right model). She objectifies these bodies and effortlessly reveals their physical privacy. These jaundiced, malnourished, and at times abstract paintings of a prominent spine or vagina challenge our notions of intimacy and abjection.
The interim show had a broad range of works on display, several installations pieces such as a vintage racing bike, a black cocoon-like space for a video projection, and a mixed media installation by one of our favourite emerging artists Erik Larsson (read our interview with Erik here). Martine presented a female nude painting, Still Smeared (And other Stories of the Eye), which immediately draws you towards the work with its distorted and frantic figuration. The unhealthy yellow pigment, prominent ribcage and pubic bone, and a layer of wax applied across the painting only add to the physical and emotional discomfort portrayed.

Martine mainly works with oil on canvas but recently she has been exploring other materials such as polyester restoration fabric, glass bead, wax, and glow paint - which she is still waiting to use for a painting. She has a fascination for skin and she explores this heavily in her work, as skin can be "the physical element that segregates the self from the other, as well as the potential container for both." She often aims to maintain the anonymity of the models by manipulating the most recognizable features or painting bodies with an emphasis on certain body parts. These intimate depictions also allude a voyeuristic curiosity and unease.

The Vibe Gallery is showcasing Martine Poppe in a Solo Exhibition. Her form and technique is of a quality that needed to take centre stage. This exhibition will be showing the very best of Martinesâ€™ recent work giving you the opportunity to appreciate first hand this up and coming talent.
Martine Poppe explores perceptions of otherness, the abject and desensitisation on primarily large scale canvases of extreme body types and explicit sexual acts. Charged with a heavy voyeuristic tension, the work hovers between simultaneously emphasising a sense of the human body and emotions whilst also being seemingly dehumanising.
Often using the anonymity of found imagery and faceless compositions, she embraces the objectification of these bodies, placing an emphasis on their physicality and that of the paint. As a counterpoint to the figurative, larger canvases, Martine Poppeâ€™s Skin Tests emphasise relationship between the skin and paint further, as these decontextualised textures focus on the desire to reveal a physicality of the human body and paint.