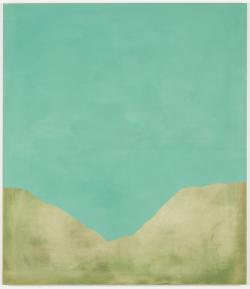 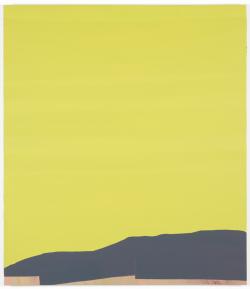 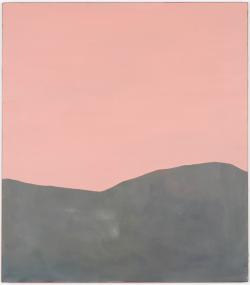 Not yet graduated from the Royal Academy, Mary Ramsden has already pretty much mastered her painterly approach: a kind of elegant, fairly sensuous restraint. 'Untitled (white short sleeve)', a relatively hectic example, looks something like a close-up of a lime-green geometric glyph on a green-grey background. The title doesn't really compute, so one keeps looking: noting areas at the edges where the paint has been rubbed away, the directional sweep of the lime.

Ramsden recalibrates the viewer's reaction to the painting via minimalism: very much a stratagem, but one well accomplished here. 'Untitled (show of hands)' presents a valley-like form in rubbed, pinky-green paint under a dense aquamarine 'sky': the substratum of detail here involves ghosts of the stretcher bars where the paint has been rubbed, and the sides of the canvas painted a deep lime. The colours recall those of a sun-faded '70s photo, and indeed Ramsden puts a lot of weight on very specific colours. One small painting, a soft-edged monochrome, is the shade of sunburned flesh; another, 'Untitled (cord trouser leg)' swipes thick smears of white across pink underpainting.

Whether the titles intend some kind of Howard Hodgkin-esque evocation of memory through paint or just aim for cognitive dissonance, Ramsden regularly ends up with something satisfyingly dense where there appeared, at first blush, to be almost nothing at all.

Either way, undoubtedly what holds my attention most here are the paintings, which pursue a slightly different path (or maybe cover their tracks better). In Mary Ramsden‚Äôs modest misshaped canvases, which either bend gesture to their weird contours or are cut to fit her strokes, wayward and watery brushwork is nearly obliterated ‚Äì though glinting, unoccluded patches remain at the fringes ‚Äì by heavy, wide, almost mechanical swathes of monochromatic paint, while Simon Mathers lays unanchored little strokes or delicate doodles of trees into toffee-coloured confections of varnish and oil. In each artist‚Äôs case, the majority of the painting seems almost theatrically antagonistic to a fragile glimmer of vivacity within it, and the glimmer is what holds your eye. Of course, this might be as false and studied and nostalgic a position as the downbeat, tech-entranced circuitousness elsewhere on show. But offered knowing hopefulness or knowing gloom ‚Äì particularly in summer ‚Äì I‚Äôll take the former.

Mary Ramsden‚Äôs practice is unapologetically painterly. Strategically refusing referential readings, she makes painted objects whose compositional unity belies the complexity of their making. In Ramsden‚Äôs work even the most subtle adjustment is generative.
Each shift in palette, variation in scale, or nuance of mark effects an incremental development within a broader scheme of experimentation. On the occasion of her first solo exhibition in London, Ramsden has created a series of works simply presented in interrelated groupings. Implicit in this body of work is a tension between the conflicting actions of ‚Äòdoing‚Äô and ‚Äòundoing.‚Äô The exhibition oscillates between quieter, meditative works created predominately through the reversal or canceling of previous marks, and bolder pieces in which vividly hued asymmetrical forms actively dominate the surface. This antagonistic give and take extends to the method of their making. Working flat against the studio floor, from a position of authority and control, Ramsden negotiates the pictorial plane as a zone of impact and reaction, working with resistance until the point at which the dynamic conflicts of making are calmly resolved.
A recurring theme in Ramsden‚Äôs work is a preoccupation with the edge: a concern that is realized formally and pursued methodologically. What is at stake in these works, sometimes ambiguously titled otherwise left unnamed, is a pushing to the limits. Using the canvas as a testing ground they question how far might the mark go?