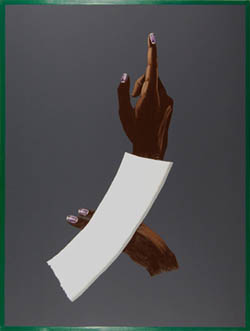 Matthew Cerletty’s paintings encapsulate a cosmopolitan air with their voguish finish and ambivalent sexuality. Presenting a fragmented body, Cerletty’s Untitled trades image for the fetish of gesture, his absent figure reduced to an intimation of style. Rendered as graphic form against an empty slate coloured ground, Cerletty’s hands seem strangely foreign and empirical. Classically positioned, Cerletty sets his study as abstracted intrigue, his opaque white sleeve and purple nail polish convert the representational to formalist balance, constructing the sublime through the simplicity of casual expression. 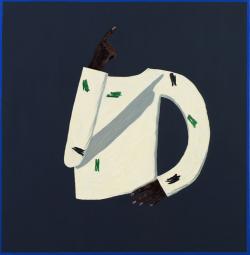 284.5 x 276.9cm
Matthew Cerletty‚Äôs Untitled reconsiders the figure as an abstracted strategy of design. Set on a cold ground, his torso is centred as an obsessional focus of concentration. Rendered with painterly impasto, his shirt becomes a slacker study of illusionary space: its simplified cartoon form balancing between graphic flatness and 3D perspective, the stylised shadow alluding to sculptural form reinforces the planar surface. The addition of the hands converts Cerletty‚Äôs painting from compositional study to relational subject, infusing traditional line, shape, and tone with dandyish and charismatic personality. 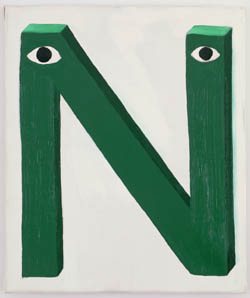 30.48 x 25.4cm
Mathew Cerletty‚Äôs work ranges fromaccutely rendered realist paintings and drawings to text based work distilling images of lifestyle ideals. Throughout his practice Cerletty defines the rules of attraction, using the formal qualities of painting to explore the principles of beauty and fixation. In N, traditional imagery is exchanged for a simple letter: a person‚Äôs initial, empty logo, generic mark, or graphic design. Set on a textured white ground, the letter‚Äôs painterly domination commands with its force of expression and charismatic humour. Rendered in envy-green and adorned with anthropomorphic eyes, N assumes centre of attention as typeface of sheer vanity.

Buying Into the Pleasure Principle By Catherine Krudy

A week before the spring equinox, New York's contemporary art world holds a few pagan rituals of its own. A month from now, the Armory Show and its unofficial satellites like the Scope Art Fair will invoke a frenzy of buying, browsing, and boozing. Dealers select their wares as collectors compile their wish lists. If other art shows, such as the Miami Basel, are an indicator of things to come this March, sales should be brisk. The show's hottest sellers will probably be products of a recent phenomena surrounding hip young forces in the contemporary art scene‚Ä¶

While still absent from the current official list of exhibitors at the Armory and Scope shows, Rivington Arms is likely to show at one of the fairs. Wherever they chose to exhibit, they will likely feature work from the precocious Mathew Cerletty. Cerletty's strong figurative paintings sold well at Miami Basel and his career shows no sign of letting up; a new painting of his was recently included in a group show at Andrea Rosen. The show, entitled "Now is a Good Time," was curated by a collector who stated in the press release, "It's something of a Romantic time--a moment when younger artists especially are privileging feeling over analysis, the handcrafted over the mechanical, and sincerity over irony." The moment he identifies, however, presents only a shallow reflection of original Romantic styles. The proliferation of sensitive and sweet works which fall under this Romantic rubric is easy on the eye and, in the process, leaves something to be desired.