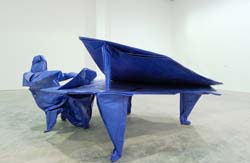 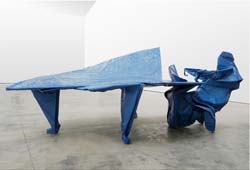 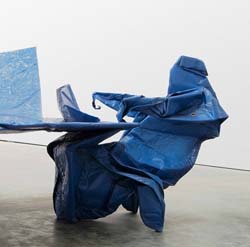 147x 340 x 198cm
Matt Johnson‚Äôs sculptures delightfully explore the paradox of visual forms through unorthodox and surprising materials. The Pianist (After Robert J. Lang) pays tribute to the American physicist and master origami artist who has astounded with his mathematically complex objects crafted from creased paper. Rendered life-sized, Johnson‚Äôs giant origami masterpiece is made from one 50 foot piece of tarp folded into the shape of a concert grand piano and player, humorously honouring genius with floppy monumentality. Johnson‚Äôs choice of blue wrapping is a clever reference to Yves Klein ‚Äì whose signature International Klein Blue (also a scientific marvel) is synonymous with sublimation and glamour ‚Äì theatrically elevating his wonky musician to iconic design status. 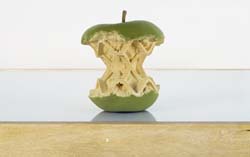 9.5 x 7 x 7 cm
Titled after the very first species of apple from which all other ‚Äòforbidden fruit‚Äô has evolved, Johnson‚Äôs Malus Sieversii is a life sized wooden carving of the fruit most associated with computers and record labels. Within its mostly eaten flesh, Johnson‚Äôs etched a miniature Escher-esque staircase, winding endlessly up and down the core. Drawing on both religious and scientific references, Johnson‚Äôs hand-crafted emblem of original sin humbly poses as a microcosm of sublime wonder and contemplation.

I was going to begin this by saying, "Here's a promising young artist who might otherwise pass under your radar." Then on March 21, that artist, Matt Johnson, threw me for a loop. A Times Sunday Styles section article titled "New Artist in Town" was all about Johnson and how "more than one collector asked to buy the entire show." As if that weren't enough, I was mentioned as someone who shook his hand at the opening. And we thought late-'90s hype was safely behind us.

This splashy and off-putting print debut aside, Johnson has a way of worming into some nicely dicey sculptural terrain. He makes idiosyncratic yet everyday-looking objects that stand out and simultaneously blend in. Formally, he works in a familiar if somewhat surrealistic mode between the material ingenuity of Tom Friedman and the pensive obsessiveness of his former teacher Charles Ray. Yet Johnson is very much his own artist.