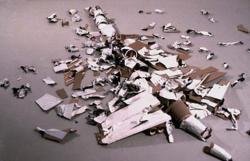 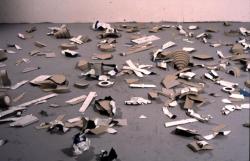 
‚ÄúNobody who has paid any attention to the peculiar features of our present era will doubt for a moment that we are living at a period of most wonderful transition‚Ä¶ The distances which separated the different
nations and parts of the globe are rapidly vanishing before the achievements of modern invention, and we can traverse with incredible ease; thought is communicated with the rapidity, and even by the
power, of lightning‚Ä¶‚Äù Prince Albert, 1851 World‚Äôs Fair

Matt O‚Äôdell‚Äôs sculptures and installations explore ‚Äòmicro-societies‚Äô and groups who, often tired with orthodox ideas, have attempted to forge their own belief systems. For the last five years, O‚Äôdell has developed works which primarily take the form of architectural models often accompanied by audio. The artist‚Äôs use of model-making is a means to many ends. Firstly, it enables him to explore the flow of information and new concepts around the modern world. How, he asks, has the nature of belief changed in a media-saturated world? Secondly, it enables him to examine the relationship between fact and fiction in the news and in art. As events are only known through their representation, are they inevitably myths? Whilst O‚Äôdell‚Äôs practice encompasses a spectrum of concerns, his works can be grouped under three related themes: disasters, cults, and conspiracy theories.