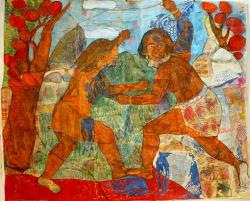 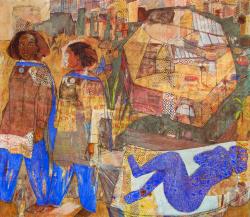 Cobalt blues, saturated crimsons, and golden ambers provide the ground for a cohort of fantastical figures in the canvases of artist Mequitta Ahuja. To enter a room of her work is to enter a very personal cosmology in which Ahuja fluently appropriates ancient works of myth and legend, such as the 15th century Persian manuscript The Hamzanama and Hindu miniature paintings. 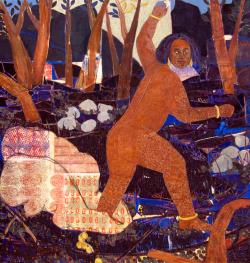 Oil, paper and acrylic on canvas

These sources are woven into a pictorial style that is both autobiographical and trans-cultural; the figures are often self-portraits rendered in a process she names autocartography. The richness of her visual language vividly conveys her personal conviction that identity is ours to fabricate. Of primary concern to me is the agency we have to self-invent and self-represent... creative processes that are necessarily bricolage. We draw on personal and cultural history as well as our creative imaginations. 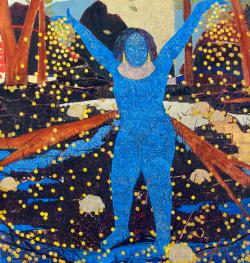 Oil, paper and acrylic on canvas

Works that have a paper ground, such as Autocartogrpahy I and III, Rhyme
Sequence: Wiggle Waggle, and Rhyme Sequence: Jingle Jangle , are formed
through painstaking layering of stamped printed textures using a variety
of tools such as Indian textile printing blocks, letterpress type. Others are
painted onto vellum; a stretched animal skin that was used in ancient times. 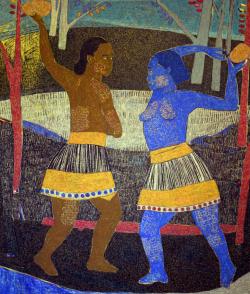 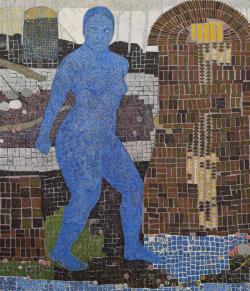 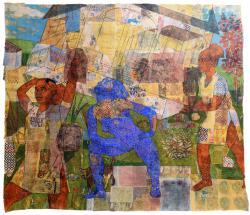 There‚Äôs a wide variety of style and technique on display in ‚ÄúDrawing on the Edge,‚Äù the seventh in the National Portrait Gallery‚Äôs envelope-pushing series of contemporary portraiture exhibitions, ‚ÄúPortraiture Now.‚Äù Organized around the theme of drawing, the six-artist show includes watercolors (by Till Freiwald), mixed-media paintings (by Mequitta Ahuja) and digital video (by Adam Chapman), along with examples of traditional drawing in charcoal and graphite.
Yet even among those artists whose technique hews more closely to old-school notions of draftsmanship, there are intriguing deviations.
Most of the other ‚ÄúPortraiture Now‚Äù artists also utilize reference photography, along with some combination of direct observation and drawing from memory. You can even see the shutter-release cable used by Ahuja in her colorful self-portraits, which feature photos and video of the artist ‚Äúperforming‚Äù to reimagine her in the guise of figures from history and myth.
But photography is not the sole connection between the work of these disparate artists. Rather, it is the elusive nature of truth itself.
For Ahuja, her art is less about identity than invention. Her self-portraits suggest that who a person is involves more than what she looks like. Similarly, Matthews‚Äôs portraits call to mind religious iconography; his subjects almost take on the attributes of a patron saint, represented by a talismanic object.

If, in the beginning, there was The Word, drawing is the backbone of art's creation story. The first figures Western Man created were with the knottily vigorous strokes of a stick dipped in animal fat. Whatever one may think of their artistic value, they have an eerie immediacy even today. It would be no exaggeration to say that drawing is at the very foundation of representational imagery ‚Äì all imagery, in fact. How its precepts are filtered through cultural meanings as well as how inventive one may be, are part of a history that is as old as man. And until after WWII, drawing was seen and appreciated on a worldwide scale. Since that time, other graphic media, as well as electronic facsimiles, have begun to replace it - though mostly in commercial sectors where immediate impact carries the day. Yet the urge to put pencil, charcoal, and other media to paper is in a thriving condition, but mostly in the studio and classroom. Whereas commercial applications supported artists "back in the day", the university allows our nation‚Äôs drafts-people a livelihood while they experiment with old forms as a way to extract fresh meanings. It is good that these men and women have a gig. Though drawing is painting‚Äôs foundation stone, it has been relegated to our culture's remainder bins and basement hideaways. Because there has been such an explosion of alternative forms, drawing isn't - as one might say - what it used to be. Pundits have knit their brows about the death of art ever since the advent of photography. And they might have better reasons to be gloomier about it - should they care to think of it at all - than ever.
Yet at the National Portrait Gallery, we are given an entirely different message. Drawing, as it is practiced in America today, is very much alive and is no more likely to fade than the electronic media that squeak and gibber at us twenty four/seven. Our heartiest thank-you‚Äôs should be extended to the curators of "Drawing on the Edge", which opened in November. They have assembled a bewildering array of images - most of which can be said to be drawn ‚Äì by men and women who are at the top of their game and likely to stay there for some time.
I want to start with the group's least likely representative, who has taken her identity and scrambled its fragmentary toe-holds together. She is Mequitta Ahuja and was born in 1976 . Her identity politics ‚Äì which she describes as ‚Äúauto-mythic‚Äù - are refreshingly personal while her iconographic style has the qualities of an illuminated manuscript, folk mural, and shy self-portraiture. To select a random image, Royal Ease is a patchwork quilt of stamped-on symbols, color-fields, stencils, and a cross-eyed, cross-legged lady who holds a computer mouse in one hand and makes a fist with another. It is an audacious piece of work, and makes, like all of her work, an immediate impression.