Acrylic and Thread on Canvas

ins and outs is a sublime dream home. Steely grey in the dead of night, manicured in the expansive landscape, trees in a straight line, boulders placed decoratively for maximum effect: it might be the retirement retreat of a Silicone Valley millionaire, the kind of person who would bother to have their trees pruned into perfect orbs, who’d insist that their sky be as delicate as a Japanese watercolour. Michael Raedecker’s paintings are always little seeds of gossip. Drawn to this house by the impossible intensity of the light - made up of countless tiny pink and yellow threads - the first instinct is that something suspicious is happening within.

The Dutch have always been masters at still life. Michael Raedecker’s flowers have a subtle quality of unparalleled grace captured in a glow of intellectual order and mathematical refinement. He presents a canvas and a half as one: a classical and elegant subject doubled, like gliding seamlessly from one film still to the next. The heavily rendered bouquet almost acts as a propellant weight. Stitched delicately along the background, an attenuate tangle of lines provides a further sense of motion. Reminiscent of sheet music, Michael Raedecker presents a painting with the enveloping ambience of a film complete with soundtrack. 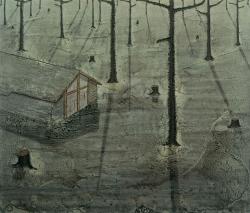 Acrylic and Thread on Canvas

Michael Raedecker is a big fan of film, especially anything with a grandiose American landscape, the untamed freedom of the west. In beam he paints a lonely cabin in the woods - but this is no ordinary night scene: it’s almost like the painting has been solarised. A strange halo glow radiates from the trees, the crackling surface of the ground flickers between positive and negative light like an unnatural frost effect. There are shadows everywhere, distinctly pronounced in a conscious mirroring of the image: a double painting in one. This is a scene which is impossible in nature but completely commonplace in Michael Raedecker’s imagination and in spaghetti westerns. Raedecker got the idea from night scenes in old cowboy flicks, which were shot in the daytime with a filter over the lens. 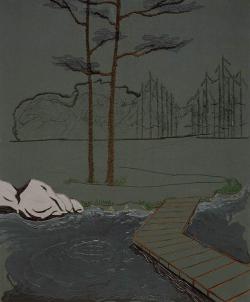 Michael Raedecker paints his woodland getaway in the night air. Breaking down the composition to the barest colour-field essentials, he sketches in the details with delicate stitch work: thick wool standing in for tree bark, fine silk threads tracing the enmeshed patterns of the distant trees, the shimmering ripples in the stream. The effect is a captivating stillness, an atmosphere of too-quiet isolation, a setting for leisurely (or illicit) escape. 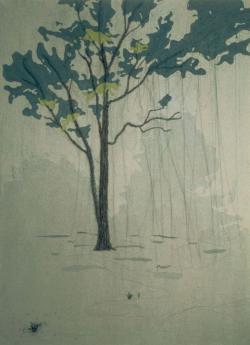 Acrylic and Thread on linen

Both prop and occluded utilise the material of their media to push the boundaries of representation: the illusion of space, the believability of how a subject sits in a canvas. In prop, Michael Raedecker’s tree is firmly anchored to the ground by real string, as if the leaves, by being rendered in paint and not thread, might float in their aqueous form off the canvas. 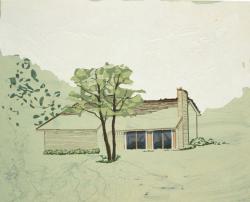 In occluded, Michael Raedecker’s cottage sits in a poured environment: the dappled green background made up of layers of caked paint. He obliterates the top half of the canvas as sky: the thick white puddle the densest part of the painting, threatening to consume the scene with its illusionary weight. 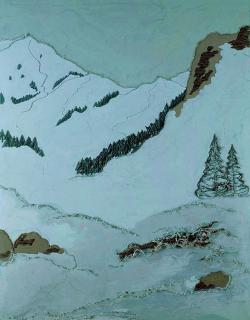 Michael Raedecker’s paintings engage with craft tradition in a sophisticated way. Self-consciously bordering on kitsch, frisson personalises the genre of epic landscape painting. His vast mountains, created through layers of generously poured paint possess an icing-like texture; the trees are made of thick wool, stitched with rustic gusto. The sparkling highlights glitter in the snow from embedded lengths of metallic twine. Through his folksy technique, Michael Raedecker draws intimate connotation to his sublime theme: he portrays this vast emptiness with the cold comfort of homeliness. 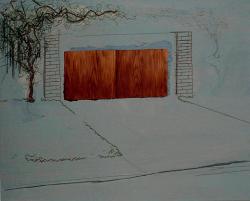 Michael Raedecker’s paintings of houses and landscapes are situated in a nowhere place. Intimately familiar scenes are estranged from recognisable tangibility, made distantly remote through their conscious resistance to ‘being’. In still, Raedecker’s garage door has the subliminal quality of a mirage. From the blank suggestion of the grey ground, tangled threads ‘grow’ as if by their own accord and the wood tile is conspicuous by its ready-made sourcing. Raedecker’s image emerges from the tautology of the materials: it’s the physicality of the surface which gives rise to its chimerical effect. 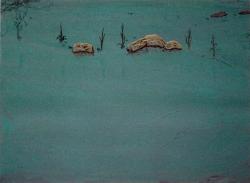 Themes of solitude, tranquillity and emotional isolation run through Michael Raedecker’s work. In his paintings, Raedecker conceives nature as an idealised environment, both as a luxurious privilege of escapism and a sinister realm of the foreign. In deep, he paints a fragmented view of a lake. The solid steely blue surface seduces in its rich colour, the texture of ripples is formulated by painting over stitched designs. Michael Raedecker fabricates this scene with attenuate sensitivity to the painting’s surface, as if trying to postpone the inevitable thought of what lies beneath. 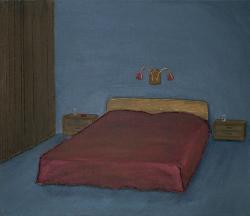 In room 5 Michael Raedecker creates the sensation of deadened slumber. Space is an important focus in his work. In this small painting, the dark colours have a calming effect: their claustrophobic intensity suggests the infinity of internal space, an endless numbness of psychological tension. Michael Raedecker gives a sense of paralysing weight in the chunkiness of the bed and tables; the lamp above the bed seems to bend under this sinking pressure. 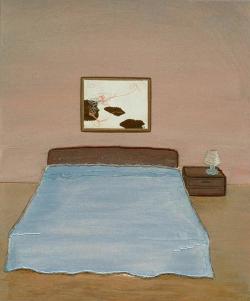 Nature is often used as a symbol of emotional solitude in Michael Raedecker’s work. In room 4, his furnishings float tenuously against the beige ground: there’s a sense that this scene has been transplanted to a barren desert. Michael Raedecker literally fixes these elements in place with crude stitching as if to confirm their existence isn’t a dream. The small picture above the bed is reminiscent of Raedecker’s later landscape paintings; it lends a further confusion between the idea of interior and outdoor space. 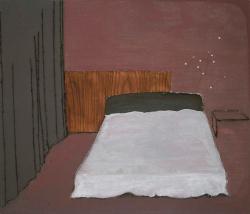 Michael Raedecker’s early paintings of hotel rooms reveal the artist’s elaborate conception of reality and illusion. Completing his painted surface with collaged elements of veneer and yarn stitching, Michael Raedecker’s room 2 is represented pictorially as well as through the texture of the materials: real wood is representative of panelling, the fabric of the curtains is alluded to with actual stitching. The suggestion of a table and the tiny embroidered white spray give way to a sense of ephemeral disintegration: a suggestion of loneliness, isolation and forgotten rendezvous. 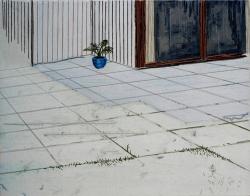 The notion of time is a predominant interest in Michael Raedecker’s work. His empty, haunting images are often compared to film. The studied framing of his canvasses suggests immanent drama: they operate like the in-between scenes of a continuous yet illusive narrative. The mystique of Raedecker’s work lies in the negative space. In shot, Raedecker painstakingly embroiders the lines defining the scene. Through this time-consuming process, Michael Raedecker doesn’t paint the image itself, but rather the space of its suggestion. 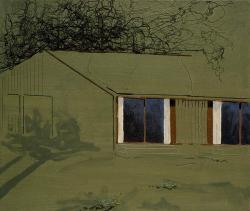 In scene, Michael Raedecker paints the ghost of a house, its banal form conspicuous by its absence. Raedecker consciously omits the building; the subject of his painting becomes the mysterious space surrounding the known. Raedecker subverts the banality of the scene through the organic turbulence of embroidered detail. The surface of his painting is a microcosm of quiet disorder. Carefully crafted flowers and the precision of taught threads constructing the architecture lend a surreal element in their fuzzy texture; the mass of string composing the tree spills haphazardly over the canvas, trailing lines and fissures both above and beneath the paint. On close inspection, Michael Raedecker’s paintings offer a quiet topography in their surfaces, revealing an inner-life to scenes of common placidity. 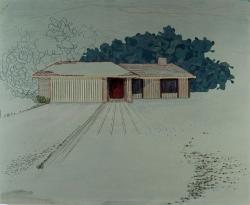 "When you are young, you have an antenna for knowing what is important for the time and this turns out to be your style. I want to make work which is relevant to now, but I hope it won't become old fashioned in two years time, I hope it survives a number of years."
Michael Raedecker's approach to painting is to give traditional subject matter a new twist by using methods and procedures of picture making not usually associated with image based painting. Interiors and exteriors reminiscent of a more classic tradition are created from yarn and poured paint. This collage establishes for the viewer, from a few scant details, a striking graphic which resonances strongly within our collective recognition making a painting, suggestive of a disquieting and disturbed world. Using a palette of muted colours in close tonal relationships, empty hotel rooms and modern 'dream houses', he turns a romantic view of the past, into a would-be still from a chilling scene of the crime reportage from documentary television.


These embroidery nodes go way beyond any discussions of thread's sex. They act as ontological focal points. Michael Raedecker uses materials as if to generate a classification system or hierarchies of reality; stirred paint for rocks, wool for mountains and curtains and large plants, cotton for shadows. But they spill into each other and break down and anyway suggest a model which is internally meaningless. In contrast to the undifferentiated mass of paint, thread is less solid (a standard unit only so thick) but weirdly actual. The curtains are painstakingly built up from different thickness of wools and cotton (in graded tones of red,brown and green yellow), and the shag-pile rug is bobbled with milky pink-brown knots. It is what they would be made from in the world.