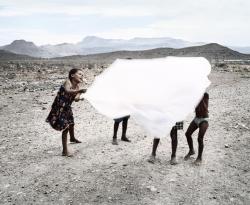 Like so many fine photographers, Mikhael Subotzky drifted into photography in 2000 as an eighteen-year-old backpacker intending simply to document his travels, and got the bug. Aware of the great tradition of documentary photography, and particularly inspired by David Goldblatt’s In Boksburg (1982), he set out to make a portrait of a small, post-apartheid town that would address marginalization and incarceration, two facets of the violence wracking the country. 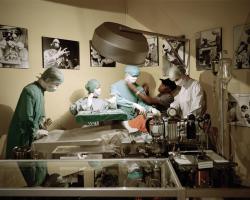 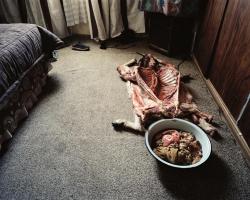 Beaufort West was his choice, a hardscrabble place located roughly equidistant between Cape Town and Johannesburg.
In the best tradition of the extended photo essay (happily the work has been published as a book), Subotzky gives us a balanced picture of the place and its people, the drunks, prostitutes and prisoners at the bottom of the heap; the grim-faced whites holding onto their privileges at the top. 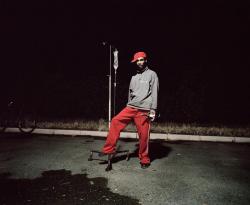 Mikhael Subotzky
Leon (At The Back Of The Hospital), Beaufort West Hospital 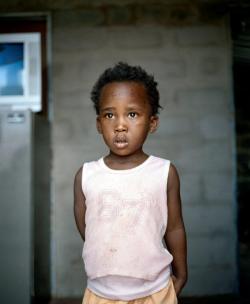 Most wrenching is a picture of a dazed young girl with the words ‘Fuck Me’ written on her forehead – the idea of a joke, the photographer tells us, of her drunken parents. It’s a depressing reminder that the ghosts of apartheid have yet to be laid to rest. 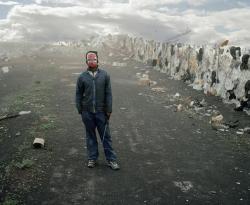 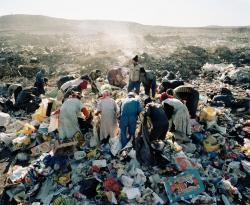 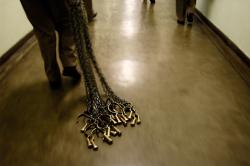 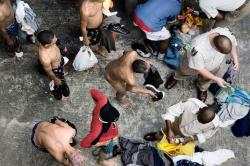 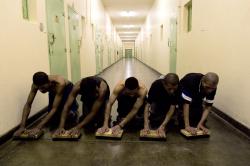 THE WORK OF MIKHAEL SUBOTZKY
02 February, 2010, by Michael Salu, The Granta Blog

Decaying grandeur has a strange allure. Those imperious structures that once represented wealth and power, crumbled out of context by man‚Äôs destruction and nature‚Äôs ruthless erosion. Mikhael Subotzky and Patrick Waterhouse‚Äôs photographs of the dystopian Ponte City in Johannesburg intrigue for exactly this reason. To look at their images is to enter a compelling tale, narrated by the reassuring voice of the local griot. They lead you with authority through an unfamiliar and intimidating environment.
Subotzky‚Äôs work in particular is profoundly sensitive for one so young. The stories are preserved with an immediacy that grips ‚Äì but is in no way gratuitous. Like any good story-teller his presence is unobtrusive, allowing the viewer to absorb the atmosphere. Anyone with even a hint of claustrophobia will squirm at the very thought of the conditions we see in ‚ÄòDie Vier Hoeke‚Äô, Subotzky‚Äôs photographs of Pollsmoor Maximum Security Prison in Cape Town. The Ponte City photo essay speaks in a similar voice. As with the prison series, it stresses the space that controls the movements and choices of the individual ‚Äì recalling Michel Foucault‚Äôs meditations on space, power and control.
Claustrophobia is a recurring theme in Subotzky‚Äôs work, but what is arresting about this collection of images, particularly the series of window shots, is the individuality that defiantly peeks through a coarse thicket of decay. It is as though watercolour prints of a city skyline have been ‚Äòcrowdsourced‚Äô, as each canvas is individually customised. The composition of these photographs depicts each window as a collage. Layers of idiosyncratic objects are framed with ghostly silhouettes, creating images of contrast and solemn beauty.
Subotzky is unremitting in his documentation of an underexposed South Africa, but the Ponte City series also displays an intimacy that contrasts vividly with the building‚Äôs bleak exterior. See the domestic scenes in which the lively colour of a young girl‚Äôs dress illustrates warmth and a touching dynamic among a family making home in quarters designed for one. Or gaze as the bathing couple seemingly at ease with sharing such an intimate moment with the world. Irony echoes in the vacant hallways of this building, whose seductive marketing material sells an experience with the exhortation ‚ÄòLIVE YOUR LIFE‚Äô.
Although Ponte City was conceived as a monument to aspiration in a country trying to embrace universal capitalism, it ultimately represents South Africa‚Äôs failure to develop an infrastructure that could contain the inevitable fallout from apartheid and its resulting class structure. If this summer‚Äôs World Cup is even a tenth of the spectacle witnessed at the Beijing Olympics in 2008, a cloying fairytale of smiles and colour will be the prevailing image. We need artists like Subotzky and Waterhouse who choose to expose the reality beneath the sugar-coated fa√ßade.

Mikhael Subotzky was born in 1981 in Cape Town, South Africa, and is currently based in Johannesburg.
Subotzky‚Äôs most recent body of work, Beaufort West, has been published in book form by Chris Boot Publishers and was the subject of the 2008 exhibition, New Photography: Josephine Meckseper and Mikhael Subotzky at the Museum of Modern Art in New York.
Subotzky‚Äôs work has been exhibited widely in major galleries and museums, and his prints are in the collections of the Museum of Modern Art, New York, the South African National Gallery, Cape Town, the Johannesburg Art Gallery, and FOAM (FotoMuseum Amsterdam).
Recent awards and grants include the Oskar Barnack Award, the Lou Stouman Award, the W. Eugene Smith Memorial Grant, the ICP Infinity Award (Young Photographer), the KLM Paul Huf Award, and the Special Jurors Award at the 2005 VIes Recontres Africaines de la Photographie in Bamako.
Subotzky is represented by Goodman Gallery, Studio La Citta, and Magnum Photos. For the past two years he has been collaborating with the British artist, Patrick Waterhouse, on an extensive new body of work based in a single building in Johannesburg, Ponte City.

This house in Beaufort West, South Africa, is home to the whole Mallies family. It's in an isolated, bleak desert town on the main highway between Johannesburg and Cape Town. The family survives on what 19-year-old Michelle - the girl sitting by the door - earns as a sex worker, and the father's disability grant - he is the man on the right.
I spent a couple of weeks hanging out with the family. This photograph was taken one day when they were drinking and joking. They don't drink often, but when the grant comes they drink quite a bit - maybe too much. Michelle's cousin Bonnita, who was living there at the time, stood up and started singing a church hymn in Afrikaans. She's the one with her arm outstretched.
I used a medium-format Mamiya camera with a 50mm lens to take this, using only natural light. I like the fact that the photograph contains multiple narratives - that's very rare. We're in the family's living room-cum-kitchen; through the doorway is the bedroom where they all sleep. The mother is the one standing with a glass in her hand, looking very contained in her thoughts. On the other side of the door frame is a calendar, a picture of Michelle's little brother, and Michelle's old school photograph and certificates. The boy on the bed is Michelle's son, and the girl is Bonnita's daughter.
You can also see a man lying there behind Bonnita and Michelle. He was another member of the extended family - a cousin of Michelle's mother, I think. His name was Joseph and he had tuberculosis. He died shortly afterwards.
Bonnita was in tears as she was singing. But I don't think the family were unhappy. They had huge battles, and theirs is a sad, messed-up situation. But, within that, people make meaning and happiness for themselves.
Curriculum Vitae
Born: Cape Town, 1981
Studied: University of Cape Town
Inspirations: Gideon Mendel, Jeff Wall, Martin Parr, Josef Koudelka and David Goldblatt.
High point: "Staging an exhibition in Nelson Mandela's old cell in Pollsmoor prison."
Low point: "A lot of what I see is difficult and doesn't make sense - it's a low point witnessing difficult things."
Pet hate: "Debates about digital versus film."
Dream subject: "People I meet, especially in South Africa. It is the one country I feel I know well enough to comment on."

The story of how Mikhael Subotzky first got hooked on photography is refreshingly unpretentious: he simply wanted to take snaps of the exotic places he visited during his gap year in Southeast Asia. But the 29-year-old Capetonian went on to photograph a very different world for his final portfolio at Cape Town‚Äôs prestigious Michaelis School of Fine Art, which explored the life inside South Africa‚Äôs prisons. ‚ÄòI was scared a lot of the time,‚Äô he said of his experience of being locked up with inmates. ‚ÄòI don‚Äôt think it is on a par with war photography, but it was a difficult environment to work in.‚Äô
It was all worth it though, as his portfolio earned him the best marks ever given at Michaelis. First exhibited in 2005 at Cape Town‚Äôs notorious Pollsmoor Maximum Security Prison, Subotzky‚Äôs student work also got him noticed by the photography world.
At only 25, he was snatched up by Magnum, one of the youngest photographers ever invited to join the elite photo agency. Subotzky then went on to exhibit at New York‚Äôs Museum of Modern Art. The show featured striking images from his Beaufort West project, which focuses on an isolated Karoo Desert town and the life of its impoverished inhabitants. ‚ÄòIt was quite a shock,‚Äô said Subotzky of his New York appearance, ‚Äòto suddenly find myself standing in a circle of people talking to photographers Josef Koudelka, Jim Goldberg and Elliott Erwitt.‚Äô

Mikhael Subotzky was born in Cape Town, South Africa in 1981 and is currently based in Johannesburg. In 2004 he graduated from the University of Cape Town, and his final-year project, ‚ÄòDie Vier Hoeke‚Äô (which translates literally as ‚ÄòThe Four Corners‚Äô), won him widespread international acclaim. The series was part of an in-depth study of the South African prison system, which led him to run workshops within the prisons, to teach inmates the basics of photographic theory and practice. The results of these workshops can be found on his website.
His work offers an amazing insight into the underbelly of life within the South African prison system. It shows prisoners not as inmates or criminals, but as human beings, living within a sub-culture that represents the unknown. We witness the moment that ‚ÄúJonny Fortune climbs out of the industrial washer after taking a bath in the laundry ‚Ä¶ (because) he dislikes the communal showers‚Äù, instead choosing to use his time on shift to bathe.
These images show us the ‚Äònorm‚Äô for a prisoner within this community. Which of us would choose to bathe in an industrial washer? The photographs represent a society that has created its own set of cultures and traditions within an institutionalised environment.
We see what appears to be prolific drug use in a prison community that is extremely over-crowded and under-funded, and the use of strip-searches enforced to counter this. We watch as inmates perform ‚Äúpasvang‚Äù, scrubbing the prison floors in rhythm to the song that they are singing ‚Äì an activity which was performed on slave ships which arrived in South Africa during the 17th Century.
Most importantly, we see documentation of an overcrowded, and what must feel like, an overbearing situation for a community which is paying the price for wide-spread poverty and crime. Like many before him, Subotzky is providing the viewer, and the people of South Africa, a window into moments we are not meant to witness; and by doing so, a unique insight into the lives of the ‚Äòother‚Äô.
You can see more work from Mikhael Subotzky at his portfolio