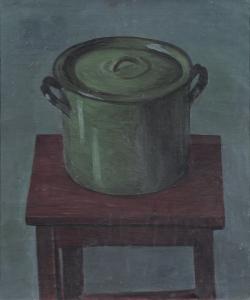 Mikhail Roginsky
The Portrait of the Pan 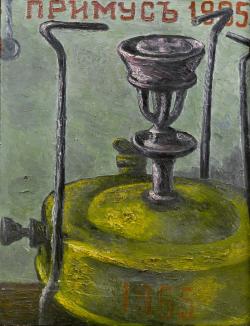 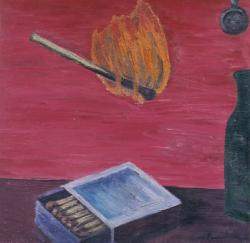 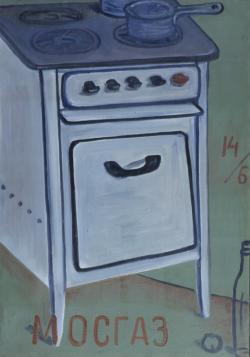 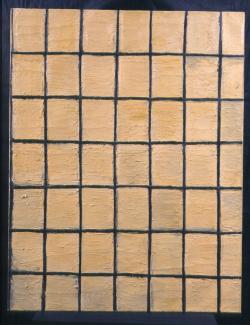 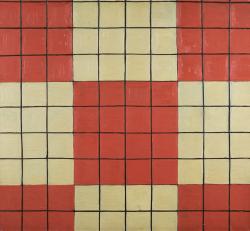 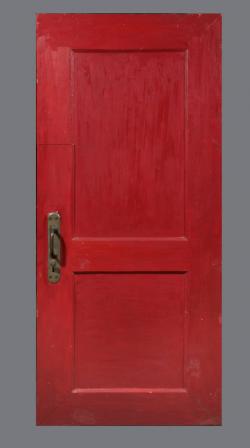 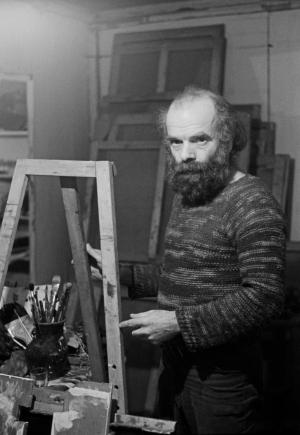 Mikhail Roginsky was an exceptionally prodigious artist, leaving behind a colossal and varied legacy. He is a founder of original version of Russian pop-art. Upon his return to Moscow in 1960 from the provinces, he concentrated on painting. He painted Moscow courtyards and tramways: he painted them the way he saw them, part of the sad and impoverished reality around him, without trying to beautify it but not dramatizing it either. In the mid-1960s he began depicting everyday objects in close up: Gasoline stove (ÔÇÿPrimusÔÇÖ), pot, matches, trousers, the squares of Metlakh tiles used in bathrooms and toilets. Using plywood and actual objects, he modelled fragments of walls in communal flats with doorbells, light switches, and sockets. His ÔÇ£Red DoorÔÇØ (1965) is a milestone work for Russian art. Looking like readymade, but actually constructed by the artist, the door is indistinguishable from an ordinary door in Soviet apartments that was covered in the ordinary red paint used for fire poster stand sand slogans. These works were truly the new word in Russian art, the start of Russian Pop Art. Not much later, Roginsky attracted followers among the Sots Art painters, but the artist seemed not to pay attention to his own discovery and quickly moved on to seeking a new painterly style based on the study of Old Masters and the traditions of the Russian paintings of the 1930s. In the period 1967ÔÇô1978 he painted still lives in the classic style and small landscapes and bathers (1971ÔÇô1977) with acrylics on Masonite. In the early years (1978ÔÇô1980) of his Paris period he produced a large series of ÔÇ£shelves,ÔÇØ modernist tablesÔÇØ and ÔÇ£gridsÔÇØ filled with objects, sometimes abstract, sometimes quite realistic. In 1981ÔÇô1985, Roginsky moved to Parisian landscapes, which were soon replaced by Moscow landscapes done from memory as well as interiors of his Moscow apartment. In 1985, Roginsky returned to Pop Art. He began working with text, creating large canvases with genre scenes painted in oils and with comic book ÔÇ£speech bubblesÔÇØ for the characters, having extremely ordinary conversations; he also created crudely ÔÇ£daubedÔÇØ paintings imbued with Soviet poster style, also on domestic themes. In the late 1980s he returned to his favorite theme of the 1960s: depictions of walls and doors, house wares, and reliefs using corrugated cardboard painted with industrial oil-based paints. He worked in this genre until mid-1994. Roginsky created a series of works on brown paper in 1994, combining captions in Russian with Moscow scenes and landscapes. After which Roginsky once again returned to painting with oils on canvas. Until his death, he painted still lifes, portraits and landscapes; the work of this period is distinguished by exquisitely greyish shades, radiant tones and simple, often grid-like organization of the composition.

Mikhail Roginsky was born 1931, Moscow, died 2004, Paris
He studied at the Perutsky Moscow State Art School, which was shut down for ÔÇ£formalismÔÇØ and turned into the ÔÇ£Memory of 1905ÔÇØ Moscow Art School, from which he graduated in 1951. He traveled around Russia from 1954 to 1960 working as a designer in provincial theatres and returned to Moscow in 1960. He taught at the Moscow City Art School on Kropotkinskaya Street from 1963 to 1969, and then at the Krupskaya Distance Learning PeopleÔÇÖs University of the Arts until 1976. This institution accepted students without entrance exams, so there were naÐùve artists in the student body. It was also the only art school that permitted criminals in prisons and camps to enroll. Roginsky had many interesting students, including the naÐùve artist Pavel Leonov, who later gained fame. In the 1970s, Roginsky together with Orlov and Komar and Melamid organized and participated in a series of apartment exhibitions. He also took part in the exhibit at the Dom Kultury Pavilion at the VDNKh (Economic Achievements Exhibition). In 1978, Roginsky emigrated to France and settled in Paris. The first show in Russia to show a substantial number of his works was in 1993, in the exhibition Roginsky, Turetsky, Chernyshov at the Central House of Artists. Roginsky had a one-man show at the Tretyakov Gallery in 2002.