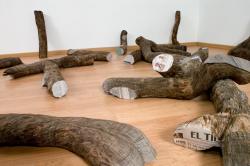 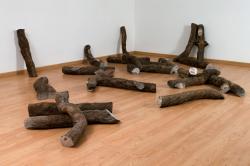 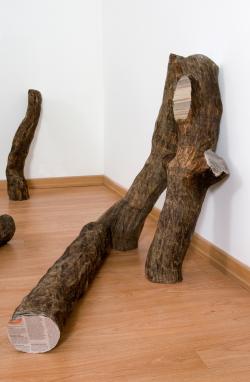 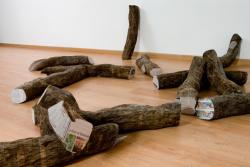 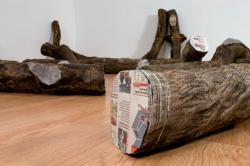 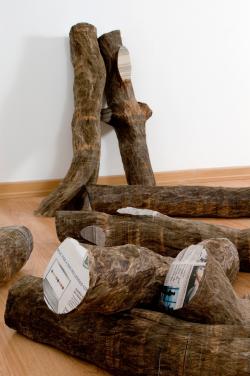 In Miler Lagos’s work, time runs backwards. The title of his work alone - Fragments of Time - suggests an attempt on the artist’s part to slow things down, but the form of the work itself goes further still: these are branch-like forms composed entirely of sheets of newspaper, densely stacked together and sanded at the edges, which generates both a mottled, trunk-like surface and a wood effect colour. Lagos’ work enacts both a fantasy of return (the paper turning back into its natural source material) and a parody of it: these broken branches are, after all, dead, and their listless slumping has something of the exhausted body about it, something worn-out. The density of the work’s structure recalls, in cross-section, the striations of cut wood, and points out the uselessness of the dated news stories contained within - these can’t be read, but they wouldn’t be, anyway.

Where the branches stop, the newspaper - a Colombian daily called El Tiempo, from which the title’s pun springs - is revealed, in thin slices, like a preserved sausage. Fragments of photographs appear, or half-legible headlines. What the thin lines of text most strikingly evoke, though, are the rings within tree trunks - which, of course, point to its age. Time, here, is measured not in organic growth, but in the reception of information. Set against the impassivity and quiet nobility of natural forms, this is a quiet critique of a contemporary world drowning in unprocessed information; little wonder there’s a sadness in these idling forms, scattered in our path.