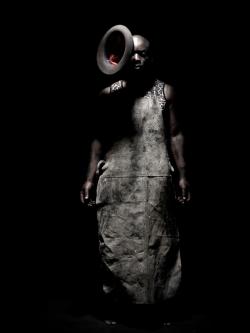 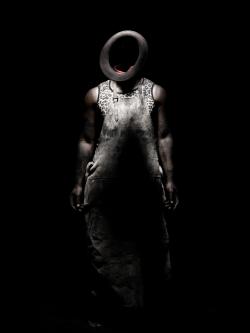 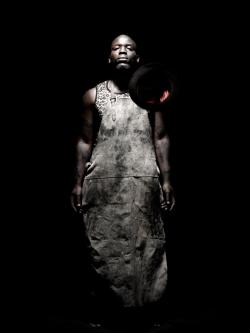 Congratulations on your win. How does it feel, considering you are only the second black African to win in the competitionâ€™s 22-year history?
Winning the competition is great, but being one of only two black South Africans to win it is not. Even though Iâ€™m overjoyed by such an achievement, I worry about what it means for the competition to be in its 22nd instalment under Sasol, and yet only two black artists have been recognised for their work in this regard.

Did you anticipate the win?
I have to admit that I was a bit sceptical about the prospect of me winning the competition. I never even let the thought cross my mind, but when I was informed that my name was among the top seven in a competition that attracted about 600 entries from across the country, I saw how that could be a possibility.

Mohau Modisakeng (Johannesburg, 1986) presents iButho, the first Side Gallery project for 2010. The show builds on a body of work that Modisakeng produced for his final year examination at Michaelis, in November 2009.
In his graduate exhibition, Modisakeng showed Untitled (Okapi), a oversize replica of a knife popular with tradesmen and gangsters, alongside other seemingly disparate objects: wall-mounted wooden megaphones, a large speaker placed on top of a circle of compost, and enlarged snuff boxes, also sculpted out of wood. In addition to two photographs, a sound piece, and a video, it created an elusive narrative, the suggestion of an event, possibly violent in nature, encoded in the works.
There is a quiet theatricality to Modisakeng's installations, which is emphasized in iButho by the use of compost to create a stage for a performance, and for his sculptures. Of this choice of material, he writes:
"History, like compost, is a mass of dead decaying matter, yet it serves the purpose of assisting in the process of growth. Similarly, the history of South Africa is burdened by the idea of death; death in regard to the lives lost in the struggle, or death in regard to the act of forgetting, or rather pretending to forget that part of our history."
Placed on the compost stage, there are twelve objects, unmistakably the shape of megaphones, an instrument used on both sides during protest marches, by protesters and by police and army. They are static objects, made out of wood, and unable to produce sound. The grid-like arrangement suggests the presence of an army, as does the title: iButho is a Zulu word denoting a military regiment.
At the opening, twelve young black men will take up the positions of the megaphones, dressed in identical black shorts, a uniform that is not a uniform. This army, as silent as the megaphones they temporarily replace, at once embody the violence of South Africa's history and, through their youth, suggest potential, and maybe even hope.

In a year in which relentless, violent industrial and public sector strike action has infused the South African public sphere with a restive mood of struggle, the work of young Soweto-born sculptor Mohau Modisakeng resonates with an unnervingly deep tenor.
â€˜A great part of the question that my work attempts to respond to is concerned with the issue of violence and the role it played, and continues to play, in colonial as well as post-colonial African society,â€™ says Modisakeng, whose subtly wrought sculptural pieces grapple with notions of conflict, aggression and the potential for simmering resentments to escalate to physical violence.
In his work, he frequently references instruments and symbols of violence that have become quite specific to the South African political and historical context â€“ taking these objects out of the humdrum realm of news and events, and repositioning them in the hyper-conscious gallery context in a manner that inspires a rethinking of their power to do harm.
â€˜My work investigates the question of how violenceâ€¦ continues to mediate the complex processes involved in defining and refiguring my own cultural, religious, political, [and] social identity as a black South African,â€™ says Modisakeng, whose body of work has been steadily evolving from one enticing iteration to the next, over the course of 2010.
His year kicked off on a strong note with his solo show, entitled iButho (a Zulu word denoting a military regiment), opening in Michael Stevensonâ€™s Side Gallery in January. It was as part of this show that Modisakeng first showed Untitled (Okapi), an outsize replica of a flick knife popular with tradesmen and gangsters. The enlarged scale of the blade conceptually expands the lethal potential of the weapon to cut and damage, while the smooth curves of the carved wooden handle draw the viewer in on a more sensual level.
The Michael Stevenson show was also the first time audiences got to see the performance piece, iButho, in which twelve young black men, dressed in identical black shorts, stood still and silent in a regimented grid-like formation, like some oddly inert army. This piece strongly recalled Drum magazine photographer Bob Gosaniâ€™s images of the degrading â€˜tauzaâ€™ dance which naked prisoners were forced to perform in the courtyard of the notorious Old Fort prison in Hillbrow.
The sense of theatrical poise in Modisakengâ€™s pieces imparts a creeping sense that the situation might, at any given moment, take a turn for the worse. In the paradox between the smooth sensuality of their surfaces and the eerily unsettling power of their conceptual freight, his sculptures recall the mood of menace in work of Jane Alexander, who has been a supervisor and mentor to Modisakeng since he began his studies at Michaelis, where he is currently completing a Master of Fine Arts degree.
The iButho show also featured a series of carved wooden megaphones, an instrument associated with riots and crowd control at out-of-control moments of public demonstration. But again, the megaphones are static and unable to produce a sound â€“ rendered oddly inert, conjuring a politically charged spectre of violence rather than the visceral bloodiness of violence itself.
Modisakengâ€™s name next emerged on the circuit as part of the Spier Contemporary 2010 exhibition with his video installation, Sedikwa ke Ntswaâ€™pedi, winning him an artist-in-residency grant at the Gyeonggi Creation Centre in South Korea.
In June and July his work was exhibited at Brodie/Stevenson in Johannesburg as part of the This is Our Time show, alongside work by Pieter Hugo, Glenn Ligon, Michael MacGarry and Jo Ractliffe. And the following month he was announced as one of the finalists in the career-making MTN New Contemporaries Award show. Assembled by guest curator Nontobeko Ntombela, it was a strikingly well conceptualised exhibition with currents of social unease around South Africaâ€™s fraught politics of labour running back and forth between the sculptural installations of Modisakeng and Stuart Bird, electrifying the ground floor space of the KZNSA gallery.
Both his Inkohliso series and his Qhatha triptych of self-portraits made Modisakeng a formidable contender for the prize, which went to Kemang wa Lehulere. In the photographic triptych he enacts a game he recalls from playground scraps as a child growing up in Soweto, where a dual or will to fight would be declared by clapping together fistfuls of red earth. Yet the figure in the images is not a boy, but a grown man wearing a leopard-print vest and industrial apron to denote his working class identity. The intent of the depicted persona to take the fight to the next level could be read as a metaphor for the spirit of discontent underlying the recent violent industrial action. These images are a stark reminder that working class disgruntlement with the continuing inequity of the post-apartheid regime is to be ignored at our peril.
But perhaps his most conceptually acute work on the MTN show was his Inkohliso series of black disks of painted wood. On a recent visit to his childhood home in Soweto, Modisakeng came upon a badge heralding the ANC kept by his mother as a memento of the countryâ€™s first democratic election in 1994.
The sculptures inspired by the badge are theatrically large-scale versions of the original object. But, in a gesture of arch subversiveness, these monumental objects have been inverted, so instead of seeing the upbeat propaganda on the front of the badge, we are faced with huge circular plains of blackness, interrupted only by the cool metal of the sharpened pins with their potential to pierce. An embodiment of the flipside of everything that was supposed to go right in this country, these disks are like anti-monuments heralding the inescapable political failures of the present moment. Simple, yet imposing in form they leave a darkly inescapable impression on the perceiving mind.