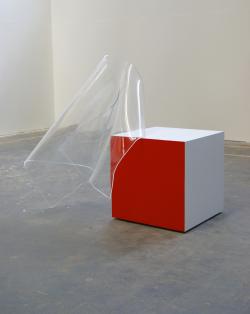 150 x 130 x 100 cm
The title of Natasha PeelŌĆÖs sculpture - The WorldŌĆÖs Local Nomad ŌĆō introduces the sense of internal contradiction at the heart of the artistŌĆÖs practice. A local nomad might be an accurate description of the paradoxical identity of the contemporary western individual: technology appears to have blurred national boundaries, making nomads of us all; and yet the baggage of national identity ŌĆō of the local ŌĆō seems impossible to fully shake. PeelŌĆÖs work plays out a formal contradiction too. A square plinth, the traditional sculptural support, rests on the gallery floor; a sheet of transparent, folded Perspex, unconstrained by the plinthŌĆÖs structure, cascades and dances off to the side, one corner touching the floor, like a toe. Peel uses industrial ovens to heat sheets of Perspex until they become malleable, bending them in a way that retains a sense of the bodyŌĆÖs traces. The plinth, meanwhile, is coated in coloured vinyl, its flattened aesthetic recalling not only the early twentieth century abstraction of Russian artists like Malevich and Rodchenko (Peel is herself Russian and lives and works in the UK), but also their appropriation in contemporary branding, in what Peel calls ŌĆ£the institutional fate of the avant-garde.ŌĆØ Peel is particularly interested in the writings of Polish sociologist Zygmunt Bauman, whose definition of ŌĆśliquid modernityŌĆÖ ŌĆō the fluid and amorphous condition of contemporary society, as opposed to the old certainties of the past ŌĆō might be embodied in that wave of Perspex, shimmering and disappearing in the light.

A DARWEN art student’s sculptures created with the help of a Blackburn firm have been featured in a display at the Saatchi Gallery in London.
Natasha Peel, 21, is one of 20 artists featuring in the New Sensations exhibition for young artists in October, having beaten competition from more than 800 entries.
The Blackburn College graduate, who studied fine art at Oxford University, created a series of plastic sculptures aimed at subverting the branding of major institutions, such as Goldman Sachs and HSBC.
The sculptures were created using equipment from Blackburn-based Silicone Engineering Ltd, who sponsored Natasha’s work.
She said: “The show is part of the Freeze exhibition, and they have have big shows like this in a lot of countries.

I grew up in Russia until the age of nine until moving to the North of England. I utilize industrial resources that I have access to at home in my practice. I have an obsession with elasticity and malleability of material, especially heat-treated perspex. In my work I attempt to twist the language of corporate brands, who themselves appropriate the historical avant-garde (i.e. constructivism and suprematism) – a similar formalist utopianism now serving neoliberal capitalism.