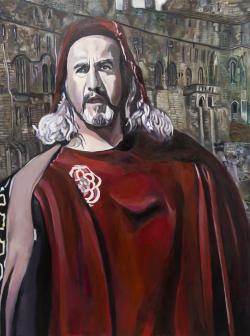 Nathan Cash Davidson
Aphorism By The King To Destroy Forever 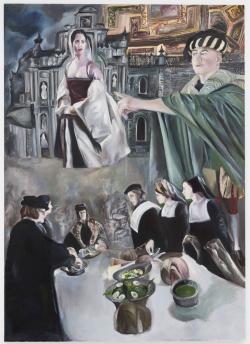 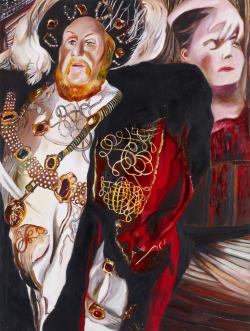 Henry VIII strides out of the painting, his unwieldy gold chain glittering, his eyes staring glassily ahead, a severed female head held aloft behind him, and seems to intone the title of the painting itself - So It Is Decreed And So It Shall Be Done. If the title seems a bit too extravagantly theatrical to be genuine Tudor, it’s because it is: Henry’s dead eyes and tumbling jowls are those of his Madame Tussauds mannequin, painted by Nathan Cash Davidson in a style of semi-detached sarcasm. In Davidson’s paintings, historical and imagined narratives are told as though half-heard, half-understood, but the space in his works is conversely overstuffed, both gesturally and pictorially, like the dummy Henry with his enormous shoulders. 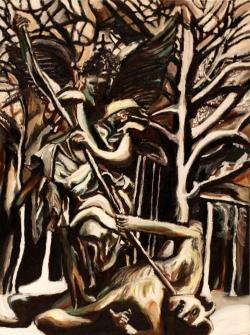 There’s a joyous abundance in Davidson’s paintings, a delight in the historical anachronism of the act of painting. In Angelic Fever, St Michael slams the Devil in the neck with a bendy pole, while a thicket of branches in the background (culled from an image found online of a snow-capped wood) struggles for pictorial supremacy. Disregarding pictorial niceties (anatomical accuracy, compositional logic, tonal consistency) means Davidson’s painting is invested with the immediacy of a story told by an excited child: words tumble out, in whatever order they happen to appear. 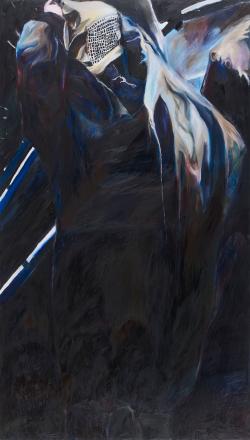 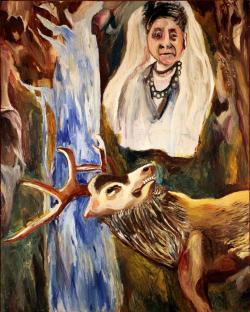 Nathan Cash Davidson
Nobody Can Stop The Wooden Top Boy

And in Nobody Can Stop The Wooden Top Boy, a scene from a surreal fairy tale written by the artist, a stag half-grimaces, half-grins at a stern older woman appearing by a waterfall: that sheepish, secretly delighted smile epitomises the gleeful picaresque of Davidson’s painted world. 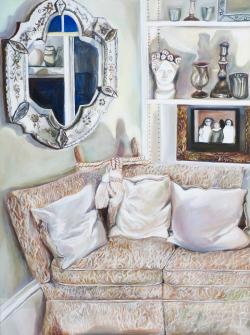 NATHAN CASH DAVIDSON
The youngest painter ever to have a solo show at The Parasol Unit proves his humour is a surreal as his art, January 2011

At a mere 22-years-old Londoner Nathan Cash Davidson is the youngest painter to ever show his work at Parasol Unit. Heavily influenced by historical figures and 16th Century costume, his work evokes a surreal regal renaissance as he depicts period characters with a beguiling sense of humour. Burlesque In Which Weâ€™ve Thrown It On Its Head, which takes itâ€™s name from cuttings of random newspaper stories put together haphazardly, is a collection of paintings that explore Davidsonâ€™s fascination with old master painters as well as being symptomatic of his own surreal imagination and oddball sense of humour.

Dazed Digital: What is the significance of the exhibition's title?
Nathan Cash Davidson: The title of the show comes from chopping up words and putting them together again, although It wasnâ€™t completely random. I do it for fun. I just collected newspaper articles and chopped them up and rearranged them. I always end up using them for titles and lyrics and stuff as well. They can vary from The Metro to The Evening Standard, or just stuff my mum and dad have.

DD: Why do you choose to depict historical figures, both real and mythical?
Nathan Cash Davidson: I just like anyone who looks like they could be from the past. For example, if I saw a film where everyone was dressed up like they were from the 16th century, I could pause that and use that. Our faces havenâ€™t really changed much, so anyone could potentially look identical to someone from that time if they dress up in the same clothes.

DD: What is it about this particular time period that fascinates you?
Nathan Cash Davidson: When I was a kid my parents used to take me to the National Gallery, and lots of houses that had old master paintings in them. When I paint, it reminds me of going on holiday and walking round the old houses. It also reminds me of going to see pantomimes. Often, Renaissance paintings capture us much better than painters do nowadays. I can relate those works to stuff I do now, like going to the synagogue or going to my friendâ€™s house who has a big garden â€“ at night we used to go out on the shed and pretend there would be like werewolves and zombies on the other side!