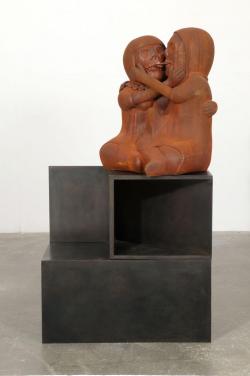 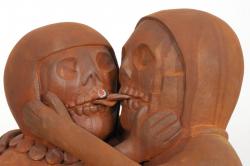 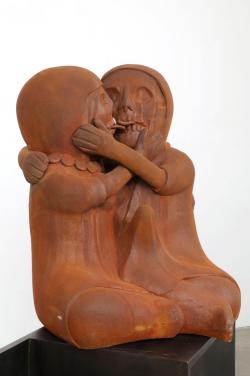 Through their ethnological pastiche, Nathan Mabry’s work combines references to art history, South American artefacts, and popular culture, to create provocative monuments entwining high culture, primitive ritual, and contemporary experience. In A Very Touching Moment (Pitching A Tent), Mabry’s figure – inspired by Pre-Columbian Moche sculpture, and suggestive of Rodin’s The Kiss – sits as a grotesque fertility totem atop a plinth reminiscent of the work of John McCracken or Donald Judd. Through juxtaposing these disparate forms, Mabry points to a totemic ascendancy, tracing a narrative lineage between ancient liturgy and modern day systems of museological value. 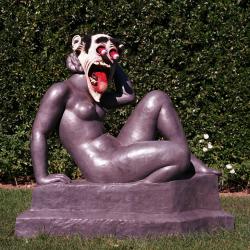 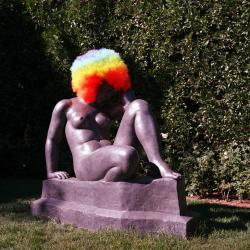 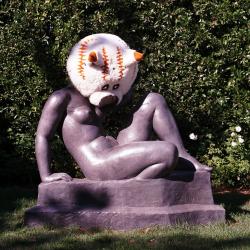 Nathan Mabry’s In Your Face series takes as its subject Aristide Mailol’s 1937 sculpture La Montagne. Photographed at The Sculpture Center in Cleveland, Ohio, this famous work is emblematic of the ideological coalescence between art, artifice, and nature. Shrouding the figure with a variety of novelty masks, Mabry appropriates the monument as a plinth for his own intervention. Literally using art history as a base for slap-stick humour, Mabry levels cultural hierarchy, disguising modern masterpiece as clownish impostor. 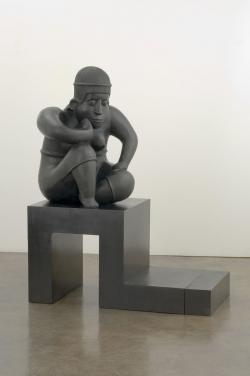 Like a DJ sampling music to define his own sound, Nathan Mabry openly borrows references from both modern and antiquated cultures to contrive sculptures that transcend time and place; falsifying a ‘super history’ tracing art evolution from its primal beginning to its portentous future. Mabry’s A Very Touching Moment (?) operates as a ‘cover version’ of Rodin, the tribal figure seated in the famous pose of contemplation. Both atavistic and cartoon-like, the totem is strangely retro-futuristic; an idea reflected in its plinth, which is a replica of Tony Smith’s Playground (1962).

In a series of photographs in Nathan Mabry's debut solo show at Cherry and Martin, several figurative sculptures are shown wearing grotesque masks.

A Zuniga mother with child balanced on her hip sports a Halloween headdress of horns, furry golden hair and a mouth like a vertical gash. The incongruity jars for a moment, but the moment passes and the work ends up feeling more like a prank than a deliberately layered dialogue.

Mabry is a clever and agile trickster. He's prone to facile gestures such as the photographs but is equally capable of teasing out more subtle frictions. In his wonderfully dissonant "Peace Pipes," Mabry translates generic fluorescent light bulbs (the favored material of Minimalist sculptor Dan Flavin) into textured bronze, attaches feathers and beads la Native American ceremonial objects, and garnishes the whole with glitzy rhinestone dog tags and a roach clip.

A 2004 master of fine arts from UCLA, Mabry is well-schooled in irreverence, and well-schooled in general about art's multifarious functions as consumer object, cultural artifact, fetish. He takes appropriation art several steps further than its first-generation practitioners, borrowing from the store of art in the Modernist canon and art of indigenous cultures and melding them with humor and smart craftsmanship.


Knight, Christopher. "Come and Gather Around the Llama For an Intimate Chat," Los Angeles Times, November 25, 2005.

"The conversation in "Conversation Piece (Jackin', Stackin' and Crackin')," a remarkable new sculpture by Nathan Mabry in the rear gallery at cherrydelosreyes, is lively and sly. It takes place among signifiers of three kinds of art from indigenous folk culture, youth pop culture and mainstream high culture.

The chattering among the classes is productive.

On the high side is the buffed black lacquered base, whose cubic form built from three interlocking units derives from the Minimalist sculpture of John McCracken. Among other things, Minimalist sculpture was revolutionary because it took art off its elevated pedestal and put it on the floor, where it occupied the same plane of mundane existence as a viewer.

Mabry's rectilinear, mirror-finished slab does too; but what was radical when it was new in the 1960s is thoroughly conventional today. So Mabry gives his block double duty: He turns it into a pedestal.

Stackin' on the McCracken is a big terra cotta vessel, formed in the shape of a llama's head. Crafted as exquisitely as the pedestal, the vessel features a streaked russet patina, which yields the appearance of brute Cor-Ten steel.

Llamas are gentle beasts of burden first domesticated by the ancient Incas; here Mabry puts the animal atop a carefully sculpted base the way Brancusi did with fish, birds and Mlle. Pogany.

Like them, the head is sleek, stylized and pared down essence of llama. As a vessel, however, it's also clearly empty. With wit, any presumption of essential purity claimed for folk cultures is undercut. Mabry's llama grins.
To finish the jackin', which is street slang for theft, that wide grin is capped with a row of seven gold-plated teeth. The gangsta look is finished off with sparkling embedded rhinestones, spelling out the word "peace."

Mabry does considerable violence to the gated communities where folk, pop and high culture typically lead isolated lives. But the reconciliation and repose he achieves among them transforms the sculpture into a vivacious conversation about peace.

Mabry was among several standouts in "Thing: New Sculpture in Los Angeles," the important group exhibition of young and emerging artists at the UCLA Hammer Museum last winter, and his work has turned up in two group shows in area galleries since then.

In February he will have his first full-scale solo exhibition at this space (which is about to be renamed Cherry and Martin Gallery). "Conversation Piece (Jackin', Stackin' and Crackin')" suggests it's a show to look forward to.