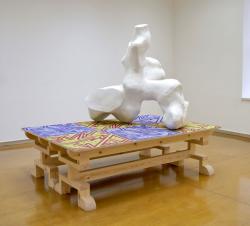 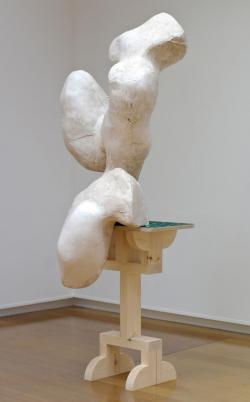 Nick Evans makes sculptures that are fleshly and inert, corporeal and otherworldly, contradictory constructions. Work such as the 'Anti Autonome' series (2010) are simultaneously abstract and figurative, although it is hard to identify what particular elements resemble: from certain perspectives, they might look like parts of human or animal bodies, tree trunks or found objects.
His work oscillates between the realms of abstraction and figuration, anthropomorphism and zoomorphism, and attends to the larger questions of the language of sculpture: about the relationships between form and material, sculpture and plinth, mass and gravity, relationships that concerned Giacometti, Arp, Moore and other Modernist artists, as well as later artists such as Nauman, Hesse and Deacon. Yet Evans maps out his own territory, bringing together translations of historic aesthetic moments with new and unexpected material forms to make work that is unnervingly dynamic and visceral.
Over the past decade Evans has been exploring the limits of what sculpture can be and what it can do. His method has involved exploiting and undermining conventional approaches to traditional materials such as plaster, bronze, wood, aluminium, terracotta and ceramic, and questioning their historic and conventional aesthetic properties and purposes. He does the same thing with newer materials such as polyester resin and fibreglass, silicone rubber and polyurethane foam.
Concerns about the history and language of sculptural materials have always been present in his work, as in the ceramic vessel/column forms of the 'Violent Femme' series (2008).
The surface can betray the process of its making, as with 'The Numbers' (2008), bone china vessels that retain irregular mould seams.
He places some works in unbelievably precarious positions, as in 'Figures Fallen' (2008).
In works such as the 'Untitled' series (2009), pairs of lumpy, lumbering bronze legs advance along wooden wall mounted plinths; one work‚Äôs plinth even sprouts what could be peg legs.
Most recently, the 'Anti Autonome' series brings together organic plaster forms with tables synthesising Modernist Primitivist surface patterns and bodily forms, along with the colours and patterns of Kente cloth from Ghana and Ivory Coast, and Memphis-inspired 1980s designs. Evans makes the plaster forms by modelling sections out of clay which he then casts into plaster components.
He exploits plaster's capacity for being modelled and built up by joining the components into larger forms which consist of two or more plaster casts of the original clay sections. The aim of traditional casting is to replicate the original model in the final material. In Evans‚Äôs 'Anti Autonomes', the finished work is dictated as much by the inherent qualities and creative possibilities which arise from the ‚Äòfinal‚Äô material (plaster) as those which arise from the ‚Äòoriginal‚Äô material (clay).
Evans‚Äôs work has been described in terms of hybridity and virility; corporeality and sexual energy certainly dominate the work.No doubt it also elicits other primal responses. Perhaps his work taps into those early stages of childhood development, when we discover what makes an object a different thing to us, strange or amusing.
The psychotherapist D.W. Winnicott theorised how children, in the process of developing the ability to recognise the thing that is ‚Äònot-me‚Äô, learn to relate to objects.4 He proposed that we learn to ‚Äòdestroy‚Äô objects in our minds so that we might recover them and ‚Äòuse‚Äô them for play. Not only does Evans deconstruct the conventions of sculpture, but he enables its conceptual dismantling, in a sense, its liberation from the constraints of sculpture, as well as its recovery and persistence.

Fresh from his solo show at Tate St Ives, Nick Evans returns to Glasgow to exhibit new work - his first exhibition in his representative gallery‚Äôs new Dixon Street space. Evans‚Äô practice has developed a great deal since his early exhibitions in Glasgow in 2002. His solo show at Tate St Ives, the result of a sustained period of work as the gallery‚Äôs fourth artist in residence, confirmed his preoccupation with art history, sculpture‚Äôs cultural legacy and its links to popular culture.
Working with steel, fibreglass, aluminium and ceramics, Evans‚Äô work in part explores the abstraction of figurative forms and their resolution in anthropomorphic states, a method most common in postwar avant-garde sculpture. His work simultaneously references the future and the past. ‚ÄòMemorials to the Closed System Schematic‚Äô, exhibited at Tate St Ives echoes Bernar Venet‚Äôs work, while embracing pop culture references that play a great roll in stressing the work‚Äôs relevance in relation to the survival of contemporary sculpture.
Historically, St Ives‚Äô has a strong association with British sculpture - Barbara Hepworth and Roger Hilton are synonymous with the region. Working in the shadows of these artists has definitely enriched Evans‚Äô practice and given him the opportunity and confidence to embrace new techniques and approaches. With these experiences in mind there is no doubt that this exhibition will include some of his most interesting work to date.