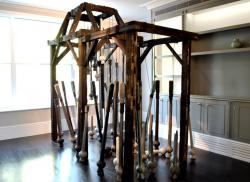 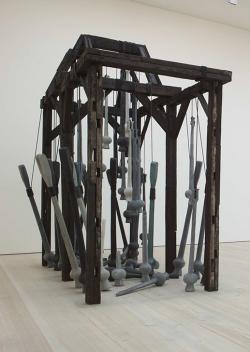 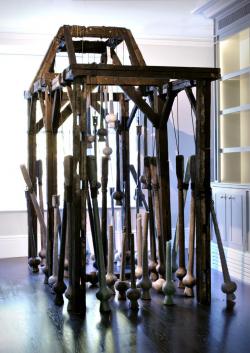 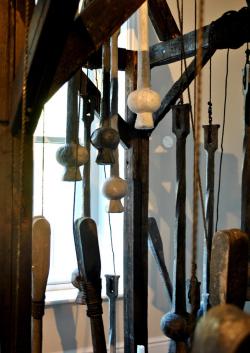 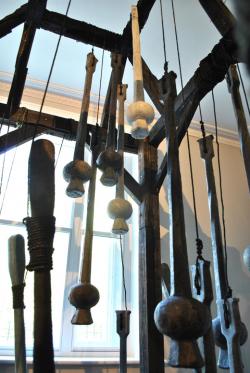 Nika Neelova makes sculptural installations out of reclaimed architectural features and burnt timber. Disassociated from their original use and re-composed in her new arrangements, these old beams, casts and worn ropes exude their own original energy as well as their heritage. They have become something other than what they were, while retaining a feeling of oneiric repetition – claiming a life of their own and a new purpose, but still clawing onto a past one.

Principles of Surrender is constructed out of six burnt wood posts which, with its slight cantilevers, support beams and mortise and tenon joints, resembles age-old vernacular architecture. Tied to the platform created by these posts are huge bell clappers which the artist has cast in wax infused with ash, creating an enormous congregation of bell pulls. 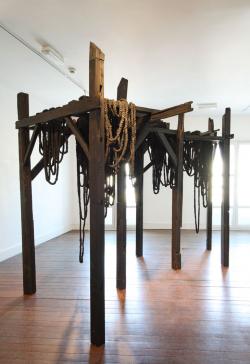 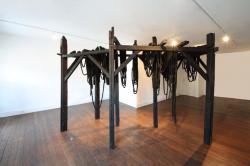 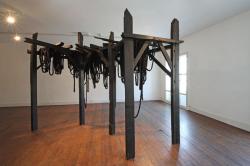 But there is no bell to ring, because this structure is not a bell tower. Yet both of these images, and what they can connote, hover around as poetic associations within the same space. Similarly, Scaffolds Today, Monuments Tomorrow distressingly reads both like a seaside pier and a platform used to hang people.

Neelova’s works stand as odd, transparent altars to their elements’ origins, made up of elements that have survived despite being charred. They open up the distorted manner in which the past is read by the present, and what she refers to as “the historical memory that is embedded in materials.”

Elsewhere in the East Wing, Nika Neelovaâ€™s Partings dominates a room. A huge installation, it is made of concrete casts of one of Somerset Houseâ€™s six-panel Georgian doors.
â€śThey loaned it to me for a week,â€ť the artist tells me. â€śFor me, it was always important for the work to be site-specific. While Somerset House is palatial, itâ€™s about contrast â€“ here are doors taken out of their doorframes, itâ€™s about dispossession and isolation.â€ť
Crisis is the first charity Neelova has worked with, an opportunity she calls an honour as well as an inspiration.
â€śI really admire what they do â€“ at the start of the project I went and met the clients, and see what they do. They help people back to life through art, itâ€™s inspiring.â€ť

When did you first realise you wanted to be an artist?
I think the idea was in my mind for as long as I can remember, but the full realisation of it only came in my first days as an art student at the Royal Art Academy in the The Hague. Until then, I was only flirting with the various manifestations of art, but there it became immediately obvious to me, and it was also immediately obvious that it was going to be sculpture.
If you had to name a few artists who are a constant source of inspiration, who would these be?
For me it is very difficult to name just a few artists. But certainly to begin with, I would say Miroslaw Balka, Gabriel Orozco, Felix Gonzalez-Torres, Mona Hatoum.
How does it feel at your age to take part to an exhibition with the likes of Tracey Emin, Sir Anthony Caro and Gillian Wearing? Although youâ€™ve already taken part to many shows, I assume it must be pretty exciting.
Unbelievable. Incredible. Incredibly exciting. It is a great honour for me to take part in the exhibition, featuring the works of Sir Anthony Caro, Tracey Emin, Gillian Wearing, Yinka Shonibare, Anthony Gormley. I really admire these artists and their work has had a huge influence on me since the very beginning, when I first discovered contemporary art for myself and came to love it. I read books about them, quoted their texts in my dissertations and, surely, went to see all their exhibitions. I never thought I will have the opportunity to meet them one day, let alone take part in the same project. It was also a great opportunity to learn from them, seeing how they have approached and dealt with the theme of the show.