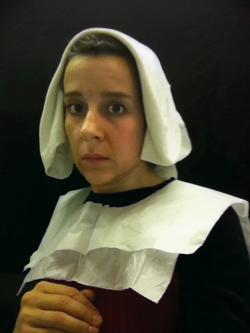 Nina Katchadourian’s ongoing Seat Assignment project makes use of the most basic of materials – a camera phone, scarves, tissues – anything, in fact, readily available on board a plane during a longhaul flight. Locking herself in the toilet, Katchadourian then takes self-portrait photos on her phone (the sort of things that pepper a Facebook profile page) in the style of fifteenth century Flemish portraiture, of the kind exemplified by painters like Hugo van der Goes or Jan Van Eyck. An inflatable neck cushion, a vest draped over it, becomes a makeshift headdress; a paper toilet seat cover stands for a plain white collar. A scarf or jacket hung in the background recreates the inky depths of a painted setting. 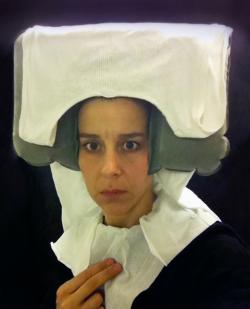 The artist then recreates the solemn expressions of the Flemish sitters – their expressions designed to convey humility, or devotion – and their delicate gestures: hands held with symbolic exactitude. The DIY and speedy nature of the making of the images is at deliberate and comic odds with the meticulous naturalism and time-consuming construction of the Flemish paintings, and the stone-faced piety of the source images is wittily undercut by the use of materials associated with bodily functions. Katchadourian’s images go further than mere one-liners, though. By drawing parallels between two divergent attitudes to the power of the portrait – the Old Master belief in its ability to generate an eternal memory, versus the contemporary ubiquity and banality of the selfshot portrait – Katchadourian’s works address the notion of time in the images we make of ourselves. The faith (that the image will survive us) is the same; nothing, in the end, has really changed.

Artist Nina Katchadourian has a creative way of passing the time on a long-haul flights: She recreates famous Flemish paintings. In a series she has dubbed "Lavatory Self-Portraits in the Flemish Style,ā Katchadourian poses gracefully, like the member of a very exclusive, very old mile-high club who just happens to be hanging out in a tiny bathroom.
Katchadourian told The Huffington Post by email that the images are part of her larger, 2-year "Seat Assignment" project, which "involves making art while I'm in flight using only my cellphone and what I find around me."
It's an odd way to travel, certainly, but an inventive way to create art.

Faced with a long flight, many people take a Valium and doze. Nina Katchadourian, flying from her native California to take up a residency at Dunedin Public Art Gallery in New Zealand, retired to the lavatory equipped only with her phone camera and objects found on the plane, along with a black scarf, which she draped on the wall opposite the mirror. Then she created a series of Flemish portraits. "What is art?" asks one of her constructed sentences in the Sorted images of book spines. "Close observation," is the reply. She is funny, provocative, and often unsettling. A vitrine containing a stuffed pet dog resting on a plump cushion was rejected by San Diego's museum of natural history. An outdoor installation involved playing recordings of UN interpreters mimicking bird calls through speakers hidden in trees, while another, Mended Spiderwebs, is a series of images of webs painstakingly repaired with red thread. It's a whole new way of seeing.

Nina Katchadourian is an American artist working across many media- photography, sculpture, video and sound- and many themes, including maps, language and translation, and nature.
Her work includes the ongoing Sorted Books project, in which she resequences the spines of book covers in libraries and other collections so their titles combine to create a new idea or meaning; Talking Popcorn, a sound sculpture that translates the popping sounds of popcorn into morse code: Natural Car Alarms, where alarm sounds are replaced by the sounds of bird calls; and Hand-held Subway, for which she dissected a map of the New York subway system, cutting out the individual routes and then scrunching them together like unapooled cassette tape. The Listener spoke to Katchadourian a month into her six-week residency at Dunedin Public Art Gallery and a fortnight before the opening of her exhibition there, named after and drawing on another one of her ongoing projects, Seat Assignment, which is comprised of work made during air travel.


NOW PLAYING AT BROWN: ADVICE FROM A FORMER STUDENT
November 2010, by Elizabeth Rau, The Providence Phoenix

Donāt put sharp knives in the dishwasher. If youāre in a lousy marriage, get out. Pack light.
Wise words from a doting aunt? Guess again.
Those recorded messages and mote are streaming from speakers in a wall at Brown Universityās Faunce House as part of a public art project created by a former student who believes everyone could use a bit of friendly advice now and then.
āI think of it, in some ways, as a little oracle in the wall that, over your years there, you can get to knowā says Nina Katchadorian, a nationally recognised conceptual and multimedia artist who graduated from Brown in 1989. āMaybe itās a helpful place to visitā.

The artistās recently installed āOffice Semaphoreā in lower Manhattan is a zesty homage to the maritime flag signalling systems used by ships to convey messages to one another. The work, an interactive Public Art Fund project, consists of an old-fashioned tourist telescope, above, at the corner of a plaza in the middle of the financial district, its lend trained on the window of an upper floor office in a nearby skyscraper. Each day the man working in the office, or his assistant, arranges objects on his window sill. The combinations and order of objects on his window sill. The combinations and order of objects- mostly office supplies and personal items and effects- convey a message, like a semaphore, which viewers down on the plaza can interpret using a key-chart on the telescope. Changed a few times a day, sometimes more frequently, the arrangements indicate the subjectās mood, productivity and overall workplace conditions.


NINA KATCHADOURIANāS GENEALOGY OF THE SUPERMARKET
2008, by Cory Bernat, Gastronomica

I like to think of Nina Katchadourian as a conscientious grocery shopper with an odd agenda. I picture her in the supermarket, carefully scrutinizing all the brightly coloured packages before placing anything in her cart. But unlike her well- informed counterpart in the next isle, who anxiously calculates the nutritional content, serving sizes, and food miles for each product, Katchadourian never even turns over the packages. Instead, she greets the products head on, just as they are displayed, and then checks out what the productās icon is wearing.

San Diego- over the last decade, Nina Katchadourian had mended broken spider webs with coloured thread and glue. She has programmed a computer to translate the pulses of a popcorn popper into morse code. She has diagrammed a family tree of supermarket icons- Uncle Ben, Mr. Clean, the Gerber baby- and staged an endurance test for herself, attempting to smile for as long as possible while archival footage of explorer Ernest Shackleton was projected onto her front tooth.