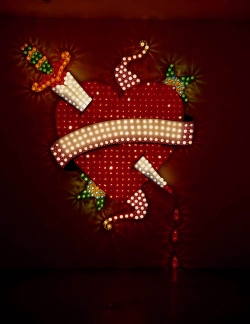 Toxic Schizophrenia is a classic badass tattoo, constructed from 516 little light bulbs. Blaring violently bright and self-indulgent, Tim Noble and Sue Webster take pop art to the extreme, blowing it up in lights like fly-by-night casino chintz. The artist design and make these light paintings themselves, creating a DIY glam that's better than the real thing. 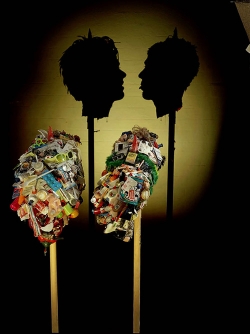 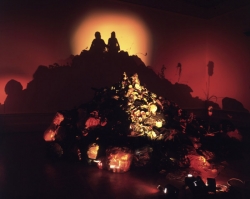 3 COINS MIGHT SHORT OUT THIS FOUNTAIN
February 21, 2008, by Carol Vogel, The New York Times

As a massive crane stacked units of curved steel embedded with thousands of light bulbs on a vast circular base on Sunday, passers-by couldnГўв‚¬в„ўt help but wonder what was rising on the exact spot where the fabled tree stands every Christmas in Rockefeller Center.
Гўв‚¬Е“I thought it was the ball they drop in Times Square,Гўв‚¬Вќ said Arthur Aery, an accountant from Guildford, Conn. Others thought the crew was assembling some kind of carnival ride.
Chilly though the day was, crowds gathered steadily around the site. In the middle of it all was a slight dark-haired couple, clad in blue jeans, sneakers and wool caps. Each chatted amiably with onlookers, explaining in broad English accents that this was the makings of a 61,000-pound fountain fashioned from steel, neon tubing and 3,390 LED bulbs. When the installation is completed for its official opening next Wednesday, it will soar 35 feet in the air.
The two, the London artists Tim Noble, 42, and Sue Webster, 40, seemed even more excited than the crowd as they watched two years of work and a decade-long dream finally take shape. Гўв‚¬Е“The piece is really about danger,Гўв‚¬Вќ Ms. Webster warned impishly. Гўв‚¬Е“Everyone knows you shouldnГўв‚¬в„ўt mix electricity with water.Гўв‚¬Вќ
Yet the water will be only a simulation. Turned on each day from 6 a.m. to midnight through April 4, the fountainГўв‚¬в„ўs blue neon tubing and LED lights will create the illusion of cascading water.
Sunday was Day 3 of a weeklong installation involving a team of experts from Aachen, Germany, who have spent over a year fabricating Гўв‚¬Е“Electric FountainГўв‚¬Вќ from a rough sketch provided by Mr. Noble and Ms. Webster. Overseeing the team were Yvonne Force Villareal and Doreen Remen, who run the Art Production Fund, a nonprofit organization that presents public art around the city. Also on hand were two members of a production team from Tishman Speyer Properties, an owner of Rockefeller Center.
Гўв‚¬Е“ItГўв‚¬в„ўs starting to look like something youГўв‚¬в„ўd see outside the Bellagio Hotel in Las Vegas,Гўв‚¬Вќ Ms. Webster said as the fabricators put the pieces into place.
Ms. Webster and Mr. Noble, who have lived and worked together since they were art students in the late 1980s, delight in such kitsch. Over the years they have gained an international following for creating illuminated signs in shapes like hearts and dollar signs or with words like Гўв‚¬Е“ForeverГўв‚¬Вќ and Гўв‚¬Е“Yes.Гўв‚¬Вќ They are also known for creating assemblages and kinetic sculptural installations from found objects, often projecting silhouettes of themselves on a nearby wall. (Гўв‚¬Е“Polymorphous Preverse,Гўв‚¬Вќ a kinetic sculptural installation that was shown last fall at the Freud Museum in London, will go on view on Feb. 29 at Deitch Projects in SoHo.)
The couple produce much of their work in their studio, on the first floor of a converted warehouse in the East End of London, where they also live. The building resembles a bunker, with rough cement cladding and mirrored windows, the creation of a friend, the London architect David Adjaye, who renovated the structure for them.
Relaxing two weeks ago in their London living room, an airy space with a coffee table by their neighbor Rachel Whiteread, a carpet by Gary Hume and a white ceramic flowerless puppy by Jeff Koons atop the dining room table, the couple talked about the evolution of Гўв‚¬Е“Electric FountainГўв‚¬Вќ from a drawing on a scrap of paper to a $1 million project that is likely to be seen by some 250,000 people a day.
Гўв‚¬Е“ItГўв‚¬в„ўs been a whole learning process,Гўв‚¬Вќ Mr. Noble said.
Three years ago the couple mentioned to Mark Fletcher, an art adviser who has long championed their work and is a board member of the Art Production Fund, that they wanted to do a project at Rockefeller Center. What they first had in mind was a giant three-dimensional version of Гўв‚¬Е“Toxic Schizophrenia,Гўв‚¬Вќ a 1997 work of theirs consisting of a giant red illuminated heart dripping blood, with a jeweled dagger plunged into its center.
Rockefeller Center rejected the proposal. Гўв‚¬Е“New York wasnГўв‚¬в„ўt ready for blood after 9/11,Гўв‚¬Вќ Ms. Webster explained. Гўв‚¬Е“We were really disappointed.

Sue Webster's captivating shadowplay. Backlit with a simple yellow bulb, a tottering heap of rubbish casts its silhouette against the wall: two figures sit peacefully on a summit, a breeze stirring the grass at sunset. The grass is a tangled skein of cassette tape, the breeze created by the movement of visitors through the gallery. I'd guess that this will be many people's favourite piece and not just because it's beautiful - which it is - or because it reveals its own low-tech artistry. That part is simple: junk into gold. But the silhouette allows your mind to roam - summers past, high vistas, maybe Beckett's Happy Days with its sunset at the end of the world.

If the seasonal pull exerted by thousands of teeming lights seduces holidaymakers and tourists to flutter like moths up and down the salacious promenades of Blackpool, or to cruise the super-myriad light-shows that illuminate downtown Las Vegas, then, one might argue, these melodramatic and gauche displays of raw metaphysics are proof that the aesthetic sublime still holds us captive.
Plato argued that it is not only the task of artists to transcend the gloomy world of mere appearances, it is up to them to pierce our grim reality with sparks of metaphysical essence that transcend the mire of terrestrial life.
So what better role model than effervescent Southend-on-Sea, contend Tim Noble and Sue Webster, where the neon refractions and autistic animations of tinsel-town Arcadia represent a fully computerised electronic sublime - readymade, plugged-in and lit up, twinkling and blinking in sequential pulses that couldnГўв‚¬в„ўt fail to make PlatoГўв‚¬в„ўs capillaries blush in disbelief.
In PlatoГўв‚¬в„ўs Republic we are drawn to the image of Man shackled in chains to face the far wall of the dark cavern in which he finds himself imprisoned. Outside, illuminated by vivid flames, phantasmatic creatures carrying sculptures and effigies dance across the caveГўв‚¬в„ўs threshold to cast shadows and vague silhouettes onto the back wall. We are enslaved, Plato tells us, to the inferiority of indirect phenomena; only through the play of art and poetry, represented by anecdotal silhouettes and unappreciable casts, can we hope to detect the slightest essence of metaphysical truth; only the enlightening flame of art can save us from the concrete fetters of bland physical matter and base thoughts.
It demands little evidence to realise that PlatoГўв‚¬в„ўs notoriously literal metaphoric illustration of appearance and essence has scoured its effect upon the collective artistic psyche; causing shadows and lights of all description to flicker and creep inside the cavernous interiors of blacked-out galleries everywhere. Yet Noble and WebsterГўв‚¬в„ўs contribution to the dubious Platonic light/shadow-genre is enmeshed both in self-doubt and in the cautious irony that self-doubt engenders; since, if they seem to be aiming to incorporate the usual procession of humanist essences that have been so earnestly flogged to death and pimped out as the sincerest of sentiments - of love and death ad infinitum - then the sheer libidinal Wattage of Noble and WebsterГўв‚¬в„ўs illuminations threaten to solarise the very heart of the Platonic soul, which, in Toxic Schizophrenia (1997), finds itself stabbed and reduced to a vacillating digitised grid of little coloured bulbs that fills and empties itself of blood.
Similarly lurid, the self-replenishing golden crucible of Excessive sensual indulgence (1996), gushes with crystalline droplets that only require us to be fascinated with the infinite circulation of its spectacular effect. A bleeding heart emblem and a golden fountain may not have too much thematic content per se (unless, of course, youГўв‚¬в„ўre a sailor or crusader, respectively). It is in the resolutely narcissistic flexing of the spectral effects lifted from seaside illuminations and not the content of the work itself that fuses the viewerГўв‚¬в„ўs expectation for an edifying metaphorical return for their time. And because the content could appear largely arbitrary, and the essential aesthetic aim so resolutely low, Noble and WebsterГўв‚¬в„ўs Platonic ideals are sadistically benign enough that we begin to waver in our belief that there is anything at all beyond these digital sequences that blink in and for themselves. We are merely experiencing pulsing lights that have short-circuited the metaphoric obligation to channel the viewerГўв‚¬в„ўs gaze towards a higher aesthetic end - happy instead to watch the auto-erotic display tickle itself pink, red, blue, yellow and orange.
If doubt remains, the audible clang of Noble and WebsterГўв‚¬в„ўs metaphoric chains link up much too simplistically to allow any residual metaphysical payload the super-heavyweight status it might otherwise expect in more artistic hands. In this sense it is metaphysics itself that threatens to become fettered in plastic chains and set inside a brightly-lit cell to squint at the blinding appearances and smart at the obliterated essence.
The most precarious and interesting work, Miss Understood and Mr Meanor (1997), is a textbook emulation of PlatoГўв‚¬в„ўs phenomenological cavern. In a darkened room a projector casts light onto two separate assemblages of accumulated trash that look like waspГўв‚¬в„ўs nests perching on two vertical wooden poles. Deft manipulation of the mass of assorted textures (a broken plastic doll, a disposable lighter, a condom), causes immaculate profiles of the artistГўв‚¬в„ўs heads, decapitated and impaled upon skewers, to be cast onto the wall.
On first inspection, the alchemic process that transubstantiates crappy-plastic into beautiful-shadows whiffs of Platonic idealism. As with the two accompanying light-works, we might detect the malignant presence of a value-machine that plunders seaside-treasure and appropriates ersatz debris in order to magic them into transcendent bourgeois wares. Even the critical incorporation of kitsch as a counter-cultural value does little more than intravenously inject bloated sophisticates with the presentation of more matter to redigest. After all, kitsch is nothing but the reification of anotherГўв‚¬в„ўs detritus, the regurgitated splutter of cast-offs recycled through the mercenary taste-glands of de-constructive vultures. Luckily for us homeless pessimists, Noble and WebsterГўв‚¬в„ўs aesthetic sublime is considerably less gushing than it is gushing with digital blood. The sight of the ameliorated silhouettes of the two artistГўв‚¬в„ўs dead-heads reminds us, as Kant warns, that it is an oversight to assume that the aesthetic sublime should be an entirely welcome or even human experience at all - that vampires and ghouls share the same noumenal habitat as beautyГўв‚¬в„ўs essence.
Noble and WebsterГўв‚¬в„ўs aesthetic nihilism seems to sidestep the misapprehension that metaphysical idealism can be fatally wounded. Instead, like all persistent misanthropes, they simply reselect Гўв‚¬ЛњsincerityГўв‚¬в„ў for the odd special occasion when they might feel like wheeling its carcass out and stepping on its toes.