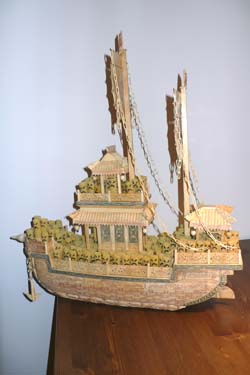 50.8 x 35.6 x 15.2 cm
Anyone who thinks that Olaf Breuning‚Äôs Cat is a fictive creature, and perhaps a tad out of the ordinary, would change their mind after seeing Breuning‚Äôs 1999 film Woodworld, a lo-budget, hi-sci-fi extravaganza that makes Slava Tsukerman‚Äôs 1982 Liquid Sky look like a masterpiece. 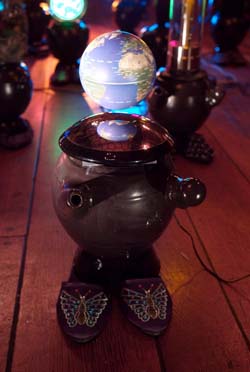 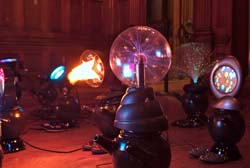 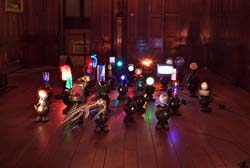 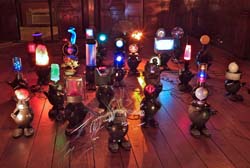 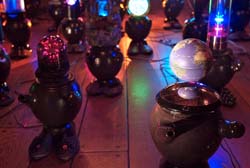 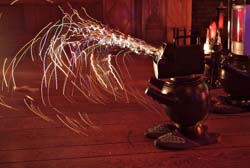 Dimensions variable
In this dark forest, where ghostly lights waltz to the sounds of the Nutcracker Suite and tiny alien spacecraft flash through patches of fog belched regularly by machines (it has to be said that Breuning is brilliant at Special Defects), Cat would appear as a thoroughly ordinary forest dweller, at one with the supernatural spirits which inhabit the trees (in a related work, the trees actually grumble and complain). 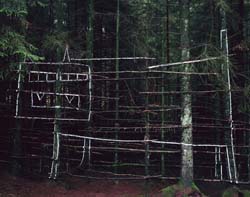 122 x 157.5 cm
At home here, too, would be Breuning‚Äôs Collage Family, who have suddenly appeared, fully unformed, with their addled brains and rickety frames stuffed with broken fragments of pop culture. 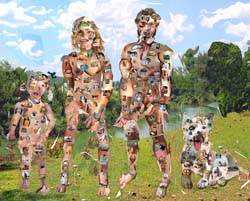 121.9 x 157.5 cm
For critic Travis Jeppesen, the very meaninglessness is the message: ‚ÄúBreuning’s art reflects the shallowness and veiled lunacy of the everyday, and the ease with which it may be disrupted, if only the effort could be made.‚Äù

"He's a culture hopper, he's a different kinda guy ..." So sings a campfire strummer from a theme-park Wild West town about the chameleonic protagonist of Swiss artist Olaf Breuning's appallingly entertaining new video Home, 2004. A thirty-two-minute, double-screen mini-epic filmed in settings ranging from Machu Picchu to the Venetian Hotel in Las Vegas, Home is a relentless parade of absurdist scenarios that veer from situation to situation and mood to mood with alarming unpredictability.

Secreted behind a tall wooden fence, Breuning's most ambitious production so far lies in wait like some undiscovered species. Equal parts home movie and music video, it casts actor Brian Kerstetter alongside a host of the artist's friends and other nonprofessionals. Kerstetter, whose gawky frame, unkempt hair, and wide, pale eyes lend him an unhinged air even before he opens his mouth, gives a genuinely unsettling performance. On the right-hand screen we see him in black and white, bouncing off the walls of a swanky hotel suite while introducing or narrating a series of anecdotes that are enacted, in color, on the left. Each episode (there are ten altogether) begins with an easily recognizable scenario but soon spirals into something stranger.

In one scene, an underground parking garage is the site of a clandestine rendezvous. Gang members salute each other by crossing golf clubs, then pile in a car and drive out to Amish country for some fun. When Kerstetter witheringly compares the rows of white-painted houses that pass to "freshly bleached teeth in the mouth of God," we know that the meeting of these two cultures will be far from a match made in heaven. Sure enough, when the posse spot a young man walking by the side of the road, they tackle him, strip him, pull an E.T. mask over his head, and chase him off across the fields in a set-up that could have come straight from an episode of the British interventionist comedy show Trigger Happy TV, in which similarly absurdist minidramas are staged unannounced for an audience of bewildered passersby.

In between kitsch and bleak suburbia comes a strange reality, from America.

The Australian Centre for Photography is posting an extreme artistic trifecta.
There is rampant kitsch in constructed tableaux from the Swiss artist Olaf Breuning in Home; black-and-white reportage from the Americans Ed and Deanna Templeton ( Be Passers By and Your Logo Here); and artless, everyday observation by Australia's suburban camera laureate Glenn Sloggett in Cheaper and Deeper.

Breuning possesses a vivid imagination with little, if any, reserve. Once an idea for a scenario is reached, he takes the image to the limit. In Vampires, 2000 an ill-assorted quartet sit in the dirt at night, grimacing through fake vampire teeth. Behind them, a closed coffin rests on a shadowy knoll.

Breuning's subjects are a curious assortment - a rotund, bare-chested black man, a pale, long-legged Caucasian youth, a chubby woman almost hidden by shadows and a nude female sexual mannequin. The last figure seems to be the picture's linchpin - her pose is deliberately revealing and she seems distracted, by what we are not told. A seated skeleton between the black man and the youth completes the surreal scene.