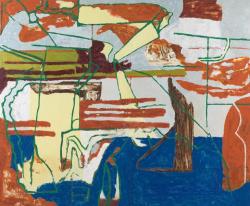 Oil on canvas mounted on Gator Board

193 x 223.5 cm
"Natureâ€™s unfolding truth emerges only with the active participation of the human mind, and this is the engagement I would like to encourage."

Paul Bloodgood begins his process with a collage that combines fragments of his own paintings with [reproductions of]those of other artists, from Jackson Pollock to Paul CĂ©zanne; the results read like a jump-start conversation between abstract painting and cartography. 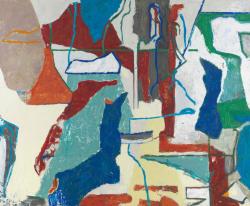 Oil on canvas mounted on Gator Board

193 x 233.5 cm
Reading, Waiting, Copying, 2010, and Thing Language, 2010, each describe a reconfigured landscape of distorted scale and inconsistent or limited perspective, laid out on the canvas in rich, earthy-coloured shapes threaded together with intense lines. The initial collages create physical boundaries that are functional in putting the composition together which he then partially smooths out when he makes the paintings themselves. Even though the physical fragmentation isn’t carried over, the result reads in visual terms like a lack of punctuation, as areas of the painting are butted together and collide to create a new language. Bloodgood retains enough of the angular awkwardness of the mixed-up styles and scales to build up a structure within the composition, but does so in a way that lets the perspective move back and forth within the pictorial depth with a fluid lyricism. The illogical spatial relations, imbalances and distortions become the subject of the painting as much as their original source.
The physical disordering that takes place in making the collages is echoed by the conceptual jumps between painting styles of other artists which are both transferred, in different ways, into the paintings. These fictitious landscapes become investigations into quotation and reinvention and celebrations of imperfection.


Some triumphalism - okay, naked glee - was to be expected in the wake of the New York auctions. Both Christie's and Sotheby's took out full page ads in the New York Times to trumpet their respective World Records For A Living Artist (the Freud) and For A Contemporary Work Of Art (the Bacon). And let it be duly noted that these ads were not in the Arts supplement but the main news section of the paper. And since then there have been plenty of in-your-face megashows - Robert Therrien at Gagosian, Lee Bul at Lehmann Maupin, Urs Fischer and Gavin Brown at Tony Shafrazi - to keep the balloon in an updraft.

'Three Painters', the show that just went up at David Zwirner on West 19th Street, comes from a different artworld terrain. The three painters are Leonard Bullock, Paul Bloodgood and Greg Kwiatek. They are in their fifties and long-time friends, but their work is dissimilar, except in being deeply considered and demanding the same from the viewer.

Bloodgood makes abstracts, using a vocabulary of graphic marks to galvanise the surface. The viewer can easily feel that he is looking down upon or across an energy field. Kwiatek's canvases are nature-based, but painted into near abstracion. Most of the ones at Zwirner show the moon. "Some were painted from direct observation. And some are a combination of observation and just painting," he says.
"I go to this island in Maine. The ones that I make up there happen over a period of years. I go in August. And if I haven't finished a painting in August then it's another year before I get up there again." Bullock also takes his time. One of his canvases has a timeline of 2002 to 2008. "It wasn't like I was working on them every day. But they were always brewing. They were percolating for a long time," he says. "I never have been able to keep my hands off things like this. I wanted to make them richer. Evelyn Waugh talked about how he really envied painters because they could keep working on something until it had the richness they really wanted. Most of us don't. Most of us don't do that. I have tried. But I think you would be really hard-pressed with many of these works to say what the duration was. Some people might day, oh, he did that in an afternoon."

The Zwirner show is clearly timely - the market and media-induced giddiness is, I sense, beginning to make some people queasy - but it's more than just a deft piece of counter-programming. Leonard Bullock was invited to Germany by David Zwirner's father, Rudolf. 'I showed with Rudolf in 1986. He had invited me to come over there. And I stayed there three years. And he basically footed the bill. He sold things and paid me. It was a dream." Bullock says.

"That was a heady time to be in Germany. It was the first time they had been discovered for something other than their black past. In Cologne it as a Richter/Polke time. And that was very, very good. Those people had a very good influence on the art scene."

Bullock met David Zwirner when he was young. He subsequentlly introduced him to both Bloodgood and Kwiatek. Hence, ultimately, this show. "David Zwirner did the right thing," another painter said at the opening.