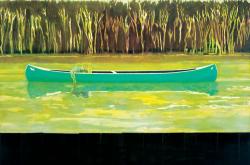 200 x 300cm
Themes of magical realism stream through Peter Doig‚Äôs work, capturing timeless moments of perfect tranquillity, where photo-album memory flits in and out of waking dream. Drawing from his Canadian childhood, and one of the spookier scenes from Friday the 13th, Peter Doig‚Äôs canoes have become a seminal image in his work; their reflection in the water, like a double life, is a fantasy mirror to the unknown. Canoe-Lake is rendered with unsettling perfection: capturing not just a spying view over a fence, but the strange echoing silence of drifting on a lake, the impossible stillness of the current, and the cloying warmth of late-summer air. 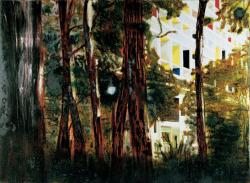 198 x 275cm
Peter Doig‚Äôs paintings of Le Corbusier‚Äôs classic modernist apartment block offer a mysterious Utopia: cosmopolitan dream architecture nestled in (or imprisoned by) tangling wilderness. In Concrete Cabin, it‚Äôs the nowhereness of the scene which is strangely uncanny: the bright minimalist grid of the building beaconing through the dark shadows of the trees; an everyday glimpse from a suburban sidewalk twisted into something magical; a set from a contemporary fable. Peter Doig paints this scene with chimerical effect; cropping the image to exclude ground or sky, it has no physical orientation or weight, only the intangible presence of a fleeting moment. 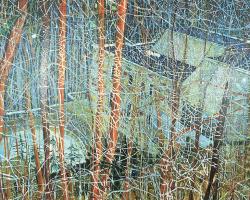 Peter Doig
The Architects Home In The Ravine

200 x 275cm
Plainly in view but physically inaccessible, Peter Doig half obliterates The Architect‚Äôs Home in the Ravine with an underbrush as dense as a half-finished Pollock and the scene becomes foreboding: something out of an Edward Hopper or an Andrew Wyeth painting. With all the richness of the distant woods and the stunning architecture to look at, it‚Äôs the twigs which steal the show. Peter Doig‚Äôs painting reinvents the way a picture is meant to be looked at. 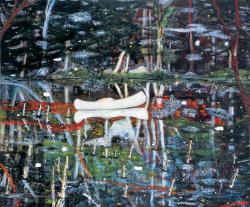 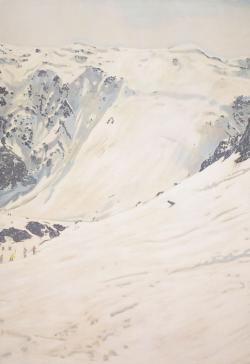 290 x 199cm
In White Creep, a vast snow-capped mountain juts upward in a way that dwarfs the sky. The snow is white and fresh, yet there is depth to it, implying that this mountain is permanently covered in snow. The snow is an abstract tapestry of white with craggy black rocks peeking through. It is like a Clyfford Still of whiteness, with a palimpsest of grey and blue evident below the surface. The sources for Doig‚Äôs works can come from film, photography, or clips from contemporary visual culture, yet he makes paintings of scenes that could only really be actualised as painting. 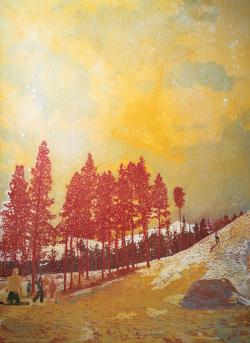 276 x 201cm
The contemporary snowboarders seem oddly out of place in the Renoir-dappled sky and Derain-speckled drifts. But it‚Äôs the way Doig masters this illusionary effect of the paint that creates a convincing, almost tangible fourth dimension - the muffling stillness of the air, the soggy feel of slushing snow, the crisping smell of twilight. Doig plugs into a nostalgia that photography can never capture: the physicality of his paintings makes these generic memories more vivid and desirable than the viewer‚Äôs own. 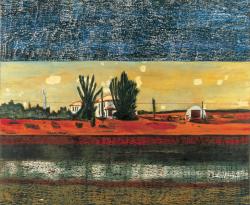 200 x 250cm
Based on the viewpoint of an insect whose perception of the world is found at ground level, Peter Doig created the Grasshopper using three equally spaced bands that command its composition. Broadly coloured yet intricately detailed, this device appears to mimic the geological strata which construct the earth. The top band contains the abstraction of the sky, created from the thin veils of vivid blue masked with successive layers of dragged and dabbed paint. The middle band contains the land, a small settlement isolated in the desert of an arid landscape, the telegraph poles and lines the only clue to the connection with the developed world. Infused with a rich warmth of light, this is a nameless landscape in the middle of a barren land, of no specific time. Reminiscent of the setting for the film Paris, Texas, the only clue to its identity would be the single figure buzzing around a garage.

Contrary to his hooded figure, Peter Doig does not sit in the landscape reconstructing the romantic image of the painter in nature. His own and other people's photographs, the sum total of the media image archives, the images of art history, the cinema, music, architecture, sports, landscapes -they are all realities in his studio that call forth but do not model his paintings. In his works, these realities overlap, generating the present as a juncture of places, times, ideas and styles. In the composition, all the methods of image generation from photography, film, and painting, as well as painterly reproduction techniques are used: the optical options of photography make use of perspectives, relations of size, and segmentation; his painterly technique uses all the artifice of art history: the specific styles of Segantini, van Gogh, Munch and Edward Hopper appear just as much as pointillist effects, impressionist traits, Pollockian all-over patterns, clumsily-naive illustrative techniques, or water colour effects painted in oil. In so doing, Doig's painting insists on the triviality of painting as such, allowing itself to become hypersensitive, or smudging its contours, or cancelling itself out.

Peter Doig was born in 1959 in Edinburgh (Scotland) and grew up in Trinidad and Canada. At the age of 18, he moved to London and studied at the Wimbledon School of Art (1979-80), the St. Martin's School of Art (1980-83) and - after a temporary return to Canada - at the Chelsea School of Art (1989-90). Straight after that, he won the Whitechapel Artists Award (1990), and his first museum presentation soon followed. In 1994, he was nominated for the prestigious Turner prize, which put him in the international spotlight.

With his large-scale, old-fashionedly laboured landscapes and pastoral themes, Doig was the odd one out in the London of the early nineties, where the Young British Artists, led by Damien Hirst, were attracting attention. Nowadays, Doig is mentioned in the same breath as contemporary figuratives such as Luc Tuymans and Neo Rauch, who are giving convincing shape to a new-symbolic form of painting. This iconic form of painting does not really dismiss the figurative meaning of an image, but it certainly does not provide a one-to-one relationship with the perceptible world. Photography and film are important sources for these artists, and they draw freely on them, recognizing the suggestive narrative power and subdued tension of a well-chosen film still or photo.