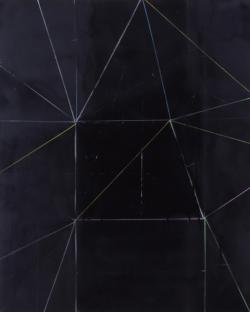 Peri’s canvases seem to extract a disquieting mysticism from their sparse pictorial fields. Within the pristine contours of his diagrammatical motifs, Peri interrupts the ascetic sterility of his surfaces with minute traces of intimate intervention. In areas the pitch density of his veneers spontaneously bubble over impasto under-painting or erode to leave an oil-stained effect; while delicately rendered lines and arcs shift imperceptibly in tone, some vanishing into nowhere, others interceding with trailing drips of paint. Through this subtle mediation, Peri’s work entrances with a rarefied elegance, creating a highly articulate abstraction that is both analytical and tactually elusive. 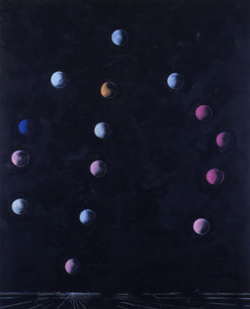 Peri’s grandfather was a well-known Constructivist artist and is a primary influence in his work. “I’m very interested in the roots of early Modernism, Suprematism, Dada/Constructivism,” Peri explains. “All the elements which were used to fill the gap left by the absence of the figure, e.g. the allusion to tradition as validation in compositional rigor, political commitment, the pseudo science of people like Pyotr Ouspensky concerned with higher knowledge, the 4th dimension etc.; and in the anxiety involved in that, the excess of stuff that gets poured into the sparseness of geometric abstraction. There’s something psychologically painful about looking at all that effort towards human advancement that was lumbered onto abstraction from where we are today. The pattern of the balls in this painting reminded me of Velasquez portraits of the Infanta. I liked the idea of them as desolate units forming into an absurd representation of a figure.” 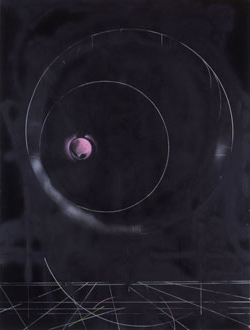 “The title is from H.P. Lovecraft’s Call of Cthulhu,” Peri reveals. “I thought that the two circles had the look of sound waves, so this painting became about a relationship between a sound and a moment of visual appearance or birth. Lovecraft’s personal take on Futurism was a horrified one (in his story the call summons up a monstrous 4th dimensional creature and city) and I’m interested in that abyssal aspect of Modernism as a movement of new beginnings, its unfamiliarity, and the violence involved in the idea of abstraction. When I work I only use spray paint, silver marker pen and 4 colours; pink, yellow, green, and blue. I use ruled lines and stencilled shapes (the balls are made by spraying through a masking tape roll). The idea is to try to preserve that sense of violence and distance that not working freehand creates; I want to avoid them becoming expressionistic in a certain sense." 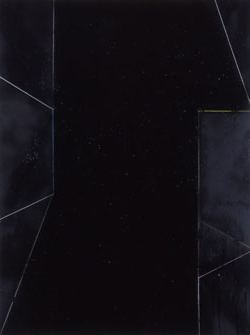 “A Slab Block is a type of housing estate block, like Corbusier’s L’Unité,” Peri says. “I wanted the implied monumentality of the title to apply to a fairly modest size painting. I grew up on an estate with lots of these blocks and I liked that this painting might be a messy ill-constructed attempt at making a structure that stands up and contains itself. I want the work to always show its construction: the thickness of surfaces built up, the ghosted lines of marks visible underneath the surface. I don’t want the paintings to be clean and flat in order to assert their contemporaneity, rather that they show a problematic depth and broken surface, which seems to me more appropriate for the history of abstraction. There’s a Markus Lupertz quote I really like, that “abstraction is like the apple of knowledge - once it’s been tasted there’s no going back", which I take to mean that now one has to circle around it somehow.” 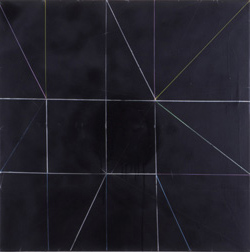 “This is a very grid-like painting but the grid seems to be covering a darker hole which threatens its integrity,” says Peri. “The hole is a patch of gloss black over the rest of the surface which is matt black. This difference in paint finish is something I use a lot, it seems to posit depth - often there’s a grid at the bottom of the paintings too which indicates a rudimentary perspective. I think of that kind of illusionism as both a formal element to create interior space and a sort of armature to be disrupted.” 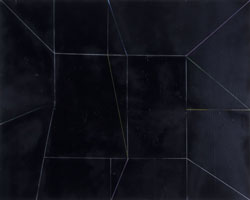 “Like Slab Block, Village House presents an idea of a precarious constructed unit, but at the opposite end of the architectural scale,” explains Peri. “I never start with a sketch or an idea, the paintings always come about from trial and error, looking for something new that seems to hold the picture surface in tension, I think a lot about the edges of the canvas and supporting them. The surface gets a kind of lacquered quality from the many coats of spray paint, but because I paint quickly, correcting and painting over things, it also gets very heavily worked and pitted. There’s this feeling of alternately revealing and hiding when I paint.” 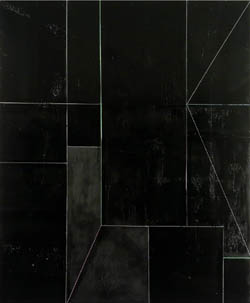 Peter Peri
The Hearing Forest and The Seeing Field

“The title is from a Bosch drawing where a tree has ears and a field has eyes,” says Peri. “The idea of a problematic or absurd attempt at anthropomorphizing is important for me and I like titles that imply a bodily presence. I think I started to see the squares in this painting as possibly both holes in a structure and apertures looking out.” For Peri, these physical transferences or possibilities are inherent within his understanding of geometric abstraction, a drive to “discover oneself” in the work, and find one’s own place and position within art’s history and continuity.


Look closely at Peter Periâ€™s drawings and a multitude of tendrils shimmer and writhe in tiny capillary movements. Against unbleached paper the texture of pumice stone each hairline bulks out into an undulating graphic wormery that tickles the eyes. Back away, and elementary shapes begin to constitute themselves cancerous tumours, rectilinear slabs, or the occasional graceful arc redolent of an architectural detail. Some of these follicle stylings amass themselves into more readily identifiable representations; an exotic looking headrest, say, or an ornate ceremonial religious prop.
These forms are positioned awkwardly on the page, like cress seeds sown on damp tissue, left free to grow. So fibrous are these drawings that I almost feel the urge to shave them. And such a peculiar choice of imagery Roman Catholic reliquaries, ethnographic trophies, sleek Modernist graphics.

The word that springs to mind looking at these images is holistic not a particularly fashionable one to use in art criticism, with its echoes of New Age marketing or the kinds of artists who still think itâ€™s worthwhile pursuing quasi-religious giganticism. Yet the idea of holism put snappily by the Penguin Dictionary of Modern Thought as the thesis that wholes, or some wholes, are more than the sums of their parts in the sense that the wholes in questions have characteristics that cannot be explained in terms of the properties and relations to one another of their constituents seems apt in Periâ€™s case. On a purely formal level (if there is such a thing) they oscillate between microscopic and macroscopic levels, old-fashioned studies in opticality.
By extension, Peri zooms from microcosmic particulars to macrocosmic leaps of imagination, asking how we allow ourselves to invest illusory belief in mute images and objects. The less abstract choices of subject matter suggest that the artist is interested not just in an aesthetic holism, but one that is metaphysical (objects of religious devotion), scientific (strange biological forms, titles alluding to complex muscular movements, to the idea that parts of an organism are not isolable from the corporeal whole), and political. Peri has a direct family connection to early European Modernism: his grandfather was Laszlo Peri, an Hungarian Ă©migrĂ© to Britain who was involved in Constructivism before turning later in his life to more figurative Socialist Realist work (which at the time was championed by none other than Britainâ€™s infamous art historian turned Russian spy, Anthony Blunt).