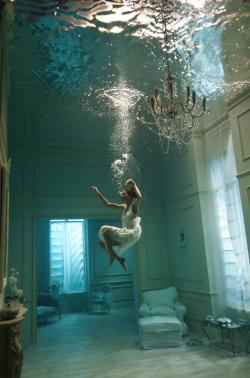 Using her “Underwater Stage” as a backdrop, Phoebe Rudomino has her subjects and muses swim, dance and twirl—fully clothed—in tanks full of water. Her images alternate from brightly illuminated ethereal shots like her Johnson and Johnson’s submersed ballerina image, to the sensual, dimly lit shots in her Water Nymph collection.
Needless to say no two shots are alike as water flows around her subjects with a keen eye and sense of adventure, why dabble on the surface when going under water is so alluring? Seems to me Phoebe Rudomino is the real water nymph.
Based at the Underwater Stage, Pinewood Studios, Phoebe specializes in behind-the-scenes underwater stills and video for feature film, TV and commercials. Film Credits (underwater EPK and/or Publicity Stills) include Casino Royale, Atonement, Elizabeth The Golden Age, Death Defying Acts, Mr Nobody, The Boat That Rocked, Sex & Drugs & Rock & Roll, Clash of the Titans. Just to name a few.

Having worked as a scuba instructor in Sweden and London, as a Dive Master in Tanzania, and working towards qualifying as a Master Scuba Diver Trainer, 22-yr. Old Phoebe Rudonimo-Dusiacka, is a dedicated and enthusiastic diver. She is keen to further her diving capacities and is mindful of how her position could be a trustworthy vehicle in promoting underwater awareness.
An avid diver, Phoebe’s passion began when she enrolled in a PADI Open Water course as a precursor to her role as a translator for the Galapagos Marine Reserve in Ecuador. She hopes to experience ice diving, continue cold-water diving, and looks forward to delving into underwater photography and filmmaking.
Phoebe is a graduate in Philosophy and Modern Languages having studied at the Sorbonne, Paris and University College London. She is pursuing a M.Sc. degree in Social Anthropology today. Phoebe has been actively involved in a number of international humanitarian projects. She has worked for an NGO in Nepal and experienced conditions of segregated ghettos in Tibet, all of which challenged her personal ideas about power and epistemology and helped her to form a number of theories about the anthropology of conservation.

Taking fashion photo’s above the surface didn’t cut it for Phoebe Rudomino; this innovative photographer specializing in underwater fashion photography.

Using her “ Underwater Stage” as a backdrop, Phoebe Rudomino has her subjects and muses swim, dance and twirl-fully clothed- in tanks full of water. Her images alternate from brightly illuminated ethereal shots like her Johnson and Johnson’s submersed ballerina image, to the sensual, dimly lit shots in her Water Nymph collection.
After looking at Phoebe Rudomino’s stunning shots, take a look at some of the other innovative underwater fashiontography featured on Trend Hunter before.

Photography is often hard enough to master on dry land, let alone underwater. Despite that, UK-based photographer Phoebe Rudomino has most definitely mastered the art, and specialises in underwater still photography and video at the Underwater Stage in Pinewood Studios. Her list of credits in film, television and advertising is quite extensive, to say the least.
Below, you will find a collection of some of Phoebe’s work from various projects throughout the years. However, I would strongly encourage you to pay a visit to her portfolio as that is where you will find her best work