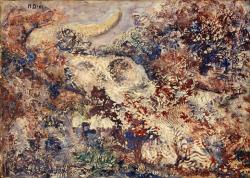 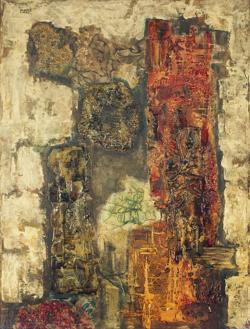 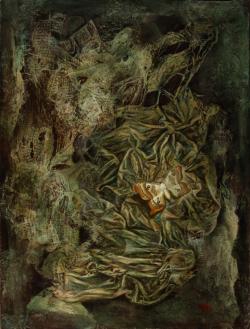 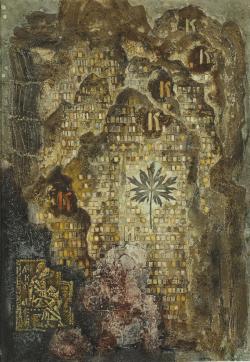 Dmitry Plavinsky
THE LEAF OF LIFE

Mixed media on canvas laid down on board 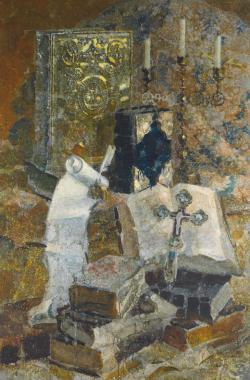 "I painted “Still-Life with a Cross” on the former estate of Nikolai Ostrovsky Shchelykovo. It is a large estate with a grand house, church and graveyard, where the playwright is buried. In the 1960s the church was closed, but it was kept perfectly intact, because it was under the authority of the Ostrovsky museum. The museum workers gave me the keys to the church and allowed me to work there. I was locked alone in the church, composed a piece from the objects located there and also painted there. It was uniquely beautiful and mysterious. Unfortunately, during perestroika the church was robbed and all the icons, books and religious items disappeared forever,” Dmitry Plavinsky. 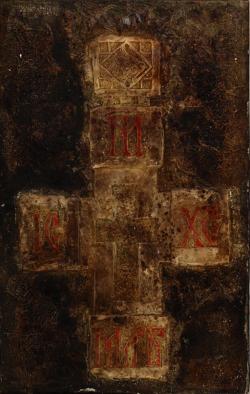 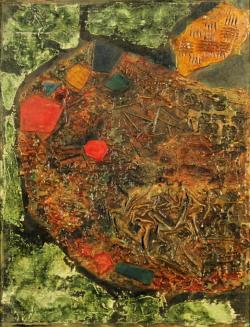 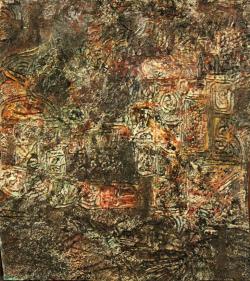 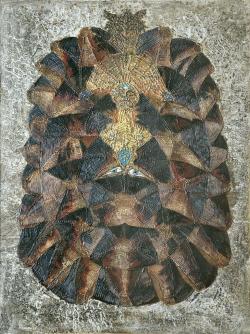 Dmitry Plavinsky
SHELL OF A TURTLE

“There exist forms and ideas which move us to reflection. For me, one of them is the form of the turtle, which, like the fish, recurs through my work. I have read a lot about turtles and know a lot about them. The Chinese consider the turtle to be the symbol of the universe, and since I am a symbolist, the shell and armor of this animal carries a far deeper meaning for me», - Dmitry Plavinsky. 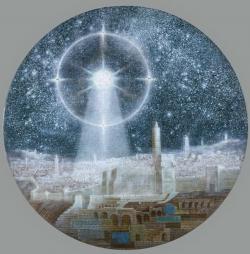 “We were in Jerusalem and one night we saw an unusual phenomenon in the sky, which only happens once in a hundred or so years – there was an enormous moon in a luminous halo, which, it seemed, enveloped the entire sky. That is how the idea for my painting, “Heavenly Occurrence Over Jerusalem,” was born. I love archeology, history, and this city is the crossroads of various religious denominations and cultures, and it is tied to many legends and biblical histories, which have accumulated and create a feeling of duality. If you look at the painting attentively, then you notice that it is entirely filled with words and letters in different languages. The entire sky, for instance, is filled with Arabic characters, excerpts from the Koran, and the city is divided into quarters – there is a Jewish and Armenian quarter, and there is a quarter where the crusaders lived. The houses in each of the quarters are decorated with scripts from the corresponding alphabets – letters in Hebrew, Latin, there are specks of Old Church Slavonic and Armenian. These elements make up the city, civilization. When I made this painting, I was fascinated with Kabbalah. If we look at the painting again, then we can read one of the names of God – each of the four letters of his name are placed sequentially across from the watch hands in the halo around the moon. The form of this work is also unusual. This is also linked to a story. Once I was sitting on a round chair and it broke. I had made “Bach’s Fugue” on that chair, along with two paintings. I really liked to paint on a circular canvas, because linear perspective doesn’t work. It’s an extremely tricky form. When we lived in New York, I was able to order a round canvas of any size, and when I thought up “Heavenly Occurrence Over Jerusalem,” I saw it as a round painting, just like that bewitching moon,” – Dmitry Plavinsky.

Creation by human thought and hand is sooner or later absorbed by the eternal poetry of nature: Atlantis by the ocean, the temples of Egypt by the desert sands, the palace and labyrinth of Knossos by volcanic lava and the pyramids of the Aztecs by the jungleâ€™s tentacles. For me, it is not the birth of a civilisation which is of greatest interest but its death and the moment its successor is born â€¦â€™

1937 - 2012
Dmitry Petrovich Plavinski is one of the best masters of the Moscow â€˜unofficial artâ€™. Between the 1960â€™s and 1980â€™s he was among the so-called â€˜twentyâ€™, a group of Moscow artists called the â€˜avant-gardistsâ€™, back then he also took part in many exhibitions which at the time were notorious. In his own words, the artist describes the artistic movement he developed as â€˜structural symbolismâ€™ where an integral view of the world disintegrates into a sequence of symbolic forms, subsumed into the strata of time â€“ the past, present and future. Astonishing for their execution, Plavinskiâ€™s etchings and Indian ink and brush drawings, his painting as well as his graphical works stand out for the unusualness of their intricate texture and technical execution. The multiplicity of meaning and metaphysicality are somehow historically intertwined with the material and continue in the vein of the classics â€“ DÃ¼rer, Goya and Rembrandt. From 1959 onwards, Dmitry Plavinsky travelled extensively and worked in a number of northern Russian towns â€“ Novgorod, Pskov, the Ferapontov Monastery, Yaroslavl and Kostroma. The artist began with abstract painting (1962-1964). In 1964 he produced a graphical book of grasses painted from life after which he finally moved across to figural painting, as well as texture painting, and his works increasingly included religious motifs. In the middle of the 1960â€™s the artist created large canvases entitled â€˜Gospel of Johnâ€™, â€˜Novgorod Wallâ€™ and â€˜The Ancient Bookâ€™ which used plastic and ligatures of scripts from ancient Slavic texts. Etchings played a prominent role in the artistâ€™s work.

â€˜â€¦The most important thing is always the same â€“ a love of structures; structuralism permeates everything: whether the artist is painting pictures, studying stone bowls, exploring mushrooms, bark, insects â€“ in all cases he is searching for this astonishing rhythm in various structuresâ€¦If there is no structure, the artist cannot work. If they exist, then it matters not if he paints with care from nature a web of leaf veins or, placing some plaster onto a board, enriches it with imprints of pieces of hessian, mesh, different objects â€¦Plavinsky is not interested in colour, the job of colour is solely not to impede the revelation of structureâ€™. L. Kropivnitski, 1965