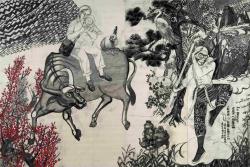 Having trained in both Chinese high-realism and European multi-media schools and worked professionally as a decorator and designer, Qiu Jie’s drawings are informed from a wide range of aesthetic influence. ‘Qiu Jie’ itself is an adopted pseudonym: meaning ‘foreigner’ or ‘outsider’, conjuring images of a mysterious stranger negotiating the terrains of imagination. This sense of myth-making, exotica, and expedition is reflected through Qie’s work.

Executed in massive scale, and taking months to complete, Qiu’s pencil drawings are achievements of awesome endeavour. His painstaking process is canonised in the timeless quality of his images, which merge the styles and iconography of ancient Chinese art with traditional and contemporary Western imagery and references.

In Pèlerinage Vers L’Ouest, Qiu appropriates the Christian theme of the Flight Into Egypt. Infusing the decorative intricacy associated with age-old artisanship with a narrative surrealism, Qiu’s modern day mother and child are woven into the fabric of Eastern consciousness – pictured heading to their exile from an uncustomary direction, and sat astride a bull, the Chinese symbol of life. Rendered on a composite ground of multiple sheets of paper, the fragmented surface gives the drawing an authenticated effect of historical artefact. 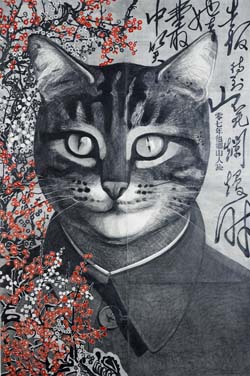 Qiu’s Portrait of Mao is a humorous play on words: "mao" means "cat" in Chinese. In traditional Chinese painting, an image of a cat holds special significance. Often coupled with a butterfly (to create "mao-die" or "long life"), it can be used to bestow a blessing. Rendered with the pastoral detail and calligraphy inscription of Song Dynasty masterworks, Qiu’s drawing takes equal inspiration from eastern philosophies of beauty and wisdom and the kitsch populism of western artists such as Cassius Coolidge (of Dogs Playing Poker fame). Meticulously drafted in lead on paper, Qiu’s sentimental homage offers a surrealist vision that’s alchemically toxic, and seductively coy.


Qiu Jie, pseudonym for the man who comes from elsewhere, was born in 1961 in Shanghai. Having grown up during the period of the Cultural Revolution, at the age of ten years old he started drawing and making abundant copies of propaganda images from the local newspaper. During his adolescence, he drew and painted with friends often until midnight.

In 1978, two years after Mao's death, Qiu Jie was admitted to the School of Decorative Arts in Shanghai where he received a rigorous training heavily based on realism. After graduating in 1981, he worked during six years as a designer and decorator for a state enterprise where he travelled to thriving cities in China to present products from fifty factories. Such business travels offered the young man a precious opportunity to feed his artistic imagination and constitute a source of inspiration in which he still delves today.

In 1985, at the age of twenty-four, he presented his first solo art exhibition at the Palace of Culture Xu Hui of Shanghai.

In 1989, thanks to the help of two animation artists from Geneva, he was able to pursue his studies at the School of Fine Arts in Geneva. He graduated in 1994 with a degree in multi-media. Through in-depth exchanges with professors from the school, he was able to develop a personal artistic mode of expression. In other words, his work conceptualizes the know-how and artistic techniques acquired in China while overtly confronting different cultures and shocks from distinct political systems.

Qiu's work is exhibited regularly in Switzerland, France and China. He has received various prizes and distinctions, and his work continues to be acquired by numerous contemporary art foundations, museums and private collectors.