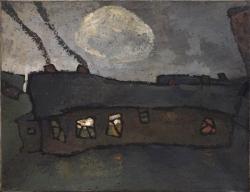 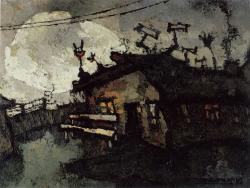 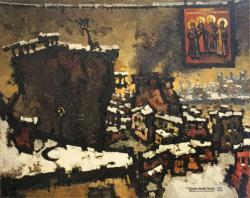 Oskar Rabin
AT THE GRAVE OF SIDOR POLIKARPOVICH 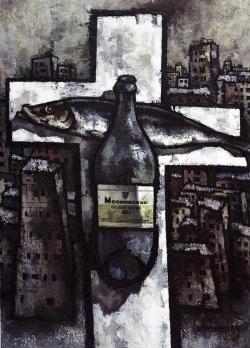 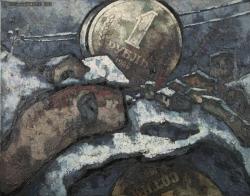 Oskar Rabin
VIOLIN AT THE CEMETARY 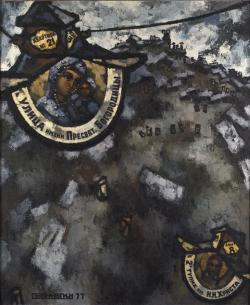 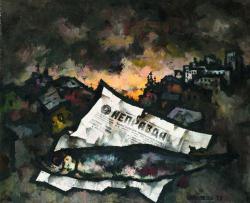 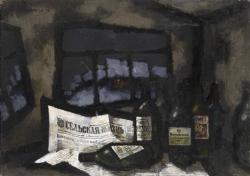 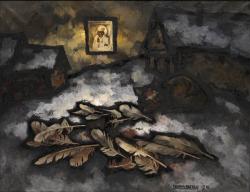 Oskar Rabin
THE ICON AND THE CAT 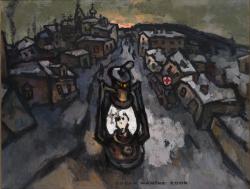 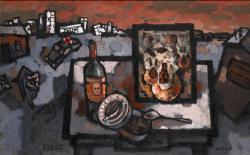 ŌĆśI worked as if possessed, trying to paint slick, syrupy, ŌĆśsafeŌĆÖ things which were easily within the reach of the understanding of the ŌĆśpowers that beŌĆÖ. I then destroyed these paintings one by one. I just couldnŌĆÖt bear to look at themŌĆÖ.
ŌĆśIn my painting, I experience the pleasure from the process itself, mixing and laying down the colours, enjoying their brightness and dimness, the subtle and broad brushstrokes, their smell. Then, I want express sorrow, happiness, hate, anger, love, thoughts about life and people. I want to capture life and communicate it through my own feelings. To achieve this, for symbols I use normal objects around me. Their meaning in painting is different than in real lifeŌĆÖ.

Born in 1928
Oskar Yakovlevich RabinŌĆÖs work, celebrated in the West as ŌĆśSolzhenitsyn in paintingŌĆÖ, honestly and eloquently reflected the mood in society during the 1960ŌĆÖs and 1970ŌĆÖs. An outstanding master with a deeply individual way of seeing the world, Oskar Rabin was one of the originators of non-conformism and one of the organisers of the ŌĆśLianozovo GroupŌĆÖ which grew up around Evgeny Kropivnitski. Over a period of seven years (1958-1965), the former camp barracks in Lianozovo, where Oskar Rabin lived with his wife, Valentina Kropivnitskaya, acted as the centre of the progressive intelligentsia. Surrounded by his family, life in a Moscow suburb with ŌĆśignobleŌĆÖ objects from everyday Soviet material life and its dramatic absurdity was for many years the central theme of RabinŌĆÖs creativity. The artistŌĆÖs favourite genres included landscape, still-life and interiors, continuing in the tradition of 1920ŌĆÖs European expressionism. Trying to imbue his painting with a social-critical tone and bring out the ŌĆśanti-humanityŌĆÖ of modern manŌĆÖs environment, Rabin uses a distortion of perspective, the principals of deformation and the destruction of large-scale relationships. Through his emotionally saturated style, as well as his laconic manner, Rabin interweaves different genres and artistic devices, elements of collage and assemblage are introduced into the paintings. The drama of the works is highlighted by chronological ŌĆśmarkersŌĆÖ, denoted by fragments of newspapers, stickers and labels. The uncorrupted truth of life, seen by the communist authorities as dissidence, released from the chains social-realism, was cause for Oskar Rabin to lose his Soviet citizenship. Moving to Paris in 1978, he gained there new inspiration and international recognition.

ŌĆśHis subjects are taken from the life around him, in other words he uses it as material. During the ten years or so that he lived in the barracks, he painted barracks. After moving to a new house, he painted new houses. He rethinks reality and gives it an exceptionally individual colouring. The face of the artists is staring out from behind each object introduced onto the compositionŌĆÖs canvas. His particular choice of items barely changes from one painting to the next: buildings, churches, bottles, fish, cats, crosses, icons and advertisements. Less often there are flowers, samovars, teapots, road signsŌĆ”ŌĆÖ. Leonid Kropivnitski

ŌĆ£I would compare Oscar Rabin with Gustav Kurbe, who cut down the Vend├┤me column, a symbol of absolutism. In the same way Rabin was a legend of unofficial art, which cut down the invisible column of the Soviet official art.ŌĆØ Leonid Sokov