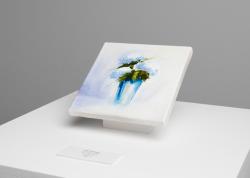 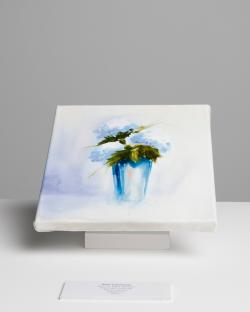 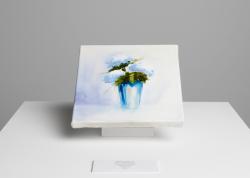 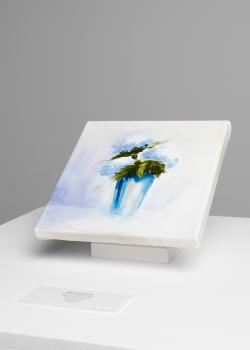 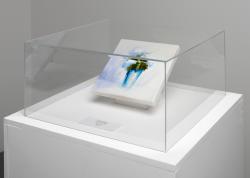 REFLECTIONS OF AN ALUMNI
June 25th, by Scott Causier, KLLKT

Experiencing the opening night of the annual Summer Degree show of the Manchester School of Art is an act of captivation, contemplation and reflection. As a previous graduate of the course it is always a sentimental ascension to climb the stairs into the transformed environment that one once referred to as the their creative hub for some of the most formative years of their life.
Within the Fine Art show there seemed to be a wealth of works reliant upon abstraction, heavily invested in the deconstruction and thinning of the materials that compose the works themselves. The paintings of one individual stood up and beckoned the viewer into the realm of their work. Rafal Topolewskiâ€™s aerial landscape paintings in particular were something to behold. Topolewski seems to truly harness and accentuate the qualities inherent in the materials that he uses. The application of simple, but well considered brushstrokes of glossy oils within the boundaries of his earthy palette seem to generate many moments that the viewer can revel in.

Human memory, manipulation on an image, deconstruction of idealised picture through memory and imagination, deformation of an information through new media, construct a discussion where lack of control in painting, in both areas, application of physical material on surface and initial decision of chosen image, are key points for my work, which became inconsistent in terms of image, scale, display. I try to explore possibilities of traditional medium in contemporary world through consistent inconsistency in solid structure, consciously changing the area of focus in my work. Inconsistency in my practice helps me to challenge interpretations of paint, to understand and explore image but what is the most important, it provides me a field for undefined debate.

As Frieze Art Fair becomes more and more entrenched on London's art scene, emerging artists are benefiting from the art mania that descends on the city each autumn.

New Sensations is probably the most visible example of that trickle-down effect. Launched just six years ago, the showcase of emerging artists founded by the Saatchi Gallery and Channel 4 is now the largest curated exhibition to take place during Frieze - partly due to joining forces with The Future Can Wait, a survey of young, progressive multidisciplinary artists set up by artist/patrons Zavier Ellis and Simon Rumley.
That it's free of charge has certainly helped garner attention. Anticipation is also building as to who will win the New Sensations 2012 prize - a career-propelling accolade last year won by Jonny Briggs. Judges, including artists John Stezaker and Richard Wilson, have already whittled down the vast number of entrants to a shortlist of 20, who make up the New Sensations section of the show. These include the four finalists: Nicolas Feldmeyer, Olivia Poppy Coles, Rafal Topolewski and Steven Allan.

My practice is based on the understanding and interpretation of information through memory and it's divided between abstract and realism, which finds its result in recalled images. Paint application provides a solution for long-term, short-term and sensory memory and builds a dialogue between information, picture and interpretation. The information which is used to create composition is various. It can be serious, trivial, accidental, planned, mechanical, spontaneous etc. Through paint I explore memory and define it by surface, gestural marks, colour and shapes, which helps me to understand the human ability to remember. Through the successive process of refreshed memory accumulation I try to build a new space for discussion about approaching the deconstruction of truth. It opens a new stage of explored reality.

My paintings are an exploration about different types of representation, about the fascination and power of painting, which can have an impact on human perception and on the creation of the modern world. Questioning myself what painting means in the 21st Century, I try to find diverse paint explanation.

The Alumni Award was presented to Rafal Topolewski by Elizabeth Murphy of Liverpoolâ€™s Royal Standard gallery.
The 29 year-old from Grudzadz, in Poland, was selling small versions of his paintings for ÂŁ6.08 â€“ equivalent to an hourâ€™s minimum wage payment.
He said: â€śThe idea came from anxiety about finishing University and not knowing exactly what kind of future was waiting. If you are really committed to art you have to make that your future, even if it means living on the minimum wage.â€ť

GRADUATE Rafal Topolewski has been chosen as one of the four finalists for the Saatchi Galleryâ€™s New Sensations award.
The 29 year-old from Grudzadz, in Poland was selected from more than 800 entries â€“ the largest number in the competitionâ€™s history.
Rafal, who now lives in Sharston, has just graduated from Manchester Metropolitan University with a First in Fine Art.
He said: â€śI would have been really excited and satisfied to be top 20 â€“ I didnâ€™t expect to be in the top four. For a few days I didnâ€™t believe it until my name and picture appeared on the website.â€ť