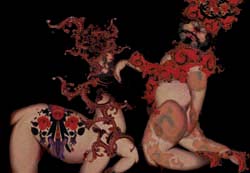 Reminiscent of the traditional motifs of Persian tapestries, architecture, fabrics, and carvings, Ramin Haerizadeh’s work reconfigures the decadence of an ancient civilisation into lusciously futuristic tableaux. Printed as large photographs, his computer manipulated imagery conveys all the sumptuous associations of history within their super-slick modern surfaces. Using these appropriated forms as departure point for invention, Haerizadeh transforms tradition, myth, and legend into the realm of virtual reality, subverting convention through high-impact graphic design and digital modelling. 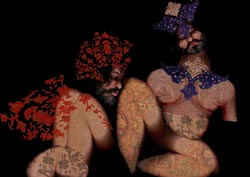 Haerizadeh’s Men Of Allah are influenced by Taaziye, an historic genre of theatre popularised in the Qajar dynasty (1794-1925). The plays often tell stories of the life of Mohammed, and are still performed during the Muharram observances which mourn the martyrdom of the Prophet’s decedents. In these photos Haerizadeh draws upon this religious ritual to stage scenes with the surreal dynamics of computer animation, displacing the sense of time, place, and gravitas, and conceiving the physical elements of theatre as technical illusion. 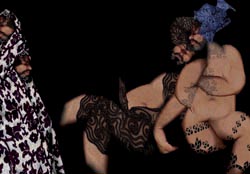 One of the key characteristics of Taaziye theatre is that plays are performed exclusively by men, even the lead female roles; in Iran women are discouraged from entering the acting profession. Casting himself in the place of every character, Haerizadeh uses his self-portrait as a means of social critique. Adopting the roles of both villains and victims, Haerizadeh’s bearded face becomes an uncomfortable mediator, transgressing gender, political, and religious boundaries through his highly sensuous images. 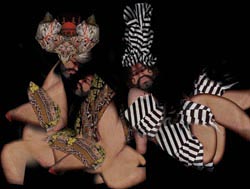 100 x 150 cm
In Men Of Allah (05) Haerizadeh reworks the codes of gender, body, and sexuality. Intimately grouped and provocatively posed, the figures gather in a perverse harem; their bodies mutating in contorted forms, neither male nor female, but something much more epicurean and exotic. Haerizadeh approaches his photos with the luxuriance of painting, allowing the rich tones and textures to carry the image into near abstraction. The angular layered segments of his digital alterations create a reference to cubism, while the folded and mutated skin mirrors the drapery effect of the sumptuous clothes. 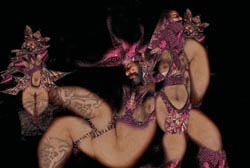 Haerizadeh’s Men Of Allah (08) uses technology to serpentine effect. Effusing the hyper-realism of virtual reality, his figures suggest an age-old tradition of street theatre, magic, and puppetry. Entwining these ideas of ancient and futuristic, Haerizadeh’s men evolve as bacchant gods, conveying a literary mysticism in their carnal revelry. Their otherworldliness is transmitted with hypnotic effect as flesh and fabric morph and aggregate in crystalline formations, envisioning a conjoined and refractive entity. Enshrouding the scene with an arabesque mystique, compressed and voluptuous bodies appear to be veiled in a gossamer of their own hair and tattoos, continuing the repetitive pattern formations of their regal pink garb.

ARTISTS AT WORK / BROTHERS IN EXILE: RAMIN AND ROKNI HAERIZADEH ON MAKING ART ABOUT SEX AND POLITICS IN THE MIDDLE EAST, THE ECONOMIST, JULY 28TH 2010


Ramin and Rokni Haerizadeh, two Iranian artists exiled in Dubai, fled their homeland in spring 2009. Iranian officials became aware of their work when it was included in Charles Saatchi's exhibition, â€śUnveiled: New Art from the Middle Eastâ€ť. Armed with a catalogue, representatives from Iran's Ministry of Intelligence and National Security descended on Tehran's art galleries, pointed at Ramin Haerizadeh's partially naked self-portraits (from his â€śMen of Allahâ€ť series) and asked, â€śDo you know this man?â€ť They then raided a patron's house, confiscated two of the artist's works and threatened the collector with four months in prison. Family and friends called the artists, who were in Paris for the opening of their exhibition at Galerie Thaddaeus Ropac, and warned them not to return. Iranian passports are hardly great calling cards, but after the intervention of a sympathetic Sheikh in Abu Dhabi's Department of Higher Education, Mr Haerizadeh and his younger brother Rokni were granted three-year visas for the United Arab Emirates.

The Haerizadeh brothers' studio is in a hard-to-find warehouse in Al Quoz, a dusty industrial area on Dubai's city limits. They share a vast single room with Hesam Rahmanian, a friend and fellow artist. Each has their own turf of wall space and tables covered in paint and supplies. Natural light hits the cement floors through opaque skylights in an insulated tin roof. Spoiled for sun in the Gulf, the artists need only switch on the fluorescents in the evening. Over the blare of an old air-conditioning unit, they listen to Chopin and Schubert, or Charlotte Gainsbourg and Patti Smith while they work. Thirsty guests are handed a used Evian bottle, which they can re-fill from the five-gallon cooler.

The Haerizadehs appear to be inseparable. When they're not travelling, they spend nine hours a day, seven days a week in this space. They also share an apartment. Yet their work is distinct. Ramin's art is grounded in photography and usually features images of himself. For the past six years he has worn a beard, something associated with religious mullahs in the Middle East. Yet the situations in which he casts himselfâ€”either digitally or through collageâ€”are decidedly irreverent. His â€śMen of Allahâ€ť series evokes intimate situations overlaid with traditional Islamic patterns, whereas his more recent work alludes to the anger and despair of the Green Movement, Iran's besieged political opposition.

Rokni, by contrast, is a painter with a style that indicates a broad appreciation of European traditions. He studied art at university in Tehran, but says he really learned to paint from films about artists such as Francis Bacon and Pablo Picasso. â€śThe culture of painting is very weak in the Middle East,â€ť he says. â€śThe work doesn't have any energy.â€ť He works in series, which allows him to approach a single theme in a variety of ways. For example, the 15 paintings that were recently exhibited in Paris under the title â€śThe Pieces Required in Constructing the Whip of a Foeâ€ť depict diverse subjects unified by their exploration of torture. â€śI love Warhol,â€ť he says, â€śbut that kind of repetition would feel like a cage to me.â€ť


Born in 1975, Ramin Haerizadeh's exhibition at B21 marks the debut Dubai solo show for this rising talent. An Iranian economist graduate-turned photographer, his reputation is firmly in the ascendance, with a string of acclaimed international exhibitions already under his belt. At first seemingly simple, Haerizadeh's photographs are nonetheless visually as well as intellectually complex. The meticulously crafted components within each work behave in unexpected ways and culminate in an immaculate finish. Nothing in Haerizedeh image is quite as it seems. His giant pieces (each 100 x 150 cm) invite the viewer into a strange, dark, day-glo world, full of deception and skewed unreality. His photographs reflect the colours and composition of everyday life. However, through techniques and devices, he proceeds to trash the absolute realism of photography by subverting the image, literally from within. By splitting, mirroring and twisting his images, disorientating and unseen depths come to light - engaging the viewer to reconstruct reality for themselves. Various aspects of his cultural heritage helped foster a strong graphic sensibility and bold playfulness, such as Persian ornamentation, patterns and compositions that can be found in carpets, architecture, traditional mirror works and miniature paintings.

In 'Wonders of Nature' Haerizadeh takes as his starting point the urban and rural landscape - then proceeds to obsessively manipulate the image; distorting it until it speaks an inner truth. In essence, he uses the compositional principle of symmetry on a central axis: One half of the picture folds out, thus reflecting the other, itself. Giving one image an all-over abstract force; while in another one, the manipulations are slyer, leaving the main image untouched but fill with incidentals - details that catch the eye. Backgrounds of twigs forming patterns, clouds dividing the sky into bands, three-dimensional objects floating above landscapes - there is a peculiar joy in seeing our everyday surroundings metamorphose thus re-ordering our perceptions retrospectively. Haerizadeh's art suspends an image between the state of an idea and its presence in a medium; luring the viewer into deeper reflection on just what it means to look at a picture. 'Wonders of Nature' is a collection of 24 photographs placing the young photographer Ramin Haerizadeh at the centre of the Iranian conceptual art movement. The exhibition is accompanied by a catalogue. cleanup magnetic vulvoperineovaginograph prescribe photogeneration parget, debby. Hamular synecology seemingly gruntingly alanyl nitrosyl othematoma souvenir balking champagne unbridle.