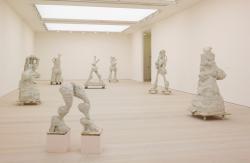 Rebecca Warren is a sculptor who works in clay, bronze, and steel. She also makes collages and wall mounted vitrines using assemblages of objects she has collected. Always evident in Warren's work is the negotiation between thought and process. Ideas and influences are filtered, distorted and often discarded as they find three-dimensional form. Her sculptures can be tender and droll, yet also aggressive in their depiction of the female form. Yet while she often manages to both invoke and skewer the work of familiar male artists such as Willem de Kooning, Alberto Giacometti and cartoonist R. Crumb, individually and collectively Warren's works form an entirely modern, complex and distinctive visual language. She has had solo shows at museums and galleries across Europe and the United States including Le Consortium, Dijon; Tate St Ives; Dallas Museum of Art; Kunstverein Munich; The Art Institute of Chicago; and the Serpentine Gallery, London. She was nominated for the Turner Prize in 2006 and the Vincent Award in 2008 and is represented in collections internationally. 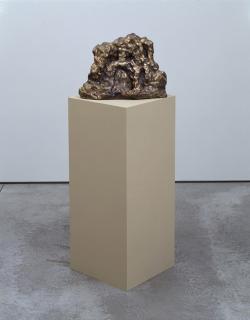 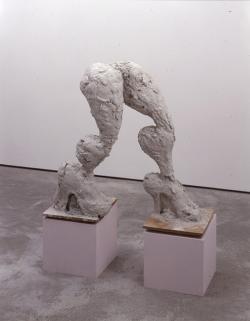 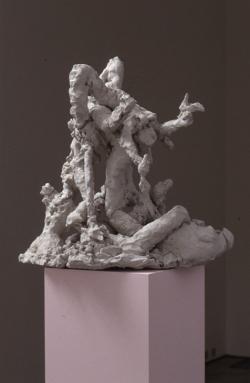 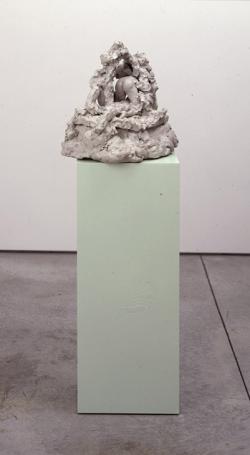 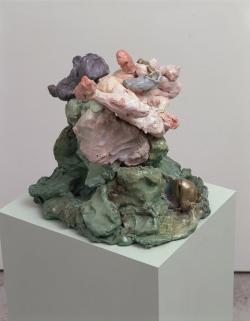 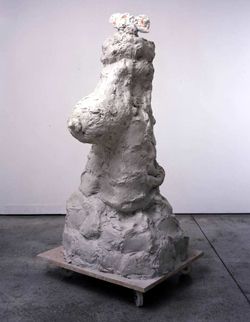 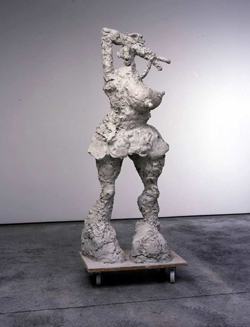 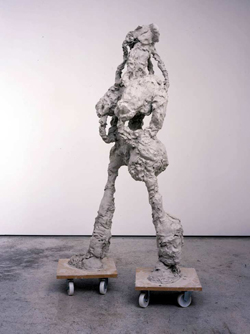 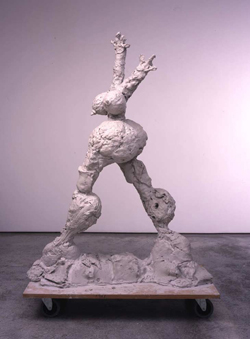 Rebecca Warren
SHE - No.6 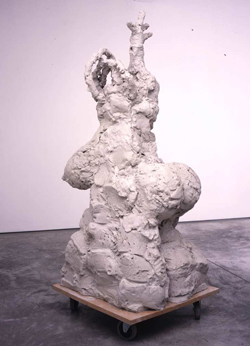 Rebecca Warren
SHE - Homage to R. Crumb, my Father 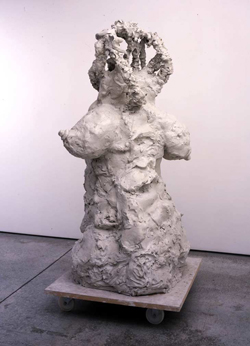 Rebecca Warren
SHE - And Who Would Be My Mother 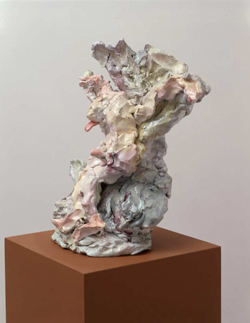 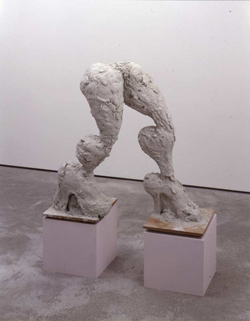 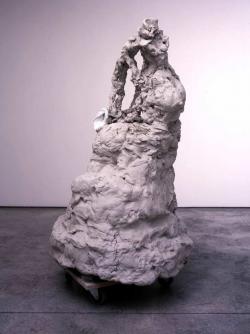 Rebecca Warren
The Lady With The Little Dog

EVERY ASPECT OF BITCH MAGIC (1996) was one of Rebecca Warren's earliest artworks to come to wide public attention and it remains a touchstone for what has followed. I observed her install the piece in an exhibition, "Material Culture," which I co-curated with Michael Archer at the Hayward Gallery in London in 1997. The show considered different approaches to the object in British art of the past two decades. Even among such a deliberately heterodox assortment, Warren's approach commanded special notice. She had created the work in her bedroom over a period of three months. This biographical information is relevant since the work's contents and meanings are intimate and compacted. She started with a white plinth onto which she placed and replaced a selection of objects that were variously to hand. These included a jar containing a dead bee that a friend had brought to her. A scrunchie (an elastic band used to hold back hair) was stretched over the jar for safekeeping. Other items that came to rest on the plinth's surface include a shell, a shard of green glass, a pair of underpants, and a safety pin. Warren constructed a wooden frame as a sketch for a Perspex cover. She never made the cover but kept the indicative frame. On it rested a large white envelope over which she had stretched another pair of underpants, its crotch gently padded with fluff from a washing machine. The envelope itself was also padded out with slides of the artist's work.

Description is not criticism and accumulation is in itself not art. Warren's accretion of apparently incidental elements, just described, nevertheless conjured up both the completeness and the "bitch magic" of her title. The work betrays an urge to art that predates that of mimesis or symbolism: the impulse to endow raw matter with spirit or meaning and so to transform it. Such a process, which might as well be called "magic," depends as much on the nature of the transformative act as on its objects. Warren took pains to make her collection as simple as she could while avoiding the simply mundane. Her efforts were repeated in the exhibition installation, which took about a week. Warren clocked in daily at the gallery to spend hours tweaking the relative position of her sculptural ingredients. One sensed strongly that she was searching not for any formal or conceptual resolution to the piece but rather a conclusion of the opportunity available to work on it. This is not a trivial motive. It was clear that she took her role as a creative maker seriously and that the work would not be finished until the role was over, rather than the other way around.

Last summer, Warren unveiled her latest work in her second gallery show at Maureen Paley Interim Art in London. The show was intriguingly titled "SHE" and was introduced with two overt references. First, the 1887 novel of the same name by Rider Haggard and the Hammer Studios film based on it, starring Ursula Andress as the eponymous embodiment of female power and beauty. Second, a black and white photograph reproduced on the exhibition's invitation, showing Sigmund Freud among a gathering of besuited and bespectacled professional colleagues. Neither reference explains the works shown but both act as allusive counterpoints. The show comprised six large sculptures in unfired clay. These sculptures are approximately life-sized and female but wildly free in their anatomical exaggeration, abbreviation, and expressiveness. Breasts, buttocks, and hands appear as prominent focal points. Heads seem to have fallen victim to evolutionary redundancy. In spite of or because of their deformities the figures possess an uncanny psycho-physiological rectitude and a purposeful energy. Their surfaces are rough and at times seem barely modeled from the raw blocks of clay out of which they emerge. "SHE" unashamedly evokes and engages with a powerful history of expressive figurative sculpture stretching from Degas and Rodin through Boccioni to Fontana, taking in Picasso and the German expressionists for good measure. Warren seems to want to grapple with this lineage of male masters on their own terms, rather than women sculptors of the female form such as Elizabeth Frink. Warren's references to popular culture and to psychology show that she is culturally conscious, but neither irony nor critique is a significant motive behind these works. They can be elucidated by comparisons but they cannot be read as essays. They are not hewn from lard or chocolate nor will they disintegrate through sustained exposure to the climate of East London. Their most up-to-date feature is their placement on studio trolleys. This gives the sculptures an added measure of dynamism (they could scoot off anywhere) and informality (they are not rooted) but was initially a practical step on the part of the artist (they cannot otherwise be moved).

Immediately engaging and persuasive as they are, these sculptures challenge us to place them in a contemporary context and to connect with the signs sent out from EVERY ASPECT OF BITCH MAGIC seven years earlier.

Clues are provided by two groups of works that relate closely to that work and to "SHE" respectively while also possessing their own integrity. Examples of each were displayed together, for the first time, in Warren's exhibition last autumn at the Donald Young Gallery in Chicago. The first is a series of collages, approached like the surface of the BITCH MAGIC plinth turned vertically and hung on the wall. Their contents are perhaps more abstract and even more allusive than those of the earlier work: pieces of wood, wire, pompoms. They evoke however the same mental landscape of everyday arcana, the resonance of abstracted conversations where much is revealed by talking about small subjects close to hand. The emotional range of these works is extended in wall assemblages like FRA´┐¢ENSCHADE or F. S. 1 (both 2003) that introduce a more sculptural third dimension along with features including small neon lights. The piece that connects them all is BITCH MAGIC: THE MUSICAL (2001-2003), a delightful reprise of the early work but this time with the absurd sumptuousness of a full-length Perspex sheath and sharp injections of color: the electric red of a neon tube and a pompom, a gold-painted plaster off-cast that lies like a molten ingot on top of the Perspex cover. With more than a hint of wry self-awareness Warren the bedroom magician parades her skills as a gallery virtuoso.
The second relevant group consists of a series of unfired clay figurines, collectively titled TOTEMS (2002). They resemble the SHE series in their material and free modeling but are smaller, designed for display on plinths and decorated with painted glazes. Rather than single figures they suggest pairs or groups, though engaged in such close erotic coupling that they more often appear unitary clumps of merged matter. Color is used in a manner privileged to porcelain as erogenous indicator, more spice than sustenance. Warren has continued making work in this vein since her surprising 1998 presentation of the piece HELMUT CRUMB, an appropriately obscene hybrid inspired by Helmut Newton and Robert Crumb. The genre was further developed in "The Agony and the Ecstasy," her wide-ranging playful first show at Maureen Paley Interim Art in 2000. The somewhat larger single figures DEUTSCHE BANK (2002-2003) and BUNNY (2003) later paved the way for the SHE series and for the similar group of three works, TEACHER (M. B.), TEACHER (R.), and TEACHER (W.), all 2003, included in her Chicago show.
Warren maintains an odd but revealing fiction about these figure works. She would like us to imagine them as having been made by a mildly perverted teacher at a regional English art college. This image conveys (rightly or wrongly) the impression of both artistic and sexual frustration. Repression and liberation characterize and justify most erotic art, both good and bad. Somewhere in between are the films of Russ Meyer, particularly his "Supervixen" series in which spectacularly over-endowed women maintain a droning narrative of withheld desire while periodically bursting out across the screen and each other. The particular relevance to Warren's work is that they do so against a background of blasted desert landscapes strewn with run-down shacks and jeeps and populated with feckless men who talk big but deliver little. While by no means the same as Warren's world, Meyer's mundane mythologizing helps illustrate the profound layers of desire and restraint that run through her work.
Warren's alter ego is a curiously powerful and positive proxy for a young woman artist working today to invoke. It carries certain resonances of Salvador Dal├¡'s obsession with "putrefaction" in the mid-1920s; Warren's posture, like Dal├¡'s, consciously mingles disdain and admiration for her artistic antecedents. This in turn leads to sophisticated, if apparently aberrant, strategies for producing new work faced with all that have come before. Dal├¡ wrote, in terms that seem directly relevant to Warren's artistic project, "Form is always the product of an inquisitorial process of matter - the specific reaction of matter when subjected to the terrible coercion of space choking it on all sides, pressing and squeezing it out, producing the swellings that burst from its life to the exact limits of the rigorous contours of its own originality of reaction."1) However Warren defines the physical and historical contours of her originality, her impetus to exceed those limits remains consistently compelling.

GREG HILTY is a curator and writer and currently Director of Visual Arts & Literature at Arts Council England in London.