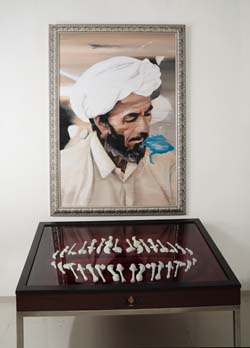 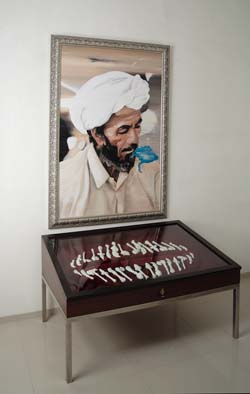 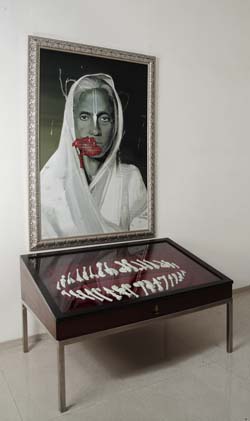 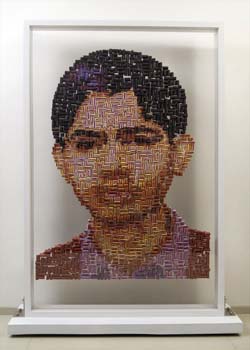 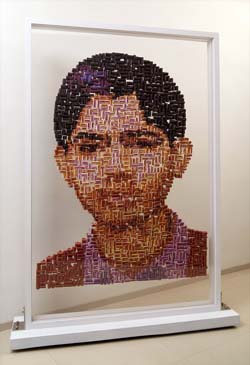 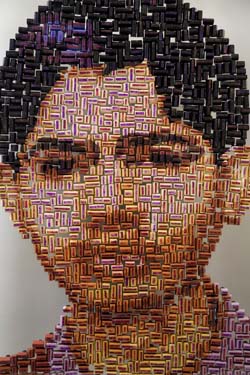 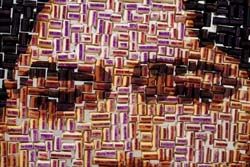 The work stands like a screen, holding up a portrait formed by several hundred names of people, rendered in scripts of over 14 Indian languages. From a distance they come together as a portrait, but up-close they almost seem like a circuit-board of rubberstamps. The rubberstamps are made with names of those officially registered as having gone missing in India from different geographical zones. These include the names of those lost through natural calamities such as landslides, floods and earthquakes, the names of those who have gone missing during riots or large scale mishaps and the names of those abducted or absconding, with the police still trying to ascertain their whereabouts. These are people who seem to have slipped out of the radar of human communication, who have been thrown off the social safety net. The portrait of a sub-continental citizen is formed by numerous such names; the back of the portrait emerges as a sea of invisible identities, a bird’s eye view of a large human congregation.


Reena Saini Kallat's recent paintings draw on the crises that we have come to accept as normal features of everyday life. NANCY ADAJANIA interprets these new forms and images.

THE mediatic image is like a siren: it dies even as it raises an alarm. The central problem facing painters who employ mediatic images in their art, therefore, is: How do you resurrect an image that has such a brief half-life, how do you render significant an image that holds the attention for not more than the blink of an eye? In an economy of images that has reduced every human being to a banal cipher, how can the artist return a sense of significance and dignity to the human subject, re-connecting the image-fragmented individual to the larger texts of the contemporary? In her recent work, on exhibition currently at Mumbai's Gallery Chemould, Reena Saini Kallat embeds these questions in portrait-narratives that function between the realms of ceremonial time and the accidents of history.

From the flux of mediatic ephemera, Reena extracts images of anonymous people belonging to varied social milieux and political contexts; she invests them with symbolic resonance by the apparently simple act of selection and isolation, with the specificities of their loci cropped away. I would say that Reena's figures are neither recognisable individuals (in the sense that we cannot name them, even when we identify their locale from internal evidence) nor are they simply identitarian stereotypes (in that, although they are coded with national, religious or ethnic characteristics, the pictorial emphasis is on their human vulnerability, as people going about their lives, rather than as incarnations of Identity). In Reena's treatment, these anonymous people become portraits residing in an unstable semiotic space intermediate between individual and type: she is thus able to employ them as markers of everyday heroism.

The faces that stare at us from Reena's columns are those of ordinary people, archived from the random memory of a computer: a Kashmiri woman in a festive dress, a street-child whose face wears an anxiety of lack, a man in characteristically African Muslim head-gear, an anaemic migrant labourer, a taxi- or a rickshaw-driver, or perhaps one of the unemployed millions. We are comforted by their familiar presence, we meet them daily in newspapers, on the TV screen, or on the Net. They may come across as stereotypes at first glance, but the vulnerability of their situation summons from us an empathy that gives them a dimension of reality. For, as the viewing eye travels below the portrait, it encounters a circus of mythic demons, flashing swords and lotus-chakras.


Reena Saini Kallat's series of paintings, recently exhibited at the Sakshi Gallery, Bangalore, can be interpreted as a conversation between the visualities of fate and faith. But as an artist, her primary concern is in the status of the symbol in a charged political environment, says NANCY ADAJANIA.

TRAINED as a painter, the young Bombay-based artist Reena Saini comfortably straddles the worlds of painting, installation and public art. One of her major concerns is the way in which the symbolic economy of hopes, wishes, aspirations and desires is manufactured and disseminated in Indian public culture, in an ongoing play between what individuals want and what institutions or their socially programmed destinies allow them. In an unfolding body of installations, for instance, she has morphed a sand-filled uterus into an ocean of desires, while using dismembered wax body-parts as reminders of the lack that afflicts the body politic. Moving between the intimacy of the body and the public nature of political space, Saini's art-works act as sites where disease and benediction, trauma and grace compete for dominance.

Following from this, I would interpret Saini's recent series of paintings, which was exhibited at the Sakshi Gallery, Bangalore, till yesterday, as a conversation between the visualities of fate and faith. The tension between these two interrelated concepts has been dramatised most strongly in the Indian public sphere after independence. From the 1950s through the 1980s, the citizens of post-colonial India harboured the hope that they could erase the lines of fate (inheritance by birth, caste, religion and regional location) and replace them with the power of faith in the secular icons of Progress, Technology and the Nation-state. However, by the 1990s, various political and economic upheavals produced a new political configuration, under which this secular faith was eroded and substituted with a fate determined by religion and ethnicity, and articulated through processes of exclusion and discrimination.

Two visual tropes, those of the hand and the flag, recur in Saini's works. The hand appears both as a delta of fate-lines as well as an instrument of labour that could overcome those lines. The tricolour is portrayed as a mnemonic of the country, which once stood for sacrifice, peace and fertility, and also as a country today fragmented by divisive political and religious forces. In the paintings, the flag assumes various forms, floating across and tri-colouring a range of symbolic objects that stand for the country. It hues a diseased branch operated on a surgeon's table, dyes a nation-tree thirsting for water, and tints the landscape across which a dhobi carries his bundle of soiled clothes.


We have our own space to define what we are doing ďż˝ so thereďż˝s no room for jealousy if the other one is doing better. In fact, it's a matter of pride.

"I'm noisy and messy, while she is organised and calm. From time to time, my hyperactivity gets to her and she politely smiles and shuts the door." - Jitish Kallat

Darlings of the art and media circle, their youthful exuberance belies the maturity of their social and political concerns. Unafraid to take a stance, their collaborations make a telling impact on society. Spirited painters both, husband and wife, Jitish and Reena Kallat speak about their different strokes and colourful coexistence to MARIA LOUIS.

They have grown together as students on an artistic journey, spent the last decade of their lives sharing their thoughts and emotions, crossed the oceans together in pursuit of their dreams and lived as man and wife for the past four years. He is an artist who is a talented writer, she is an artist who is a trained dancerďż˝and the choreography of their lives is synchronised with the rhythm of their hearts. They work hardďż˝but party equally hard. They are the darlings of the art and media circle in the city of Mumbai, where their artistic collaborations have made a telling impact ďż˝ most recently visible in the 15ft x 59ft billboard mural of the Colour Ghoda exhibited in the Kala Ghoda precinct. Meet Jitish and Reena Saini Kallat, young artists who live together, sometimes work togetherďż˝ and always look good together!

I observe them at Velvet Lounge, the new discotheque designed by Reenaďż˝s architect brother, Rajiv Saini, at the Renaissance, Powai. For a minute, they appear drained from working against the clock towards new local and international exhibitions and sit down to nurse their drinks. Then suddenly, Jitish perks up and leads Reena on to the dance floor. Her face brightens and she willingly follows him. Uninhibitedly, they sway and move to the pulsating beat ďż˝ a rarity among the city's normally restrained breed of artists. But these are youngsters on the threshold of turning 30ďż˝and their youthful exuberance belies the maturity of their social and political concerns.