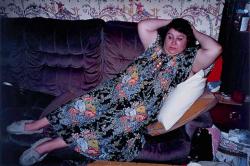 "The pictures shown here are of my father Raymond (born 1931): my mother Elisabeth (born 1950) and my brother Jason (born 1977). Ray is a chronic alcoholic and has drunk for as long as I can remember. He has not worked since he was mode redundant from his job as a machinist around 1980. Liz very rarely drinks but she does smoke a lot of cigarettes. My younger brother still does not seem to know what he wants: he gets a job for or week or two and then leaves it. I think he is very lazy." 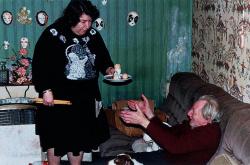 "I started using a camera about six years ago. I felt I needed some kind of reference material for my paintings as it is quite difficult to get people to give their time to pose for you. I was still living with my dad at the time. Ray stopped in his room almost constantly drinking and sleeping. If he went outside he become ill. He drank to get to sleep. He had a friend from a neighbouring towerblock -himself an alcoholic -  who came around to make strong home-brew for him. This was much cheaper than 'buying' alcohol and meant that Ray didn't have to venture outside to the off-licence. He kept the home-brew bucket by the side of his bed for convenience and drank from a plastic jug that he would dip into the brew. It tasted as bad as it looked but it must hove nourished him somehow because he otherwise never ate. Liz wasn't living with us then: she had left due to Roy's incessant drinking and moaning. She seldom visited." 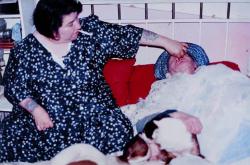 "This was all quite sad and I wanted to make paintings about it that were very moving: that would express the tragedy of it all. When I printed up those photographs (I worked in black-and-white then because it was cheaper than colour) I was apprehensive about letting on to anybody about who they were of for fear of becoming unpopular with the other students who were, I believe, all from much more financially and spiritually secure family backgrounds. I was fairly introvert as a teenager because I had always been somewhat embarrassed about the state of my family. Yet after a few months at college I realised that by letting students and, especially, tutors know who the paintings and photographs were really of I could come clean about the family history and hence relate to people naturally. This was quite a load off me and since then I think l've been taking pictures of my close family not just as reference for paintings but also as on attempt to comprehend myself and them more fully." 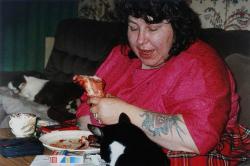 "I have done very little painting since graduating partly because of a lack of funds for studio space and partly because I has a supermarket job stacking shelves. Instead, I worked on the book 'Ray's a Laugh’ which was published in April. My parents and brother are very happy with the book. Neither I nor they ore shocked by its directness because we're all well-enough acquainted with having to live with poverty. After all, there are millions of other people in Britain living similarly…" 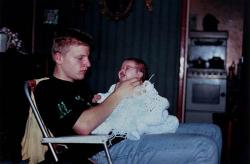 "It is certainly not my intention to shock, to offend, sensationalise, be political or whatever. Only to make work that is as spiritually meaningful as I can make it. Whatever the medium.” 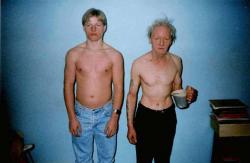 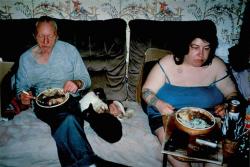 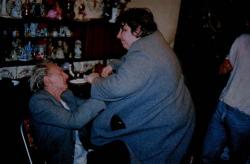 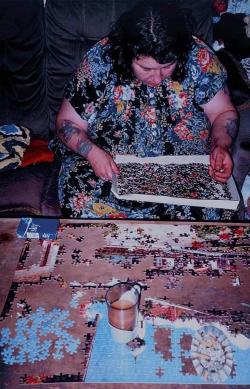 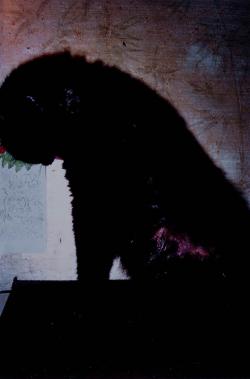 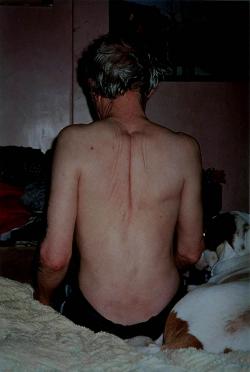 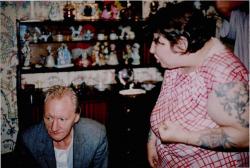 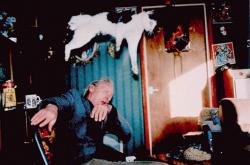 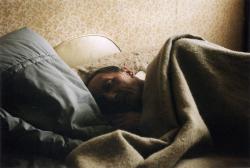 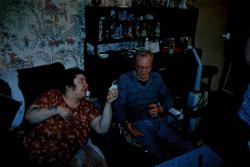 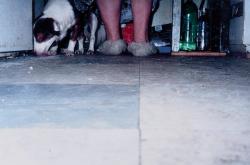 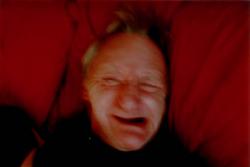 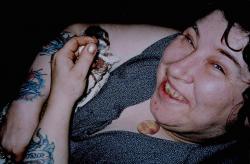 
'I was just trying to make order out of chaos,' said the would-be painter Richard Billingham of his reasons for photographing his dysfunctional family back in the 1990s; in fact, he was looking for models for his paintings, and his alcoholic father Ray and obese mother Liz wouldn't sit still long enough, so he picked up a camera. What could be more orderly than a model flattened to two dimensions, utterly acquiescent, never moving from position, or getting tired or cross? And what could be less representative of the people he was trying to paint? At some point, Billingham must have realised that chaos is only amenable to a certain amount of rehabilitation, and started concentrating on those garish, oddly beautiful photographs instead.

The result was the disorder we call fame - a spot in Saatchi's 1997 'Sensation' exhibition, awards for 'Ray's a Laugh', his book on his family, a place on the 2001 Turner shortlist, acclaim and adulation. Billingham has not chosen to point his camera at this kind of chaos; maybe it's too big for his viewfinder. But there's a certain logic in the move from photographing the inmates of that council flat to picturing the inhabitants of zoos, as he has done most recently (in film and video).

There are a couple of those shots in this exhibition, and they ought to sit oddly with the images of family life that surround them, but they don't, even though this new ensemble of Billinghams is rather less feral than the old one. The colours are quieter, the shock value muted, but the fact that Billingham appears to have constructed a family far removed from the one he grew up in - middle-class home with polished floorboards and appliances, neat attentive wife, baby son with no more to cry about than most infants - doesn't lessen the unease. With the animal shots - the polar bear, the jaguar - we sense the cage even, or especially, when we can't see it: it's hard to escape the conclusion that Billingham, the son of a man who dislikes leaving the house, is so aware of the restrictions on urban humanity that they seep into every family composition, however ostensibly calm.


Richard Billingham didnâ€™t have to journey far to find fame â€“ he found it at home when he trained his camera on his mum and dad in their council flat in Cradley Heath, leading to a series of startling photographs that secured him a place in the now-legendary Royal Academy show, Sensation. Billingham went on to spend the better part of the last decade travelling the globe in search of subjects. From the lush landscape of Ethiopia to a dirt road in Pakistan, he has photographed the world with the same haunting yet revelatory gaze that first shot him to fame in 1997 and ultimately won him the Citibank Photography Prize that same year. As a new exhibition of his work opens at Castlefield Gallery (a group show that also includes Mark Wallinger), Jessica Lack talks to the artist about John Berger, zoos and the animal eye

JL: The group exhibition at Castlefield will be showing a video of a leopard from a series of photographs and videos you made of animals in captivity. What was the inspiration behind the series?

RB: My mother taking me to Dudley Zoo as a child. She would take me about once a year and some of the pictures of me as a kid are taken in Dudley Zoo.

JL: You have said the work was informed by John Bergerâ€™s essay Why Look At Animals? What was it that interested you in it?

RB: I came across Bergerâ€™s essay browsing in the library when a student. I liked the way he talked about the â€˜eye of the animalâ€™. Well, thatâ€™s how I remember it. I found it very moving somehow. It also convinced me I would like to make some work with zoo animals one day.

JL: You journeyed all over the world for two years to make the series. What was the most unusual aspect of your travels?

RB: Talking to some of the zoo visitors. It slowly dawned on me that there are certain people that will visit their local zoo every day as they have a particular relationship to a certain animal. By talking to these people, I found out useful information about zoo animals that helped me make the work. For instance, I was in Copenhagen zoo trying to film a tapir. It had adopted a strange head bobbing movement that it repeated by the glass of the pen (where you view it). But each time I filmed the animal the footage did not seem intense enough for me to do anything with.
That night I went to a pub, still thinking about how, when I returned the next morning, I could film it better. Later, a woman started talking to me. She seemed a bit mad. She asked me what Iâ€™d been doing that day so I said Iâ€™d been â€˜â€¦filming the tapir in the zooâ€™. That should get rid of her, I thought. But then she smiled and said that for the past five years she had been drawing the same tapir each day! She told me everything she knew about it, in particular that its eye was quite special in that just before it would blink a separate eyelid, underneath the eyelid you can see, would blink. Itâ€™s hard to explain but you can see it sort of blinks twice in the video.
With this new knowledge, I decided the next day to concentrate filming on the animalâ€™s eye only and this time the footage looked much better, less contrived. After that I always talked to zoo visitors that were regulars as they had all sorts of interesting facts and local knowledge about their favourite animals.

JL: Many of the images appear theatrical â€“ the design of the enclosure, the lighting and the repetitive actions of the animals give it a sense of unreality, as if the animals are detached somehow from time and space.

RB: I guess many of the images do have a theatrical element. Iâ€™m not sure what you mean about the animals being â€˜detached from time and spaceâ€™. When I was filming and photographing I was often looking for ways to visually integrate them with their spaces. I wanted the animals to have dignity and not look marginalised or pathetic. In most of the photos and videos the animals do not hang around the margins of the enclosures but are often in the middle of them. They are also often centrally â€˜placedâ€™ within the photos or videos. I think they are visually quite entrenched in their enclosures.