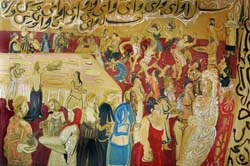 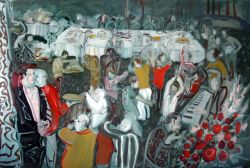 Rokni Haerizadeh uses painting as a means to critique the hypocritical aspects of his culture. Haerizadeh’s Typical Iranian Wedding ironically describes the rigmarole of getting hitched, Persian style. Presented as a mammoth diptych, men and women are physically separated into two panels, which when coupled form a grand hall divided by a curtain. On the men’s side guests carouse with abandon amongst over-flowing buffet tables, live music, and lush flower decorations; while the ladies’ is a much more Spartan affair. Aside from the grotesquerie fashion show of primped up wives and girlfriends, there’s only one measly turkey and the lights are left on so as not encourage excessive party spirit. Haerizadeh rendersthese scenes with a satirist’s relish, considering every detail as a deliciously cruel and too accurate caricature. 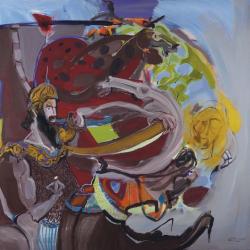 200 x 200 cm
This paintingâ€™s title, Razm, is the Farsi word for fighting: considered in epic poetry, along with love, to be one of the two great heroic activities. Haerizadeh often takes inspiration from Persiaâ€™s rich literature â€“ such as Ferdowskiâ€™s The Book of Kings or Rumiâ€™s poetry and prose works â€“ using its grand themes as allegories for contemporary Iranian social issues. In Iranian custom, rather than having a war, one soldier from each side was selected to partake in a duel to the death as a means to settle disagreements. Haerizadeh paints this scene with all the energy of a heated battle. On the left of the canvas, the protagonist strides his horse with masculine nonchalance, holding a diamond ring, his damselâ€™s prize. Smiting his enemy with a single blow, the right side of the canvas descends into violent abstraction, the fallen rider rendered in a cacophony of blurs and patterning, delineated by faint skeletal gestures and heavy cartoon outlines. 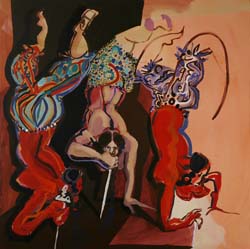 200 x 200 cm
Dancing with swords is a traditional custom throughout the Arab world, usually performed by women as part of a wedding ceremony. Haerizadeh delivers this scene with the vivid exoticism of Matisse or Gauguin, his bold colours, heavy outlines, and opulent patterning re-appropriating the tradition of ‘orientalism’. Haerizadeh uses this association with extrinsic idealisation to envision a burlesque parody of the morality of women: his acrobatic belly dancers, chained to the stage, have transformed into a nefariously devious troupe. In conventional ritual the sword represents the honour of the husband, which the girl on the right has ‘accidentally’ dropped. 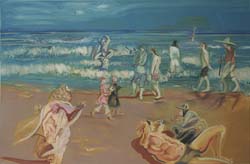 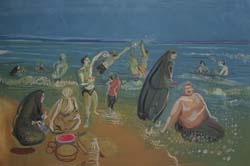 200 x 300 cm (each panel)
200 x 600 cm (overall)
Humorously reminiscent of Eric Fischlâ€™s paintings of nudes on beaches, Haerizadehâ€™s portrayal of life on the Iranian seaside falls woefully short of good-fun naturalism. Rendered as a diptych, Shomal (Beach At The Caspian) highlights the inequalities of the sexes, comically exaggerating the inadequacies of dress code. As the men frolic alfresco in the surf and sun, the women stroll lazily in full overcoats or continue their domestic duties serving picnics in black burkas.
Haerizadeh executes this scene with the leisure of daydream, his fluid gestures and frothy brush marks capturing the sun-bleached languor of holiday idle. 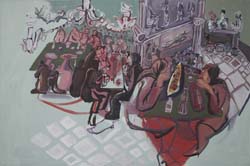 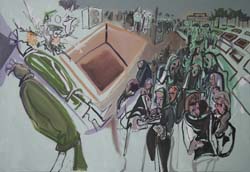 Iranian funerals are elaborate affairs, often lasting several days and incorporating a multitude of ceremonies which extend from the highly staged to the deeply private. Haerizadeh’s Typical Iranian Funeral illustrates the contrast in these varied approaches to bereavement. In the canvas on the left, a meal is shared between the deceased close family and friends, a gathering of the nearest and dearest tellingly structured around divisive table arrangements. The civility of this custom is juxtaposed to an image of public ritual, with bodies on full display, grieved over by mourners-for-hire and strangers, as rites are proclaimed over graveside loudspeakers. In
observing the paradoxes of everyday life, Haerizadeh creates a provocative and sympathetic portrayal of a society that’s fundamentally flawed, and infinitely endearing and relatable.

ARTISTS AT WORK / BROTHERS IN EXILE: RAMIN AND ROKNI HAERIZADEH ON MAKING ART ABOUT SEX AND POLITICS IN THE MIDDLE EAST, THE ECONOMIST, JULY 28TH 2010


Ramin and Rokni Haerizadeh, two Iranian artists exiled in Dubai, fled their homeland in spring 2009. Iranian officials became aware of their work when it was included in Charles Saatchi's exhibition, â€śUnveiled: New Art from the Middle Eastâ€ť. Armed with a catalogue, representatives from Iran's Ministry of Intelligence and National Security descended on Tehran's art galleries, pointed at Ramin Haerizadeh's partially naked self-portraits (from his â€śMen of Allahâ€ť series) and asked, â€śDo you know this man?â€ť They then raided a patron's house, confiscated two of the artist's works and threatened the collector with four months in prison. Family and friends called the artists, who were in Paris for the opening of their exhibition at Galerie Thaddaeus Ropac, and warned them not to return. Iranian passports are hardly great calling cards, but after the intervention of a sympathetic Sheikh in Abu Dhabi's Department of Higher Education, Mr Haerizadeh and his younger brother Rokni were granted three-year visas for the United Arab Emirates.

The Haerizadeh brothers' studio is in a hard-to-find warehouse in Al Quoz, a dusty industrial area on Dubai's city limits. They share a vast single room with Hesam Rahmanian, a friend and fellow artist. Each has their own turf of wall space and tables covered in paint and supplies. Natural light hits the cement floors through opaque skylights in an insulated tin roof. Spoiled for sun in the Gulf, the artists need only switch on the fluorescents in the evening. Over the blare of an old air-conditioning unit, they listen to Chopin and Schubert, or Charlotte Gainsbourg and Patti Smith while they work. Thirsty guests are handed a used Evian bottle, which they can re-fill from the five-gallon cooler.

The Haerizadehs appear to be inseparable. When they're not travelling, they spend nine hours a day, seven days a week in this space. They also share an apartment. Yet their work is distinct. Ramin's art is grounded in photography and usually features images of himself. For the past six years he has worn a beard, something associated with religious mullahs in the Middle East. Yet the situations in which he casts himselfâ€”either digitally or through collageâ€”are decidedly irreverent. His â€śMen of Allahâ€ť series evokes intimate situations overlaid with traditional Islamic patterns, whereas his more recent work alludes to the anger and despair of the Green Movement, Iran's besieged political opposition.

Rokni, by contrast, is a painter with a style that indicates a broad appreciation of European traditions. He studied art at university in Tehran, but says he really learned to paint from films about artists such as Francis Bacon and Pablo Picasso. â€śThe culture of painting is very weak in the Middle East,â€ť he says. â€śThe work doesn't have any energy.â€ť He works in series, which allows him to approach a single theme in a variety of ways. For example, the 15 paintings that were recently exhibited in Paris under the title â€śThe Pieces Required in Constructing the Whip of a Foeâ€ť depict diverse subjects unified by their exploration of torture. â€śI love Warhol,â€ť he says, â€śbut that kind of repetition would feel like a cage to me.â€ť