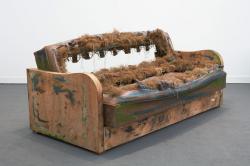 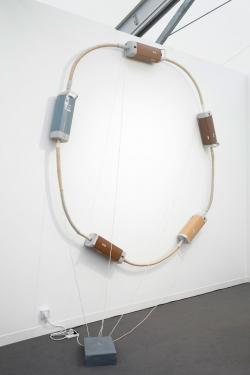 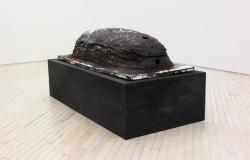 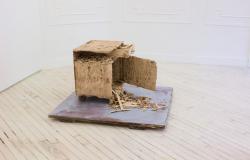 Roman Stanczak
From 2nd to 3rd

HE DAILY PIC (#1418): For at least a century, art has had a fascination with objects that are distressed, cast-off, time-worn. The look of real flotsam is at the root of the ragged line, the fractured form, the peeling surface that have become our worst expressionist clich├®s. What intrigues me about this cabinet by Polish artist Roman Sta┼äczak, now in a show of two Warsaw sculptors at Bureau gallery in New York, is that it makes its expressionist artifice perfectly evident.
You can tell that the cupboard started life, no doubt fairly recently, as a normally slick store-bought object. It wasn't time or ill-use, or the hazards of fate, that reduced it to its final match-stick state. It was an artist willfully having a go at it in a workshop. Expressionism ŌĆō an especially strong tradition in Poland ŌĆō normally comes wrapped up in sentiment. In my reading of Sta┼äczak's piece, its trademark devices become evidence of a cold-hearted artistic process, no more inherently ŌĆ£expressive" than any other act of carpentry.

ŌĆśI donŌĆÖt believe in rare phenomena, in people experiencing odd, unusual states, that others are not given to feel [ŌĆ”] I chose the medium of everyday objects, present in many homesŌĆÖ. So said Roman Sta┼äczak, in 1994, in one of the few interviews he has given over the last two decades. A peer of Pawe┼é Althamer and Artur ┼╗mijewski, fellow graduates of Grzegorz KowalskiŌĆÖs studio at the Sculpture Department of the Warsaw Academy, Sta┼äczak made his debut in the early 1990s with a series of powerful sculptures investigating the materiality of quotidian objects. Shortly after, he dropped off the radar, resurfacing only sporadically. ŌĆśOne Among a BillionŌĆÖ at WarsawŌĆÖs Galeria Stereo marked his return to the art scene.
Sitting in the middle of the room, covered in fine sawdust and shavings, was a large wooden object (Untitled, 2014), which had once been an elegant single bed with a sideboard at its head. Stripped of varnish and ripped open, it now resembled an otherworldly bunk ŌĆō one that was not so much filed down as whittled anew. This is Sta┼äczakŌĆÖs trademark treatment of commonplace items; his earlier works include a chair, a sofa and a bath, all mangled ŌĆō turned inside-out, as it were ŌĆō using chisel and mallet or hammer. His practice, marked by perseverance as well as intensity and violence, gestures towards the very essence of things that, although rendered useless, retain a haunting sense of familiarity. Here, tucked away inside the bedŌĆÖs cabinet, was a small female figurine, seemingly forgotten by the previous owner. Reminiscent of Catholic representations of St. Barbara, it wielded a model of New YorkŌĆÖs Empire State Building. This miniature sculpture, made by the artist during a recent stay in the US, offered a stark contrast to the coarse look of the furniture and pointed to another characteristic feature of his work: references to religion, often as incongruous as his handling of objects.
Mounted on a nearby wall was an odd trophy (Untitled, 2014) ŌĆō a single elaborate antler projecting from a round metal base. On closer inspection, it turned out to be the branch of a tree with two animals painted on the orb, itself fashioned from an old kettle. This was a trophy indeed, one found by the artistŌĆÖs dogs during a walk in the woods, and it was with images of them that he had adorned the base. Offhand and seemingly reliant on chance, Sta┼äczakŌĆÖs approach is in fact grounded in a very deliberate interaction with the world; the objects in his works are seldom simply found ŌĆō rather, they are selected, or gifted.
Arithmetic of Platonic Love (1994/2014), shown in the galleryŌĆÖs other room, was a remake of Sta┼äczakŌĆÖs diploma project. Consisting of a video and an object, the installation is an account of a curious episode. While still a student at the Academy, the artist received a peculiar offering: a plastic bag filled with several hundred pairs of used womenŌĆÖs legwear, amassed for over a decade by one of his former friends. In the eight-minute VHS footage, we witness Sta┼äczak as he puts the on the tights, stockings and socks, the accruing layers hindering his movement and, eventually, making it difficult for him to breathe. At one point in this captivating, though grotesque, spectacle, he is joined by a man who helps him remove the layers, which form bulging, organic shapes. The resulting objects are part of a sculpture presented alongside the video. Displayed on a steel rack, these lumps of nylon have little to do with apparel, much less eroticism, testifying only to the bizarre fascination of their collector.
It is not that Sta┼äczakŌĆÖs new work returns to where he left off but rather that his whole practice is rooted in acts of obsessive repetition. Take his 1996 installation, Untitled, at WarsawŌĆÖs Centre for Contemporary Art, in which five antiquated vacuum cleaners, connected in a closed circuit on the wall, incessantly pumped air between them. Rather than describing the artist himself, the ŌĆśOne Among a BillionŌĆÖ of the shows title referred to these acts of compulsive repetition that push the ordinary to the point of absurdity.

Bureau is pleased to announce our exhibition opening the fall season: Feet, 4 Walls & Head, a collaboration with Galeria Stereo from Warsaw Poland. This two-person exhibition features Gizela Mickiewicz and Roman Sta┼äczak, sculptors from two different generations in Warsaw, both working with everyday objects and materials. Their works converge at points of material transformation. Mickiewicz focuses on the metaphysical potential of sculpture while Sta┼äczakŌĆÖs work is exceptionally physical, bending objects to his intense spiritual will.

Imagine a simple drawing of a human body and a space at one time. Feet, four walls and head. A sculpture. It would also be a representation of an inner space understood as a place of intellectual and emotional events, where walking and thinking mean basically the same ŌĆō a passage from one thought to another, through the chaos.

Gizela Mickiewicz and Roman Sta┼äczak both rework these kind of inner walks and shape them into sculptural forms. These forms derive from everyday experiences and are built of common materials and objects such as glass, sand, cement, steel, mirror, an iron, a bathtub, a cupboard. While the material world is the matter, the works refer to the body and the self and space. ŌĆ£My sculptures speak about life, however, not among objects but among spiritsŌĆØ, says Sta┼äczak. His works are usually made out of distorted objects, and his practice is based on obsessive repetition of a sculpting gesture, extended until the ordinary object absorbs the energy dedicated to it and is transformed. Mickiewicz recently realized a series of sculptural works that illustrate complex mental states. Shapes, textures and weight of matter, as well as relations between objects create messages reflecting the emotional tensions and subtleties specific to internal states. Therefore a state not easily expressed in words finds its material representation, physically embodied.

Gizela Mickiewicz (b. 1984) and Roman Sta┼äczak (b. 1969) are Warsaw-based sculptors born a generation apart, whose work shares a brutalist appeal. The show, co-organized by the Polish capital's Galeria Stereo, is weighty in every sense. Both artists handle materials like steel, concrete and glass with a certain matter-of-factness, but close looking also reveals flashes of elegant wit and even suggestions of profound spiritual insight. Mickiewicz creates subtle poetry from deceptively simple juxtapositions; one striking work, Total of All Distractions (2015), features a mesh sail suspended on thin metal poles that project from a cylindrical glass base. The veteran Sta┼äczak's sculptures take time to view and appear to have taken eons to make. In Misquic II (2014), an overturned bathtub appears to have been coated with layers of metal, a process evoking the labor of meditation and ritual.
Pictured: Roman Sta┼äczak: From 2nd to 3rd, 2015, wooden cupboard and wood chips, 22┬Š by 38 by 39┬╝ inches. Courtesy Bureau, New York and Galeria Stereo, Warsaw.