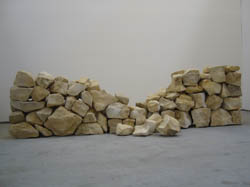 Rupert Norfolk’s works require curiosity and an investment of time to be fully appreciated. His subtle manipulations of materials and objects aren’t often immediately apparent. Wall, for example, is a simple dilapidated dry stone wall, seemingly removed from site and placed in the gallery. On closer inspection, however, this is no ordinary ruin. Its limestone rocks are symmetrical in shape, one side of each rock having been chiselled to mirror the hollows, marks and protrusions naturally formed on its opposite side. Incorporated into a wall, the stones, with their mimetic interventions, introduce a discreet artifice and an uncanny tension. 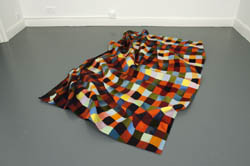 Pixelweave is a colourfully checkered Aubusson tapestry made with traditional techniques and exhibited on the floor with its thick fabric arranged in undulations. It becomes apparent that while some of these folds are real, others are the illusory effects of shifts in tone and distortions in pattern, which have been integrated into its design. Pixelweave is both a rumpled woven fabric and a woven image of the same rumpled fabric, where fictional folds coincide and are at odds with those extending in space. 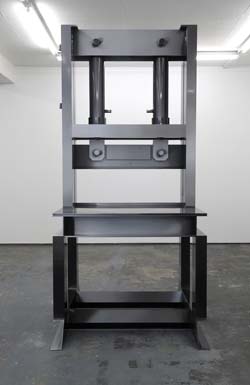 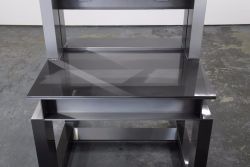 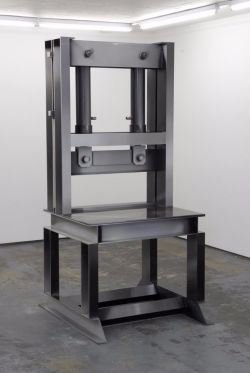 Acrylic paint and lacquer on aluminium

Guillotine is a replica of an industrial machine, transposed into spray-painted aluminium. Its airbrushed surface simulates and exaggerates the shades and reflections caused by its own structure under contrived lighting conditions. Not quite corresponding with the real highlights and shadows, this treatment has a contradictory and disquieting effect, at once compounding the physical presence of this overbearing apparatus and at the same time rendering it with a strangely indeterminate graphic quality.

RESTLESS ORDER
An Essay on Rupert Norfolk by Peter Kapos

Once all the world was like America' 1, said John Locke, who took the Americas of his day as concrete proof of the historical reality of the state of nature. In his mind the continent exhibited itself as a living scene of origin, specifically England's, and a splendid mine of possibility: vivid, vast and eminently material. In Rupert Norfolk's pencil drawing Foliage that projection of Locke's colonial enthusiasm, it seems, has passed through the mangle of three centuries' landscape painting and returned, by way of Henri Rousseau, drained of colour and promise, quite flattened out.

Foliage's shallow dimensions are dense with a contrived chaos of fauna, seemingly arranged, for no one's benefit in particular, in a lacklustre demonstration of botanical diversity. At its centre are lodged a pair of porcine eyes. The scene is precarious, every element threatened with assimilation to a single, tortuously convoluted and indefinitely extended surface. Utterly dominated by its surroundings, the pig seems unable to distinguish itself as a coherent figure from an environment with which it is woefully continuous. Whilst that environment, asserting the concrete particularity of its many and varied moments, in a gross overstatement of the case, has brought its world to the threshold of abstraction.