182.9 x 457.2 cm
Drawing from his background in the design industry, Ryan McGinness‚Äôs work resolves the clinical graphic aesthetics of media as vast, contemplative fields of intimate meditation. Under Five Chairs Psychiatrists Wink is set across three panels, each beaconing with a baroque entrancement. Woven together with delicate intricacy, McGinness‚Äôs forms converge in a kaleidoscope of free-flowing associations: Stylised motifs, calligraphic patterns, and abstracted tattoo-like insignia overlap in arabesque mandalas. Framed within rich black and red planes, McGinness‚Äôs painting is reminiscent of ancient tapestries, fabricating the iconography of contemporary experience as spiritual and timeless. 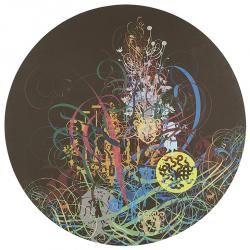 Partaking in mark-making as a timeless form of communication, McGinness‚Äôs process of painting is devoid of the artist‚Äôs exclusive gesture. His ultra-smooth surfaces are embellished through veneers of spray paint and silk-screen, coining seamlessly manufactured fields free from personal contact. Although he replicates styles and designs that seem innately familiar, McGinness‚Äôs iconography is entirely his own. Effecting a ‚Äòcopy‚Äô for which there is no original, McGinness presents a system of signs and signifiers that are infinitely unfixed and universal. Using typography as a tool of abstraction, McGinness exceeds the notion of painting as objective field; instead, his work reconstitutes beauty and spirituality as a bi-product of technology and virtual experience. 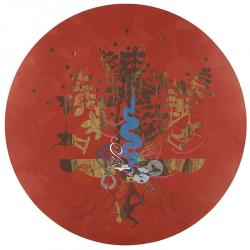 121.9 cm in diamete
Extending beyond Pop‚Äôs elevation of marketing logos to art, McGinness pushes his work into the realm of the commodity. His output spans from traditional paintings to video, installations and a range of consumer products, fusing high and low culture through the language of advertising. In MKULTRA ‚Äì titled after the 1950s CIA mind control project ‚Äì McGinness presents a trippy amalgamation of symbols and patterns on a circular panel. Set on a red background, McGinness‚Äôs entwined logos concentrate sensations of uneasy exotica in their Eastern influenced aesthetic. Using graphic design as subterfuge, McGinness explores the intrinsic cultural narratives contained within generic form. 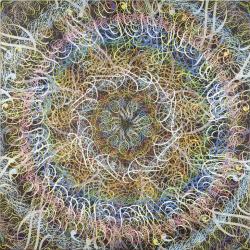 243.8 x 243.8cm
In An(n)us Mirabilis, Ryan McGinness wittily subverts the title of Einstein‚Äôs pivotal publication with abject humour. Spiralling from a central ‚Äòorifice‚Äô, McGinness‚Äôs scrivenery exudes a hypnotic quality as flourishing interlaced scripts create a beaconing pattern in their subtle shift of colour. Replicating the corporeal reference of hair and visualising the virtual field of information, McGinness‚Äôs An(n)us Mirabilis seduces with its graphic perfection. Expanding in a field of weightlessness and disorientation, An(n)us Miraibilis frames desire and detachment as an aperture into the infinite.


Other artists in
USA TODAY 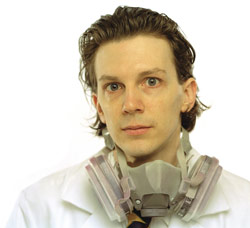 Born in 1972, in Virginia Beach
Lives and works in New York