Structuring his art practice in the same way as a director approaches film making, Ryan Trecartin’s sculptural and installation work incorporates a cast of dozens. Conceiving each show as an experiment in theatrical production, Trecartin conceives loose plots as a basis for collaborative endeavour. Working with a posse of his close mates, Trecartin delegates responsibility: inviting his friends to participate in the creative process, respond to his ideas, and contribute their own input and artwork. Through this unorthodox way of working, Trecartin’s work becomes an uncanny reflection of youth culture, presenting a Gen Y zeitgeist of commodity anxiety, spiritual nihilism, and community value. Trecartin is currently living in LA as a hurricane Katrina refugee; World Wall was conceived as a form of disaster therapy. Working with fellow artist Lizzie Fitch, the project was begun as a simple wooden fence. Enhanced through a series of Mardi Gras float making techniques, this work evolved into a diaristic tribute to New Orleans, a means of engaging with dislocation and loss. Conceived as both a location and living organism, World Wall sprawls with animistic fervour, a seething monument of chaos, festivity, rebirth, and beauty. Through the window, a picture can be seen of the ruins of Trecartin’s old house. 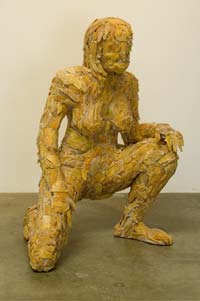 Made with Jesse Greenberg, Mango Lady was originally shown in Ryan Trecartin’s exhibition I Smell Pregnant, a vast multi-room installation incorporating painting, video, and sculpture as a 3 dimensional ‘set’ and ‘narrative’ rolled into one. Facing the wall, she squats as some repulsive vegan-hippie-fertility totem, all co-ed haircut and pendulous breasts. Deliciously scabby, her entire body is plated in dried fruit. Conceiving his installations as a series of potentials rather than faits accomplis, Trecartin’s work openly shares the processes of its making, each piece relating to the next, forming a free-flow dialogue of strategies, approaches, and ideas. His figurative sculptures act as ‘anchors’ within his shows, creating relationships and conversations with each other, and providing recognisable ‘bridges’ between the viewer and the other work in the gallery. Posited between the familiar and the completely surreal, each sculpture conveys a character or ‘type’ specially cast for the scene. 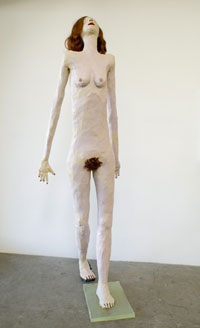 Ryan Trecartin’s work tests the boundaries of authorship and creative practice. Operating in So Solid Crew style, Trecartin designs a strategy and aesthetic around community dynamics. There’s Lizzie, Jesse, Kenny, Brian, Rhett, and Lindsay, and loads of others who’ve helped in their own way, each floating on and off the scene at will. Orchestrating a large group of artists, Trecartin offers a platform of uniting vision, garnering various levels of response from his collaborators. His works are often entirely conceived and made by other artists, while some work under close direction, and others complete projects like ‘tasks’ in a game-like simulation. Trecartin also makes things himself. Presenting a communal practice devoid of ego, Trecartin subtly builds a community vision, based on collective value, spontaneity, and mutual support. Mother encapsulates this harmonious spirit. Oversized, and slightly Charles-Ray-perverse, she towers as a matriarch of DIY splendour. Rake thin and papier mache lumpy, her perfection lies in Rhett LaRue’s best effort. 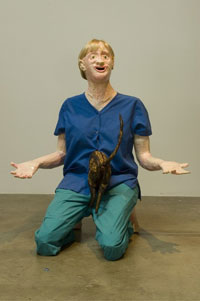 “We consume and consume and puke, more than fetishise the objects and information we use.” Ryan Trecartin explains, “We don’t act inside or outside of consumer culture, entertainment, or art culture, we consume and translate, we’re a by-product of it.” Each of Ryan Trecartin’s figurative sculptures read like TV sitcom characters gone terribly awry, horrible casualties of media overindulgence. Typecast and too familiar, their physical oddities become gleeful jibes at their dumb and predictable expectation, like the result of a satirical writer taking revenge on his popular creations. Despite the initial revulsion, there’s the overwhelming urge to cheer as Vicki Veterinarian (made by Brian McKelligott), a Pet Rescue do-gooder, laughs with thin-veiled chagrin as she’s penetrated by her own pussy. 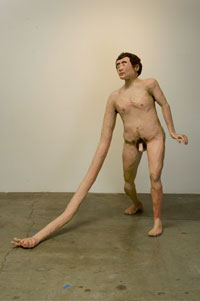 Ryan Trecartin conceives his exhibitions as akin to theatre productions: the actual art work is the show, his sculptures exist as props, memorabilia, or spin-offs representing their contributions to the event. His figures mill about the gallery as potential viewers, a motley crew of freaks and wierdos, an exaggerated and humorous cross-section of society-as-it-is. Made for his I Smell Pregnant show, Abraham With the Long Arm is the resident jerk. Giving lampoon portrayal of the prototypical “afro white guy”, he’s all reachy-gropy gross, a genetic aberration bred for lechery.

Ryan Trecartin’s sculptures are derived equally from the structured formalism of art and the messy stuff of life, materials and circumstances often converging as narratives of coincidence. Inspired by the flower paintings of his friend George McCracken, Her Puffy Poof (made by Trecartin himself) is designed as an alternative plinth and conceptual landscape: its graffitied pot sprouting industrial tube stems, blossoming with George’s canvases â€• their backs further adorned in a crafty copycat manner with rocks and bits of plants. Its title is derived from the particular smell a certain female friend trails when she leaves the bathroom. Incorporating the woman’s perfume and shoes as part the sculpture, Trecartin weaves together a Little Shop of Horrors story of magical association, his punch line: “Puffy poof â€• spray â€• and she’s gone!”

Ryan Trecartin’s film A Family Finds Entertainment is a camp extravaganza of epic proportions. Starring Trecartin’s family and friends, and the artist himself in a plethora of outrageous roles, A Family Finds Entertainment chronicles the story of mixed up teenager Skippy and his adventures in ‘coming out’. In this over the top celebration of queerness, Trecartin’s film mines the bizarre and endearing in an unabashed pastiche of ‘bad tv’ tropes. Cheesy video special effects, dress-up chess costumes, desperate scripts, and ‘after school special’ melodrama combine in the fluency of youth-culture lingo, reflecting a generation both damaged and affirmed by media consumption. 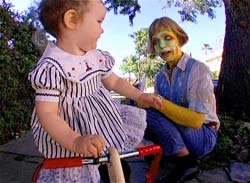 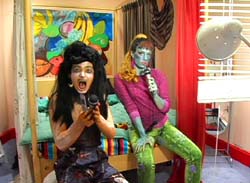 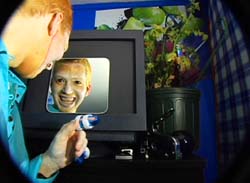 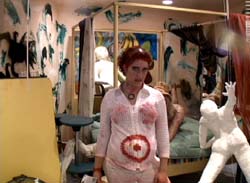 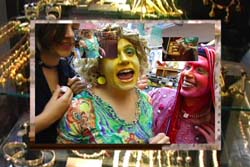 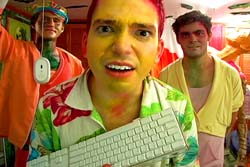 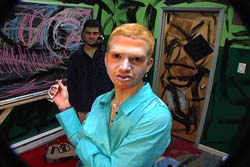 Q.E.D. is pleased to present I Smell Pregnant , the debut exhibition by New Orleans-based artist Ryan Trecartin. Presented collaboratively with independent curator Rachel Greene the exhibition opens January 28th and runs through March 11, 2006. A reception for the artist will be held on Saturday, January 28th from 6-8 PM at the gallery.

This exhibition was executed under the direction of Ryan Trecartin with performances by trusted friends, colleagues and collaborators who have been working together for three years. I Smell Pregnant is an exhibition executed in two parts: an existing 2004 video work, A Family Finds Entertainment and a recent series that transforms the gallery into a environment of interacting sculptures, found objects and animated paintings that filter and modify gallery space through a singular, fresh, next-generation visual language.

Recently selected by Chrissie Iles and Philippe Vergne for the 2006 Whitney Biennial, Trecartin's video, A Family Finds Entertainment centers on the psychological transformation of a character named Skippy, played by Trecartin. The video â€śdeploys virtuosic, decadent, defiant fun and diffuse sincerity to create a blueprint for art making across lines of video, art, internet, television and musicâ€ť writes Greene.

Extracting performances from characters while in simultaneous interaction, Trecartin directs through symbiotic action with the backdrop of beautifully simulated environments captured only on video. The meticulously crafted footage serves as raw material for virtuosic editing, and articulates the languages of popular culture through a prism of meaning that is very much Trecartin's own. Dennis Cooper in Artforum explains: â€śA wonder of Trecartin's work is that his approach seems as intuitive and driven by a mad scientistâ€“style tunnel vision as it is rigorous and sophisticated, grounded in his expert editing and inordinate gift for constructing complex avant-garde narratives.â€ť Trecartin's work lays bare a collaborative process excavated from an increasingly digitalized, over-merchandised and media saturated cultural landscape.

I Smell Pregnant continues methods of working that have more in common with musical or film production team alliances with Lizzie Fitch, Brian McKelligott and Jesse Greenberg. Many of the sculptures in the body of I Smell Pregnantsuggest suspicions of birth, both mechanical aspects of pregnancy (as art production) as well as the possibility of new life, while questioning the potential of the idea. The group, who live together, lost most everything to Hurricane Katrina. Working as displaced persons, the works in the show feel like the byproduct of creation, camp, laboratory or prison where utopic daydreaming and disciplined imposed confinement intertwine.

Ryan Trecartin would like to thank Kenny Curran, Rhett LaRue, Lindsay Beebe, Barked Gulesserian, Alison Powell, George McCracken and Will Gurly for their contributions to the exhibition.