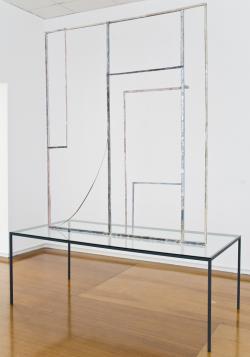 102 x 135 x 10 cm / Table: 58 x 163 x 80 cm
Sara Barkerās works donāt simply breach the boundaries between painting and sculpture, they are that boundary. Skeletal structures in aluminium and steel describe wonky rectangular shapes in the air in hesitant lines, as though uncertain of themselves; their forms are those of sketches, not sculptures. Their surfaces are then coated with layers of oil paint, gouache and watercolour in the blanched and airy palette of a landscape painting. And as landscapes do, Barkerās works posit painting as a thing to be inhabited, and draw on the tradition of inhabited rooms in the quiet modernist lineage of Bonnard and Matisse (one work is named after his 1916 painting āThe Piano Lessonā). 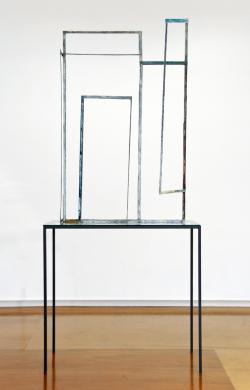 119 x 74 x 19 cm / Table: 83 x 89 x 46 cm
Modernist literature, too, has long provided Barker with inspiration for her spindly spatial constructions: both the metaphorical and actual space of Virginia Woolfās āA Room of Oneās Ownā ā the unfolding of a novel is, too, a kind of space-making ā might provide discreet associations with her work. Yet Barkerās works refuse to cooperate with conventional categorization: these are the spaces between, like the gaps that separate words in a sentence. Their power lies in what they donāt quite say. 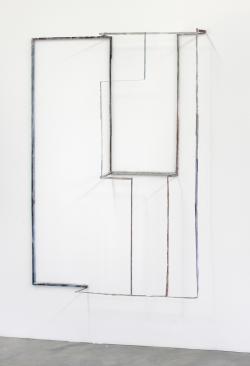 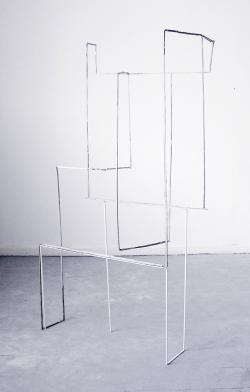 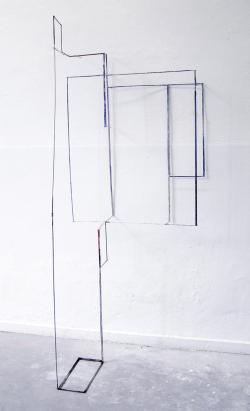 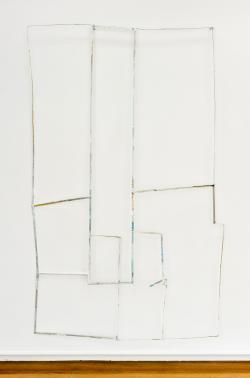 Sara Barker
Everyone Is De Trop 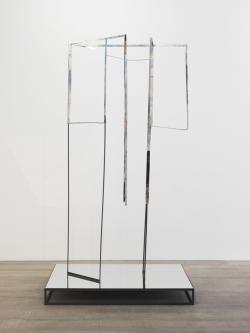 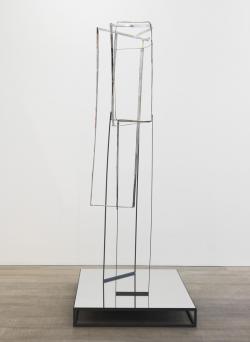 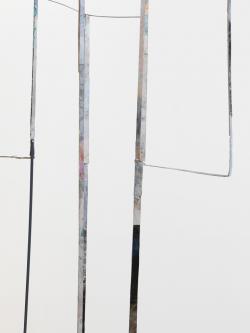 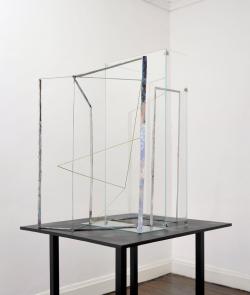 While Sara Barkerās work is theoretically complex, its formal construction and appearance is deceptively simple. Her sculptures are ciphers, of sorts, for an elaborate and personal narrative comprising mostly late-Victorian and Modernist fiction, poetry and biography. The title of her second solo exhibition at Mary Mary, āImagesā, nodded to Imagism (the early-20th-century movement closely associated with H.D. and Ezra Pound), while also referring more directly to the way in which her work frames the gallery space. The six fragile structures shown here (all works 2010) stand just above head height, each construction consisting of both ridged and bowing lengths of aluminum, all painted with gouache in varying pastel tones. Each balances precariously on either the floor or on the glass tops of immaculately produced tables.
In the first gallery, Folly, the largest work here, dominated the space, its latticed construction of uprights, horizontals and diagonals resembling a freestanding set of hackneyed stretchers awaiting canvases, or a room divider missing its panelled surface. But Follyās frame isnāt strong enough to support either ā what we are presented with is a window consisting of various apertures from which to view the gallery and the surrounding works. In denying the form a flat surface or mass, the work frames the location it inhabits; in doing so it encompasses the structureās negative space, using it as a material to fill the void that has been purposefully created. The title, Folly, points towards its architectural definition: a decorative construction, sometimes purposely unfinished to resemble a ruin, built as a talking point or place for contemplation. Again, in the work that stands opposite Folly, Barker implies meaning through her titling, personifying the sculpture with the name Ottoline ā in this case an allusion to the English aristocrat Lady Ottoline Morrell, whose friendships with writers including D. H. Lawrence and Aldous Huxley resulted in her indirect characterization in a number of novels (including Women in Love, 1920, and Point Counter Point, 1928).

Moira Jeffrey discovers there's more than meets the eye in Sara Barker's sculptures, while Mark Handforth shows his hand with neon abandon
IT'S the closing week of June. The exams are over. It's hot. The summer holidays are just beginning. In the garden, the birds are fledging. In university towns all over the country the graduations have begun.
If this all sounds a bit corny, in the vein of John Major's famous speech misquoting George Orwell on English beer and maids cycling to communion, I'll make no apologies for it. I'm a sucker for those times of year when you can just sense the change in the air and it's as well to go with the flow.
In the visual arts, that process of change feels powerful in June, the time of degree shows, the ending of one phase and the beginning of the next. But there's also a constant round of departures, the young artists moving on to the next thing.
That often means a move overseas, a step on to the international merry-go-round of artists' residencies. And that's the case with Sara Barker, whose second solo show at Mary Mary in Glasgow marks both her departure and undoubted arrival.
Barker, who studied in Glasgow, has moved on for the time being. Now she's in Amsterdam where she will shortly begin the prestigious studio programme at de Ateliers, an international set-up for young artists that provides them with a peer group, a context and, most importantly, a studio: that crucial room of their own.
It's perhaps not surprising then that Barker has been thinking hard about what that might mean. For some time now her reedy, frail sculptures, made from scrappy found material, have become increasingly reminiscent of shelters or domestic structures: windows and doors.

Barkerās focus has been on working with a combination of industrial and sculptural materials such as metals, cement and wood ā together with collage, painting and craft techniques ā to create her own unique forms. Her vision is to approach her sculptures with a lightness of touch that allows something more shifting and corporeal to evolve. More recently, her work has become pared down to the point of frailty ā narrow silhouettes that are either free standing, anchored to the wall or with supportive steel structures.
As an artist she is particularly drawn to literary influences. Frieze magazine notes that, āWhile [her] work is theoretically complex, its formal construction and appearance is deceptively simple. Her sculptures are ciphers, of sorts, for an elaborate and personal narrative comprising mostly late-Victorian and Modernist fiction, poetry and biography.ā
Conceptions of what a room is and means are also a powerful theme. Reviewing her 2010 exhibition Images in Scotland on Sunday, Moira Jeffrey observes that her show āexplicitly refers to the idea of a room: that space, both literal and metaphoric, that Virginia Woolf insisted every woman must have if she were to pursue a creative lifeā.

Caroline Achaintre, Sara Barker, Alice Channer is a three person exhibition forming the space of the gallery with discreet and autonomous moments of object making via careful labour. Exemplifying a strong resurgence in material practices across the UK, the three artists produce sculptural works exhibiting precise languages of process, material or contextual manipulation. With a nod to the long lost divide between abstraction and figuration their divergent works take positions of figure, foreground, background, and architecture as a scene of unrelated moments forced into dialogue

Sara Barkerās seemingly precarious geometric constructions, narrow silhouettes with a fragile surface are either free standing, anchored to the wall or supported by steel structures that hold and echo form. Composed of aluminium and other metals then hand painted with thin, layered washes of paint her slight frame structures occupy and own space, despite a lightness of form. Central to the work is the abstract notion of āthe roomā projecting an interior state and rendering a subjective condition. Barkerās sculpture employs both romantic conceptions of a room from poetry and short stories, alongside biographical writing, particularly modernist and imagist, including texts by Virginia Woolf, Doris Lessing and May Sarton.

Sara Barkerās sculptures are formed from sparse linear structures, comprising and being comprised of varied, crooked rectilinear shapes. The narrow frames of her work are repeated, fragmented and fitted together to read as if drawings in three dimensions: outlining space and creating a sense of volume and solidity for each work with what seem to be frail and humble propositions. Whilst ostensibly formal and certainly reticent, Barkerās work takes influence too from notions of the sentimental and romantic. Barker often makes use of quiet literary references to allude to something otherwise unspoken in the work: this show, for example, takes its title from that of Caspar David Friedrichās painting of a female figure standing before a window, gazing out of a room through its frame, looking upon an architectural scene-within-a-scene.

Young British artist Sara Barker takes the frame as her point of departure in approaching drawing. She creates sculptures that cut positions into the space. Her fragile constructions, composed of newspapers, aluminium and other metals, create three-dimensional drawings, which produce new spatial proportions and generate thresholds. Barker constructs transitions, whose materials assume seemingly impossible stances. Held in place by the paint and newspapers layered upon them, Barkerās figures are never imprecise or sketchy. They are characters, bearing precise names that identify them as minutely detailed reconstructions of a context, as aesthetic descriptions of a relationship.