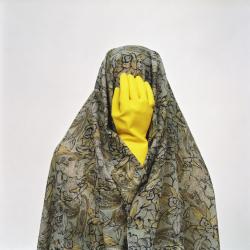 Challenging the international preconceptions of women’s roles within an Islamic state, Tehran-based artist Shadi Ghadirian’s photographs draw from her own experiences as a modern woman living within the ancient codes of Shariah law. Her images describe a positive and holistic female identity, humorously taking issue with the traditional roles by which women – both in the Middle East and universally – have been defined. 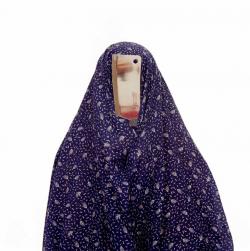 Ghadirian uses an ordinary kitchen utensil as a readymade pun. Through her simple recontextualisation of a cleaver, she develops a fictional character of hilarious proportions as the old adage of ‘hatchet face’ comes to life as a one eyed shrew. Branded with the knife company’s label – Shogun – she’s not a woman to be reckoned with. 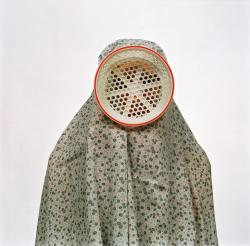 Through her staged photographs, Ghadirian’s everyday objects become elevated from anonymity to form a group of distinctive portraits. Humorously drawing upon the humanistic forms of each item, common goods resonate with suggestive narratives, ironically exaggerating misogynist typecasts. In this work a colander adeptly represents a woman who’s all mouth: a neighbourhood gossip conceived as a human sieve, endlessly broadcasting like a loud speaker. 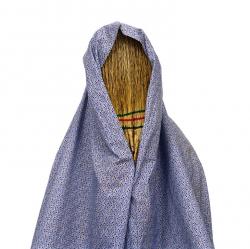 A shrouded broom huddles with timid demureness, her form most associated with ‘doormat’; beneath her veil, however, the broom handle stands in for a sturdy backbone. With her countenance made up of a straw besom, her expression appears wizened and worn, indicating time honoured knowledge and the tenacity and temper of a charwoman. 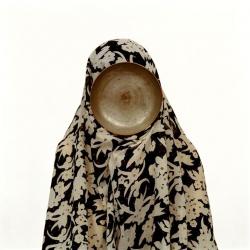 Her Like Everyday Series was created from the plethora of domestic gifts she received after her wedding – items completely foreign to a young professional. Using these objects – such as irons and frying pans – as masks to cover the faces of her veiled sitters, Ghadirian’s photos ironically portray a one-dimensional interpretation of housewives, absurdly reducing their identities to cooks and cleaners. 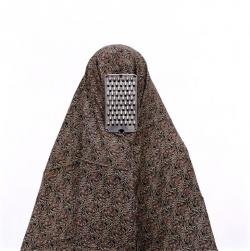 The title of Ghadirian’s Like Everyday Series refers both to the materials she uses in her photos and the derogatory social perceptions that women regularly face. Her cast of crudely rendered women cleverly reinvents the sources of negative stereotyping as attributes of empowerment. A grater-faced wife, the dreaded prototype of mother-in-law jokes everywhere, radiates a steely and abrasive determination. 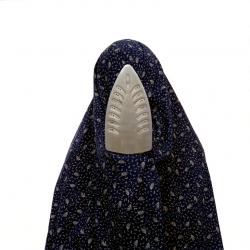 Replacing the expected monotone of the black chador with vibrantly patterned fabrics, each portrait suggests a vivacious individuality and character, belying the limitations of stereotype. Similarly, the mundane objects, when transformed into faces, become highly poised and charismatic caricatures, embodying individual personalities. 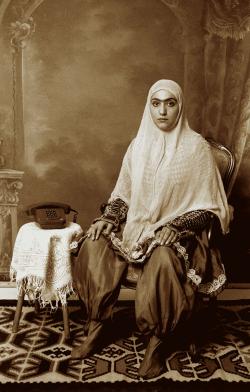 The Ghajar dynasty ruled Iran from 1794-1925; and from its inception photography was popular with the elite, documenting women as well as men. The images from this period tend to share stylistic devices: people are posed, usually as individuals rather than groups, in the very elaborate settings of their homes, often sat next to or holding prized possessions or objects of status. In photos of this period, women were permitted to be pictured in less formal dress within the privacy of their homes, and some members of the Shah’s harem were even photographed in tutus in accordance with his predilection for the ballet. Though Ghadirian’s images replicate the settings and traditional costumes of this time, her women are presented in a much more modest way in their postures and poses, in adherence to more ‘contemporary’ custom. 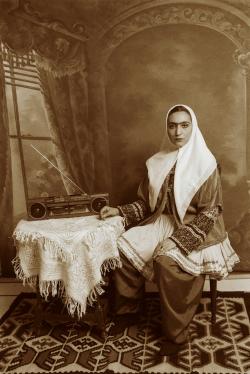 Ghadirian’s Untitled from the Ghajar Series is shocking not only for its anachronistic props, but for the sheer brazenness of her subject: defiant in her gangsta posturing and holding a ridiculously large ghetto-blaster. Ironically, this image is most in keeping with her historical references, showing the self-possessed attitude of her sitter. In this piece Ghadirian’s surreal time-warp happens in reverse: the initial joke is that the 1980s radio is out of place in the antique setting, but it is the vintage scene and pose which is in fact much more modern. Ghadirian uses this subtle humour to describe a contemporary Iranian female experience of existing as if outside of time. 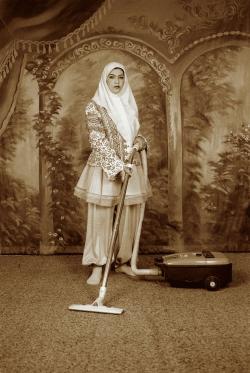 Inspired by 19th century photographs from the Ghajar period – the first portraits to be permitted by religious law – Ghadirian carefully reconstructed the opulent style of these images with the help of many friends: borrowing antique furnishings and costumes, commissioning the painted backdrops, inviting them to pose in the images. Picturing each woman in a bygone era, each scene is jarringly interrupted by the presence of contemporary products – a phone, boom-box, hoover – pointing to a culture clash of tradition and progress. The women stare out from the photos with an unnerving directness, detached from their environment, and confident within themselves. 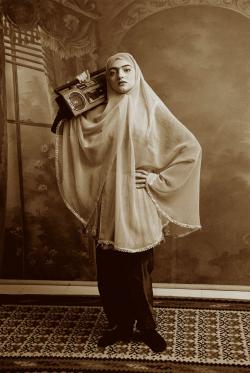 Ghadirian’s Untitled from the Ghajar Series is shocking not only for its anachronistic props, but for the sheer brazenness of her subject: defiant in her gangsta posturing and holding a ridiculously large ghetto-blaster. Ironically, this image is most in keeping with her historical references, showing the self-possessed attitude of her sitter. In this piece Ghadirian’s surreal time-warp happens in reverse: the initial joke is that the 1980s radio is out of place in the antique setting, but it is the vintage scene and pose which is in fact much more modern. Ghadirian uses this subtle humour to describe a contemporary Iranian female experience of existing as if outside of time.

When 15 Royal Navy personnel were imprisoned in Iran recently, it was the female Leading Seaman Faye Turner who quickly became the focus of events. Much was made by their captors of the fact that Britain sends women to war, and the whole incident threw into stark relief the difference between the lives of women in the West and those in Islamic countries. It's a subject that has inspired one of Iran's leading photographers.

"Being a woman in Iran is hard, and working as a woman photographer is even harder," says Shadi Ghadirian, 33, who lives and works in Teheran. A graduate in photography at the capital's Azad university, Ghadirian has to follow specific moral guidelines when creating her images, or suffer harsh sanctions that might lead to her being banned from showing her work. Her photographs cannot, for example, show a woman's hair, let alone physical contact with any man. Hotels don't give rooms to single women on work trips, and she does not drive alone. But Ghadirian still finds a balance that enables her to express herself while respecting the society in which she lives.

Born five years before the 1979 revolution, Ghadirian has stepped into the international limelight in the past few years with her compelling images linked to her identity as a Muslim woman living in Iran. First came her series of portraits inspired by old plate-glass photographs from Iran's Qajar period (1794 to 1925) which she discovered while still a student at Akskhaneh, a historical archive in Teheran. "Until that time, portraits were forbidden in Iran for religious reasons," she says, "so the impact of these photographs on 19th-century Iranians was enormous."

For her own Qajar portraits, Ghadirian asked a painter friend to recreate the elaborate 19th-century backdrops. She then borrowed vintage clothing in which to dress women friends, asking them to re-enact the poses in the old photographs. She juxtaposes these traditional images with symbols of contemporary life: one woman poses in a traditional costume holding a can of Pepsi; another props up a mountain bike; a third stands with a ghetto-blaster hoisted on her shoulder.

A further image of a seated young woman reading a copy of Hamshahri, a Teheran newspaper, was used in Word into Art, a British Museum exhibition of Middle Eastern contemporary art that will travel this autumn to Dubai, where galleries - such as B21, which hosted a show by Ghadirian earlier this year - showcase work by young Iranian artists.