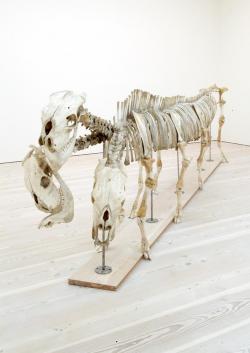 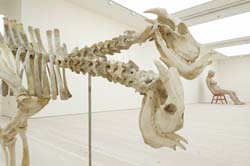 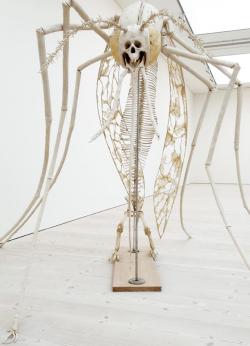 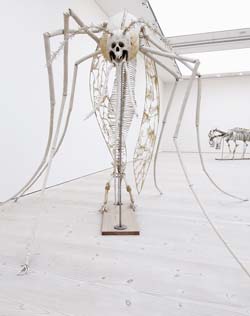 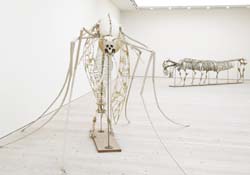 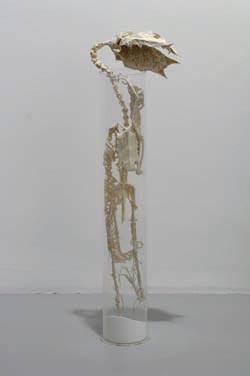 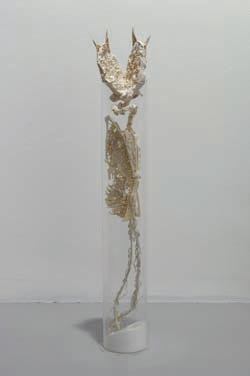 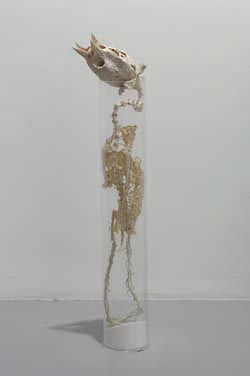 BAREBONE CREATURES THE ART OF SHEN SHAOMIN
By Gu Zhenqing

The Australia-based Chinese artist Shen Shaomin, seemingly a maverick in real life, stocks up in his studio with ghastly animal bones. A good command of this distinctive raw material - also a metaphor for death - facilitates his search of a spiritual world which has been long floating afar. In fact, Shen adopts a less-material approach to highlight the quality of spiritual value. Constantly skeptical about the mundane social rules, he casts a stare at the starry sky from time to time.

With a silent attentive listen paid to a remote echo down from the prehistoric world, artist goes into and ponders upon the fortune of all creatures the Earth bears and rears, which is reflected in his work as a classic-idealistic perfection and a near ruthless visual pursuit as well as the pure persistent humanism of an intellectual.

Shen first showcased his bone-made installations in 2003. Following a fictitious strategy, he has fabricated a body of skeletons of some unidentified beings which might have never existed.

Initially the works which were produced with bones of vertebrates - species close to human life - underwent systematic procedures as professional as those of an international museum, and eventually enjoyed the installation no different than the display of ancient fossils. Whether from the large animal as cow and sheep or from the small rabbit and rooster, bones - after being rearranged, installed and reshaped - were fixed in a configuration as strange to viewers as the skeletons of some unknown beings. Unknown Creature - Three-headed Monster that came out as his first magnum piece has three bullheads to compose its own and its framework bears an inscription of artificial characters and signs.

At the first sight, it will trace back the unforgettable eye shock one has had in a childhood visit to the Jurassic dinosaur fossils at the museum.
His boyhood imagination was set alight by a chronic enthusiasm about the pixies and beasts registered in The Classic of Mountains and Rivers. Jaded with time, it faded away, frozen in the depth of his memory. And the memory in turn was activated later during his days in Australia. Thanks to the quantum leap in biotech, Australia together with developed countries in Europe and America conduct experiments on animals in efforts of renovating the life.

Since clone and genetic engineering are approximating the perfection and generalization, more and more attentions of media and general public are caught and controversy is sparked over the outrageous experiments performed by advanced biologic laboratories in these regions. Besides the social benefits, biotech goes beyond the morality and ethic with an unprecedented alteration and mastery of lives, which is followed by disquietude about the disorder of species and the ecological disequilibrium. White mice with human ear, rats with human brain, and possible products of this kind come off the cross-group experiments and they are quite akin to the monsters in Shen's eyes.

So he fears that a hazard of eating away and replacing the terrestrial lives is brewing with the rise of artificial beings as a would-be new breed in the consumption-oriented society. Then will one day humankind and other living things struggle on the verge of extinction?