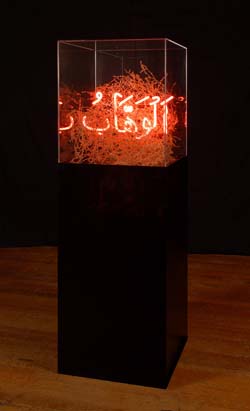 London based artist Shezad Dawood’s British and Pakistani rootsare reflected in his works. Appropriating many of his ideas from modern European and American aesthetics, Dawood generates a critical examination of identity. This series of sculptures are made of neon, entangled in tumbleweed and placed on aluminium plinths. The Bestower, The Protector, The Judge and The Majestic, utilise traditional scripts that radiate from the centre of a ball of tumble-weed, reflecting an element of the divine. 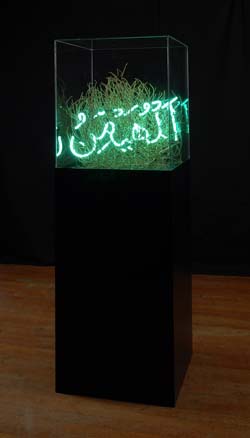 163 x 51 x 51 cm
Each of Shezad Dawoodâ€™s neon works reflects the artistâ€™s interest in the ninety-nine beautiful names of God. Each attributed to Allah; the objective nouns are intended to describe every single aspect of the divine. Dawoodâ€™s neon works examine Islam as well as the doctrine of the early American frontier, since both grand ideologies were born of similarly dry and desolate surroundings. 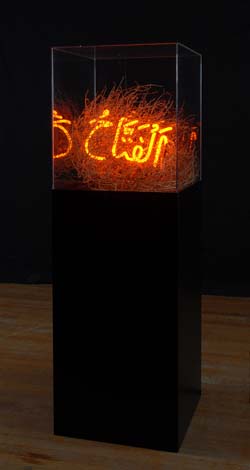 The neon works reject the rhetoric of a clash of civilisations, looking at a formal synthesis between East and West. Dawood’s works deliver a very complex set of notions that arise from symbols that are inherent to the two cultures that Dawood is familiar with. 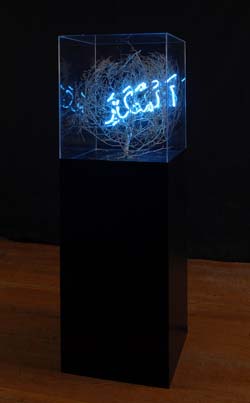 163 x 51 x 51 cm
Dawood describes his attempt to formally represent notions of the divine as strongly as he represents something of the formlessness and abstraction at the heart of modern America. The disheveled tumble-weed balls that are anchored into each plinth exist as symbols of time. The sculptures also reference the history of the American West, acknowledging the rise of a new kind of social religion embedded in bold patriotism.

Seeing as he is currently based at the Wysing Arts Centre, it was a short trip for Shezad to the BBC offices in Cambridge. However, it might have been hard to tear himself away from his work, simply because it sounds like the most fun place to be. Ever.
Shezad's new project, entitled Feature, will eventually take the form of a film. It will have cowboys and Indians like a lot of other films do.

They'll be gun fighting, line dancing and meeting zombies, just like Mr Eastwood used to.
Well, maybe Clint never came face to face with a zombie, but it's probably safe to assume that Clint wouldn't like this kind of movie.
"My family's originally from India and Pakistan, I was born in London in Hammersmith and I've lived in various cities and countries," says Shezad, his accent soft but confident, a middle-England tone that belies his Asian roots and even his West London home.
"I guess it leaves you without any kind of fixed centre. I've learnt to rethink the way I see the world because of that and find it hard to believe in conservative nationalisms."

The results can be a "crazy mix", as Shezad describes it. A blend that can involve jumbo sets of the Rocky mountains created in Pakistan and cowboy gun-fights in the countryside - most of the filming has been done in Bourn or at the Wysing Arts Centre.


A little bit of Hoxton in Dubai - What sold at the first Gulf Art Fair? Gavin Turk's prized rubbish bags or a gun-wielding terrorist Snoopy?

Wealthy Emiratis in flowing robes, homesick expatriates and even visiting Premiership footballers were in buying mood at the inaugural Gulf Art Fair in Dubai. But despite a strong presence from international galleries, the heaviest spending was not on Western art but on Asian and Middle Eastern pieces.
Soaring oil prices and a construction boom mean that potential art investors (whether local sheikhs or hedge-fund managers) are plentiful in the Gulf, and at the beach-side fair 38 galleries from Delhi to New York were all eager to cash in, presenting works worth a total of $1 billion (ÂŁ517 million) for sale in the first event of its kind in the Middle East.

The dollar sign was a conspicuous emblem throughout, whether embossed on a lurid silkscreen by Andy Warhol, contorted into a sculpture by Keith Haring or, more resonantly, forming a mould filled with crude oil by the Russian artist Andrei Molodkin.
Yet the fair's organisers predict that Dubai's wealth and location is well suited for culture as well as profits. They claim that the desert back-water-turned-commercial hub - although now best known for its hotels, golf courses and low taxes - could become "the most important centre for contemporary art in Asia, likely to rival London and New York within a decade".

The boast befits a city with the audacity and wealth to build what is soon to be the world's tallest building, the Burj Dubai tower, already 110 storeys and rising. But for all the Emirate's aspirations to form a bridge between East and West, cultural tensions were apparent even before the fair's opening.
Restrictions imposed on the exhibitors, including the White Cube and Albion galleries from London, meant that only art deemed suitable for exhibition in an Islamic state would be accepted. "We asked all galleries to make careful provision - that is, chiefly concerning nudity and religious imagery," says John Martin, the fair's director, who has established the project from nothing more than a beachside dream in less than two years. "Selling is the name of the game here, and in our first year there is a bit of a pioneer spirit, but already we hope next year to double in size." The financial clout of the commercial art galleries causes a trickle-down effect to improving public institutions, Martin argues, and recent multimillion-pound sales of contemporary art by Christie's and Sotheby's in Dubai and its neighbour, Abu Dhabi, have been followed by plans for new showcases for the Louvre and Guggenheim collections in the region.
Buyers included Sol Campbell, the former England defender, who spent $60,000 (ÂŁ31,000) on a photographic print of a forest by the Korean artist Bien-U-Bae while visiting the fair between training sessions at Portsmouth Football Club's nearby camp.