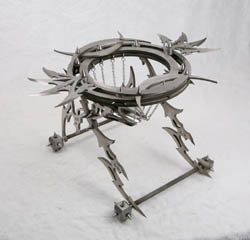 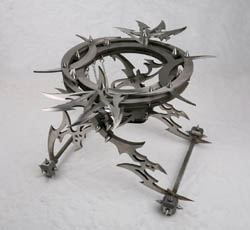 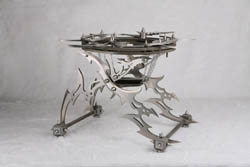 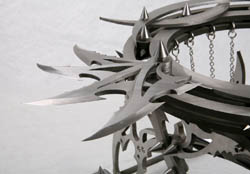 54 x 59 x 66 cm
In Chinese lore Na Zha is the militaristic child god of pranks renown for his penchant for violence and cunning mind and revered for ’power dressing’ with his flaming trousers and fireball feet; he is now most widely associated as the patron saint of lotteries, gambling, and the high life, and as the star of a childrenâ€™s animation series. In Shi Jinsongâ€™s Na Zha series, this dubious character is humorously reinvented as the new face of Mothercare with a range of deadly baby products. With its executive stainless steel design the Na Zha Walker offers everything a little tot needs for a future in negotiating a global economy: an early appreciation for the aesthetics of industry, razor sharp ’bargaining’ skills, multi-functional switch-blade gadgetry, and itâ€™s narrow enough to race through any doorway.

Chambers Fine Art is proud to announce the opening of Na Zha Baby Boutique. Comprised of sculptures, blueprints, and photographs, this exhibition represents the debut solo show by Shi Jinsong, one of the leading young sculptors in China.

The title refers to an enduring figure of Chinese folklore and mythology: Na Zha, an impish trickster with supernatural powers and flamboyant fashion sense (legend has it his red silk trousers generated so much heat the sea began to boil, enraging the East Sea Dragon King). Na Zha's essential ferocity long since tamed in the Chinese psyche, he is now chiefly celebrated as a God of Lotteries and Gambling, a commodified totem of the new global economy.

Through his razor-sharp sculptures and related works, Shi Jinsong initiates a dialogue, at once menacing and ironic, between the forms of mythic Chinese culture and modern day globalization. "Na Zha" is here recast as the brand name for an outrageously unsafe line of baby products. Meticulously assembled in stainless steel from intricate mechanical drawings, they include a deadly Carriage; a sadistic Cradle; a sinister Walker; and a malicious, multi-part Toy complete with needle-tipped pacifiers and dismembering abacus. Baby Boutique confronts its "shopper" with a radically strange and seductive "product," lethal luxury designed to reveal the forces that dominate our lives in unimaginable ways.

Born in Danyang County, Hubei Province in 1969, Shi Jinsong enrolled at the Hubei Academy of Fine Arts in 1994, majoring in sculpture and mastering a gamut of traditional techniques. Under the influence of three powerful stimuli - radical socio-cultural change in China; a reading of Foucault's Madness and Civilization; and the birth of his first daughter - the artist began to investigate ideas of transformation and control. Featured in Alors La Chine, a groundbreaking survey of contemporary Chinese art mounted at the Centre Pompidou in 2003, his sculptural installation A Life of Sugar (2001) consisted of aspirational material objects made of sugar. Designed to melt over the course of the show, the impermanence of the objects served up a delicious critique of disposable consumer goods.