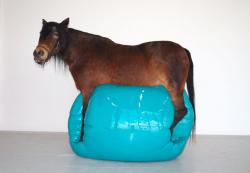 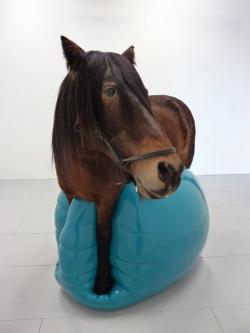 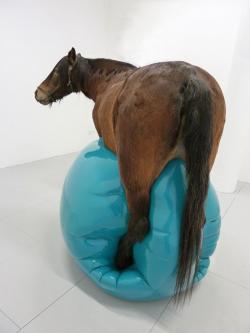 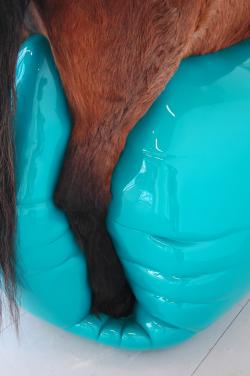 Tell me a bit about your work‚Ä¶
In brief my work is about collective trauma and collective amnesia and I deal with it through absurdity, humour and magic realism. Although my works take on a different format, in essence they are all connected to elements of a shared narrative told through the story of the individual. In my drawings and paintings I use earth elements like crude oil or natural pigments like Lapis lazuli, malachite etc., because I am interested in the message being in the material as well as the poetry of the earth being part of the work. My drawings are made with Iranian crude oil which I brought over to the UK in 2009, the images are based on my family photographs; the narrative is layered allowing the viewer to come to their own conclusions. In my paintings I use egg-tempera and for that I use the medieval technique of grinding the colour pigment and mixing with egg yolk. It is a very laborious process which I see as somehow anarchic, a way of resisting contemporary consumer culture, characterised as it is by instant gratification. I also paint and draw on calf vellum (also known as parchment), which for me symbolises the sacrifice of the individual because the calf is the animal that is sacrificed in all the major monotheistic religions. I guess there is always an element of death in my work whether I am working with a taxidermied horse or expired passports.

Do you see yourself as an essentially Iranian artist?
This is a difficult question‚Ä¶ I think of myself as an Iranian born artist, I have lived the larger part of my life in England but I guess I will always be called an Iranian artist. It is quite natural for artists to work with their personal history and that cultural diversity is something to be celebrated, however, it can also be pigeon holing, which can be a real issue when trying to navigate the art world.

What inspires you?
Anything can inspire me from a spider‚Äôs web to constellations of stars. Artists are unique in that there is a heightened sensitivity or awareness of the world that makes us see everything in a different way. It is this ability that allows artists to draw attention to things that others miss.
Whose work do you most admire?
Philip Guston, he is an artist that I admire deeply. I wish I could own one of his works. He is honest, interesting, intense, fearless, one of the best modern artists in my mind. At the height of his fame he embarked on a new style, which shook the art world and made him many enemies and instead of bending to pressure he continued on a path that changed the art world forever.
What is the relationship between form and content in your work?
In my paintings I deal with what Susan Buck-Morss refers to as ‚Äúanaesthetised aesthetics‚Äù a sense of over aestheticisation as a means of dumbing the senses in order to address fascism, repression and authoritarian rule. These photographs date back to the totalitarian rule of the Pahlavi dynasty; I am interested in how Iranian people collectively experience amnesia towards that part of our history, what happened and why there was a revolution. I was a child then so I have little memory of that era, and therefore see myself as an observer/ outsider looking in. These paintings deal with life/death and the liminal- that space between the real and the unreal.

Born and raised among a variety of artistic influences, Soheila Sokhanvari had the makings of an inspired artist. From childhood her father taught her the fine art of Persian miniature painting, and in her range of delightfully unusual pieces she now fearlessly explores personal and universal themes of trauma. We take a look a look at the emerging artist‚Äôs works and quirks.
Early career steps:
At the age of seven Sokhanvari enrolled in an art course in Shiraz, a pre-revolution center for the arts in Iran. Deriving inspiration from nature rather than coloring books, the artist developed a discerning, detail-oriented and imaginative eye. But these capacities were kept in the proverbial closet for much of her academic and working life ‚Äì the perceived practicalities of which took precedence. It was not until seven years into her career as a research scientist with Cambridge University that she chose to formalize her artistic tendencies and take up the study of fine arts.
Sokhanvari‚Äôs quirky collection:
Sokhanvari was gifted her first expired passport, along with letters from a deceased family member, by a friend back in 2005. Today she is the curious owner of one hundred passports. That‚Äôs one hundred personal and very official individual portraits. In her own words, she is ‚Äòinterested in legal documents that contain so much personal information, with the image of the holder as a portrait that has a unified composition set by governments globally‚Äô.
The artist‚Äôs captivating work:
Whether it is through the composition of the piece or the choice of materials, Sokhanvari‚Äôs artwork beckons you to come closer and contemplate its significance. There are layers to be explored that are somehow bold and subtle at the same time. In ‚Äòwoman holding an ice cream‚Äô, for instance, you are immediately struck by the formality of the portrait juxtaposed with the rapidly melting ice cream in the woman‚Äôs hand. Mannequin-like, she is frozen in time, but the ice cream is moving and melting. She wears the gold fabric of cultural history, and stands against the stark, empty blue backdrop ‚Äì isolated in time and space. The piece oozes nostalgia; your eyes are drawn to look, not just glance.