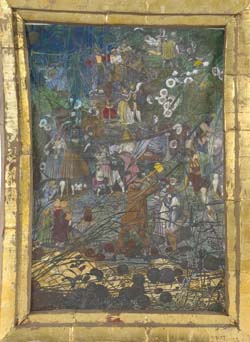 The Fairy Feller is an enlarged hand-tinted and gold-leafed photocopy of Richard Dadd’s most famous painting. Epitomising the Victorian fervour for the supernatural and occult, Dadd’s canvas shows a fantastical narrative that draws from mythology and literature. Its obsessive detail is often attributed to Dadd’s psychopathy: the painting, made during his long incarceration at Bethlem Hospital for the criminally insane, took 9 years to complete. Spartacus Chetwynd appropriated this image to use as a prop in a performance that celebrated radical British visionaries such as William Blake and Mary Wollstonecraft. In the performance, nymphs burst from the painting and danced to music from The Seventh Seal, an Ingmar Bergman film which takes its name from the biblical prophecy of The Final Judgement. 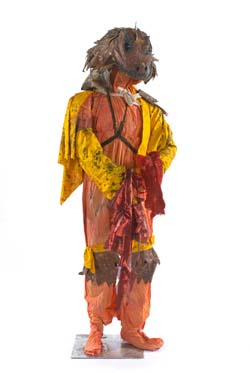 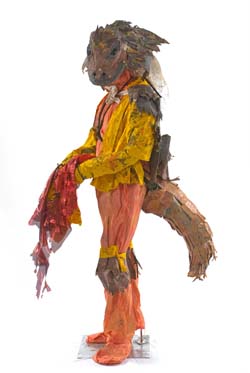 170 x 100 x 60 cm
Chetwynd celebrates occasions in cultural history that exemplify extremist behaviour and belief. Her work cites instances that blur genius and madness to expose the raw zeal, aspiration, and creativity of utopian vision. The Lizard, The Mole, and The Stick Insect were all made as costumes for a performance about wildlife conservation. Chetwynd‚Äôs play was inspired by Joy Adamson, author of Born Free, a true story about Elsa, an orphaned lion cub that Adamson adopted, raised, and re-habituated back into the wild. Though Adamson is acclaimed as a pioneer of conservation practice, her fervent love of animals made her unable to relate to humans: she was murdered by one of her employees who mutilated her body to make it look as if she was killed by a lion. ‚ÄúI started making animals because you can‚Äôt have a production about this type of person without that environment.‚Äù Chetwynd explains. 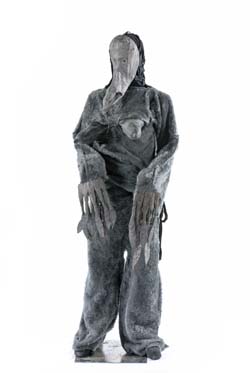 170 x 60 x 60 cm
Chetwynd describes her approach to art making as ‚Äúunbridled enthusiasm‚Äù. For each work she strives for total immersion into the worlds of her subjects, honouring their passions and contributions with her own. This is reflected in the DIY style Chetwynd employs: her objects are handmade to illustrate how the earnest (and seemingly ridiculous) efforts of one person can have real and meaningful consequences. Chetwynd never uses prefab materials: the outfits are sewn from cloth which she dyes herself using paint and salt, and masks and other accessories are made from latex moulds or cardboard. Her figures, such as The Mole, are humorously sympathetic and also slightly sinister, highlighting the moral dilemmas and fated plights associated with fanaticism. 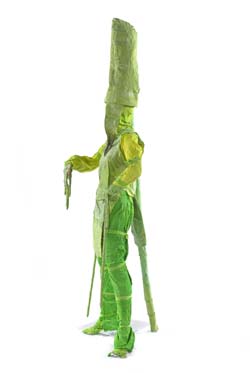 220 x 60 x 60 cm
‚ÄúEnthusiasm makes sense to me,‚Äù Chetwynd reveals. ‚ÄúMy work is more like comedy or carnival rather than something that is professionalised; it has a fun rebellious energy. Humour is often marginalised, it‚Äôs underestimated how hard you have to work to get or keep your ground. My performances are really gestural and are not meant to exist afterward. I wanted to burn the costumes after, but really had to change my attitude. My heroes are the Marx Brothers, but I only know them off video. They bothered to make their fun, gestural, off-hand experience package-able, not in a dark way but in a way that people can enjoy afterward forever. It’s important to make an effort to make things that last so they can continue to communicate to people."

SPARTACUS CHETWYND THE EPIC AND THE EVERYDAY; THEATRE, BATS, PUPPETS AND PAINTINGS


Last year, on her 33rd birthday, the British artist Lali Chetwynd changed her first name to Spartacus, after the gladiator and leader of an audacious, ultimately unsuccessful slave uprising against Rome in 73-70 bc. Not quite a stage name like Meat Loaf, a pseudonym like Marcel Duchamp's Rrose S'lavy or a Subcommandante Marcos-type nom de guerre, Chetwynd's adopted moniker seems designed to make us stage a mock-heroic mini-drama in our minds, in which she persuades a band of artists to stop pitting themselves against each other and instead revolt against their masters. Push this fantasy a little further (and Chetwynd's art is nothing if not about pushing idle thoughts as far they'll go), and we might imagine the defeated rebels refusing, pace Stanley Kubrick's 1960 film Spartacus, to identify their chief, instead claiming one after the other I'm Spartacus, only to be symbolically crucified by a poor auction result or a less than complimentary review. If this flight of fancy resembles the absurd, unexpectedly telling narratives and motifs that characterize Chetwynd's work, then this is no mistake. In her practice the epic and the everyday speak through each other in accents of giggled hope.

Over the past few years Chetwynd has, with the aid of an elastic troupe of some 20 friends and family members, staged a number of performances that draw on everything from Conan the Barbarian (1982) to The Incredible Hulk, from the performances of Yves Klein to Hokusai's erotic print The Dream of the Fisherman's Wife (1820). Equipped with jerry-built costumes and props formed from an assortment of found materials, the artist and her mummers' band tell tall tales in a manner that recalls at once the theatre of Alfred Jarry and Bertolt Brecht, a disco at a science-fiction convention, and a primary school nativity play. Although carefully produced, these spectacles seem always to teeter on the brink of joyful anarchy: the performers sip beer, extemporize lines and distractedly check their text messages, as though what's important here is not persuading the audience to suspend their disbelief but instead to introduce a measure of the carnivalesque into everyday life. While future art historians are likely to read ritualistic, socially dynamic dramas such as 2003's An Evening with Jabba the Hutt - in which the grotesque Return of the Jedi (1983) villain is re-imagined as a smooth ladies' man through the lens of Chetwynd's undergraduate training as an anthropologist, I can't help but think her works are just as influenced by the let's-put-the-show-on-right-here-kids attitude found in the BBC children's television series Why Don't You? (1973-95).