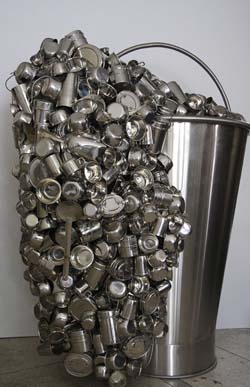 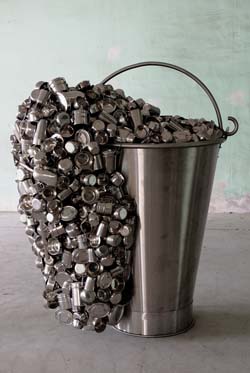 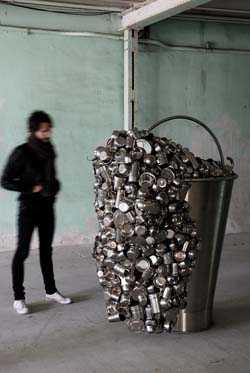 Subodh Gupta employs many of the original techniques of French conceptualist Marcel Duchamp by elevating the ready-made into an art object. Gupta chooses signature objects of the Indian sub-continent and relocates them as art objects in monumental installations of stainless steel and tiffin-tins. Spill is an overbearing work of great scale that has at its centre a larger than life stainless steel water vessel, with many smaller steel utensils spilling over the edge like water pouring out. 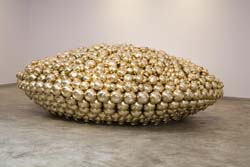 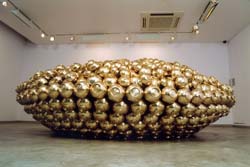 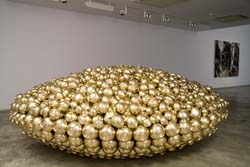 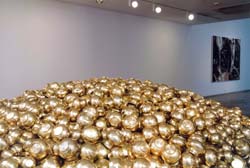 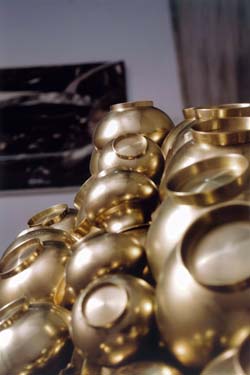 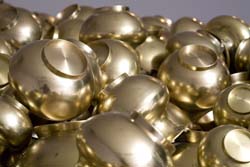 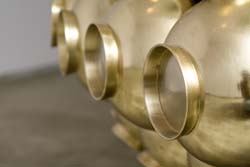 114 x 305 x 305 cm
U.F.O 2007 is another work made up of hundreds of brass water utensils that are soldered together to resemble a flying saucer. This gleaming sculpture is amusing yet pertinent to ideas of sustainability, poverty and notions of otherness. The repetition of forms and the exaggeration of scale is a common element in Guptaā€™s work.

Oil and enamel on canvas

198 x 366 cm
Guptaā€™s painting Still Steal Steel is a strange juxtaposition of a still life of steel utensils in the fore-ground, with a slightly garish floral design in the background. Gupta employs the effectiveness of a hyper-realist palette that suggests that the objects are more real than reality might allow. Guptaā€™s configuration of steel utensils along with the introduction of a floral element appears to reference a hierarchy of decorative forms. 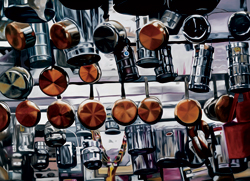 168 x 229 cm
With Untitled (Pot) Gupta manages to elevate his ready-mades to positions of grandeur. His still-life paintings appear to celebrate objects in space almost as successfully as his ready-mades do. Row upon row of copper based utensils and tiffin-tins hang from a kitchen ceiling. Guptaā€™s paintings transform the objects to appear more valuable than usual.

The fall art season in Paris got under way this year on Oct. 7, 2006, with something called "La Nuit Blanche" (which is French for "all-nighter"). An ephemeral night among ephemeral Parisian nights, "La Nuit Blanche" features, at least on the artistic end of things, a variety of artist projects presented in various quarters around Paris.

The event is so dispersed and the crowds so maddening that attempting to see everything seemed pure hubris. Instead, I simply stuck with the La Goutte d'Or in the 18th arrondissement, where my goal was Indian artist Subodh Gupta's much-talked-about sculpture in the Eglise Saint-Bernard church.

La Goutte d'Or (The Drop of Gold) is famously one of Paris most "ethnic" and underprivileged neighborhoods -- the neighborhood around the metro at, say, the Chateau Rouge stop seems transplanted from sub-Saharan Africa. That Gupta's sculpture should be located in a church in this quarter was ntait pas anodin, as the French would say -- not harmless (in terms of significance).

At any rate, after a good hour of wading through the crowds, puzzling over the city-provided map and stumbling upon other pieces, such as Franck Scurti's Commerce -- a kind of neon Pop version of Robert Smithson's partially buried woodshed, i.e. a trio of glowing shop awnings arranged in a vacant lot -- I finally reached my goal and was ushered into the nave of the church where the work was majestically located.

Entitled Very Hungry God (2006), Gupta's sculpture was impressive and thoroughly worth the pilgrimage. Constructed expressly for the event, the monumental skull is finely crafted out of aluminum pots and pans and weighs in at 1,000 kilos. A prodigious momento mori and then some, the sheer spectacle of this work with its dazzling vacancy all but blinds you to its essentially morbid content.