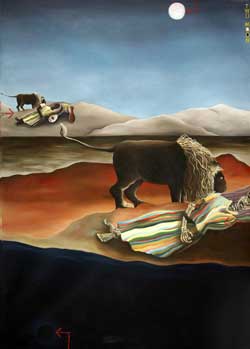 
The predominant subject in my works has been sexual imagination, which also questions and engages with the stereotypical ways in which sexuality is understood and defined. The sexual behavior of human beings is habituated by the societal norms and conditions. I believe it is due to this, that the sexual fantasy/ imagination gains importance in a human being's life and an individual achieves extreme pleasure out of this simple act of day-dreaming, wherein he/she escapes from the harsh realities of this world/society via an undisturbed and uninterrupted flight of imagination. This kind of subject needs to take into consideration varied cultural practices as well as relation between human beings in a given time-space continuum. In addition, I believe contemplating on sexual fantasies and re-presenting them 'visually' would endow alternatives to violence and would make world peaceful.

My continuous persistence with this subject has furthermore stimulated my interest to explore 'image - making' in different kind of mediums. My work integrates aspects of the personal and the social using material/medium as per the subject's requirement. This assemblage of personal and social worlds has been the most important linguistic device which allows me to concentrate upon the whole process of image-building. The socio-political realities experienced by me in addition to the commonplace occurrences witnessed by me are translated into visual language. The intimate relationship between medium and visual form has been my engagement and via the process of image-building I explore this relationship.

In this endeavor of mine, I also have been 're-presenting' certain imageries/ motifs taken from artists of yester years [like Mondrian, Henry Rousseau etc.] as well as from specific forms of traditional art. The political and social contexts underlying these works were quite different. I re-present these imageries according to my idea, in the process critically evaluating the norms and terms existing within contemporary society.

THE Indian artist who caused a stir at the inaugural art fair at the Marina Bay Sands Exhibition and Convention Centre by stripping naked has stopped his attention-getting act.
The artist, Mr T. Venkanna, who sat on a bench in the nude and took pictures with visitors, was not in the booth on Friday.
Some newspapers had gone to town with the Hyderabad artist's act at Art Stage Singapore, questioning whether it could be considered art. A lawyer was quoted as saying the show could be against the law as it is an offence to appear nude in public. The art fair, which opened to the public on Thursday, is considered a public event.
The exposure proved to be too much for some people. On Friday morning, Gallery Maskara's owner, Mr Abhay Maskara, told The Straits Times over the phone that the gallery was asked to stop the performance. He did not say who advised him to do so.
He said: 'It is always a bit disheartening when works of art are not seen as art. We did not set out to create any controversy.'
Mr Venkanna had sat behind a black curtain and a sign was posted in front of the booth, warning viewers of the content and restricting viewers to those who are 21 years and older.