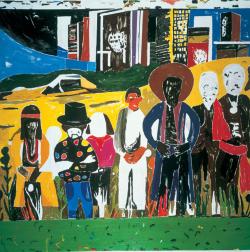 In New Quarter, all the characters of the barrio turn out: the pimpish don, moustachioed wideboy and the scar-faced bandito/padre. The ravished tower-block ghetto is a kiddie version of Atari graphics. It’s a painting of communal harmony; a portrait of a seedy underworld eroding in Benetton colours. 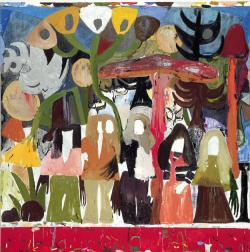 ’I do painting a bit like people make a lunch box,’ Tal R explains, ’I constantly have this hot-pot boiling and I throw all kinds of material into it.’ ’Kolbojnik’, the Hebrew word for leftovers, is more than appropriate to describe his home-baked painting style: imaginary pastoral scenes based on his everyday life, rendered in guttural faux abstraction, canvases often literally collaged together like a visual goulash. Sisters of Kolbojnik, depicting an earthy gang of shaggy-haired, bell-bottomed nymphs in a magic-mushroom forest, is a celebration of overlooked wall-flower beauty, as socially inclusive as a community mural.

Pen and Chalk on Paper

In Birth of Figure, Tal R humorously depicts his process of artistic creation. Drawing tongue-in-cheek reference to Courbet’s L’Origine du Monde, Tal R’s earth mother is the opposite of sexual: simply a giant pair of cartoon-ish legs, she perversely spurts out one masterpiece after the next. Surrounded by the grotesque totems of her making, they dumbly stare in bleak confrontation. The chequered pattern of the bed suggests the conceptual stratagem of chess.

Tal R’s Birth of Laughing Chinaman is a pastiche of visual imagery; the construction of this piece is as incongruous as an out of time lip-sync. Tal R’s cartoon-ish drawing obeys no discernable logic. The room, in disjointed perspective, becomes a depository for random items of Tal R’s invention: 60’s furniture, a ship in a bottle, shrunken heads and voodoo sculptures. Revelling in absurdity, Tal R creates this image simply to will its existence. Collaged elements, such as the film projector and spider web, serve to further distort the sense of space, their applied shapes contribute to the jumbled disorder.

Tal R merges the stylised primitivism of the avant-garde with his own contemporary lexicon of suburban culture. Inspired by the psychedelia of 60’s album covers, Tal R’s Cream 13 portrays all the accoutrements of rock and roll sin with a ham-fisted approximation of Picasso. Use of low art materials, such as biro pen and cut and paste, lends a degenerate feel to this high art reference, trapping the drawing between teenage doodle and masterpiece. 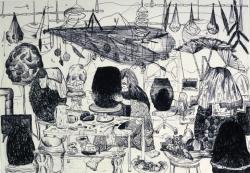 Tal R
Inside Out

Depicting an artist’s studio, Tal R’s Inside Out seizes on the clichéd perceptions of creative value. Clad in tie-dyed muumuu, surrounded by rows of dried flowers, and ugly muddy pots, Tal R portrays his sculptress as a new age bohemian. These ethics of communal harmony and individual expression are prized above all else in Tal R’s work. His art is made of everyday experience and materials, his contribution construed as generosity of vision.

In this tribute to very large hairstyles, Tal R elaborates on the obsessive patterning which is predominant throughout his work. Psykologi Canit Dance shows Tal R at his most refined. Drawn entirely in ballpoint pen, his women are like flowers in window displays, gaining an unlikely fragile elegance, beautifully embossed into the smooth surface of the paper. 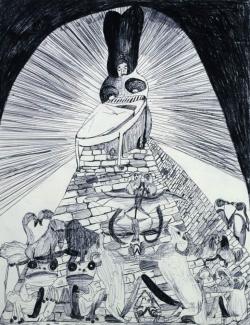 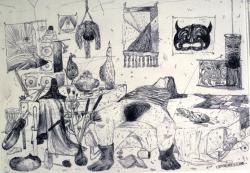 Tal R’s drawings of teenage bedrooms are infused with awkward embarrassment; the secure dens of iniquity, of immature fantasy, and unfulfilled lust. Crammed with overwhelming information, Tal R delights in drawing the ephemera of adolescent identity crisis: Japanese lanterns, slickly ferns, tattered bongos and head-shop posters, the trade fare of rebellious fashion. Tal R captures this child/adult inbetweeness at its most vulnerable moment: pants down, Shamotte is both funny and cringe-worthy. 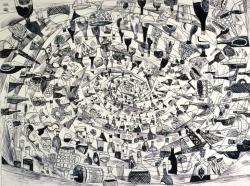 Tal R uses vortex compositions repetitively in his work, as seen in paintings such as Melody and Fungusia. In his drawing Spiral Bar, Tal R pushes this design to the extreme. Like an alcoholic’s fantasy of the ultimate cocktail lounge Spiral Bar spins out of control in dizzying delight. Tal R’s drawing is a time consuming process: the web of lines has been ruled, and shading added to create the illusion of sculptural depth. Painstaking detail places Spiral Bar as an endeavour of addictive compulsion.

Tal R sees his paintings as a form of storytelling. His drawings and paintings adopt a playful sophistication; in their faux innocence they present the everyday world infused with wonder. In The Boots, Tal R takes pleasure in rendering the clichéd clutter of an adolescent bedroom: cobra poster and druggie candles strive to stamp their identity over the mum and dad homeliness of potted plants and knickknacks. Tucked away in this nasty lair, Tal R’s figure takes particular pleasure in his outlandish footwear. 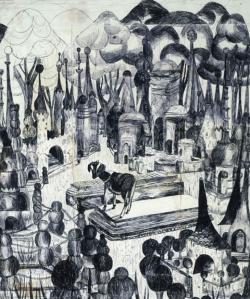 Tal R’s drawings operate like highly rendered versions of the places his paintings might represent; half way between realism and its total corruption via the artist’s imagination. Favoured motifs reoccur in different form, and recognisable imagery transforms into clunky geometry. In Tranquebar Tal R draws a scene of gothic fairytale proportion; his mystical village with wandering goat bears striking resemblance to a Mediterranean cemetery. The fragmented ground, made of collaged patches of paper, underscores this shifting illusion.

THE PAINTER AS DJ


Tal R paints readily understandable narratives, sampling miscellaneous contexts without making the stories overly complex or intellectual. The content of the pictures frequently rests quite literally on a solid foundation, as is the case with the work Blocked Door.

The top and bottom of the painting provide the frame for the story taking place at the centre of the picture while also informing of Tal R's modus operandi. Typically the bottom is wider and wilder than the upper bar which Tal R utilises to finish the painting. The bottom, however, functions as the foundation of the story and the picture emerging from the chaos of colours, blots and conspicuous brushstrokes. The subjects in the middle can include anything from messy rooms to car races and landscapes.

Tal R belongs to the group of artists who graduated from the Royal Danish Academy of Fine Arts in the 1990s. Common to this generation of painters is a focus on expressive and painterly qualities which they combine with personal and sometimes banal stories.

The painting of the 1990s starkly contrasts the so-called Wild painting that characterised the 1980s in Denmark. This style found the artists in a consciously expressionist style concerned with intellectual and theoretical discussions, as opposed to the 'small' and intimate stories of the '90s generation.

INSPIRED BY GARBAGE
Tal R's paintings spring from stories, a figure or an object that he allows to develop and transform into a more complicated expression. He uses the idea of a visual dustbin as an inexhaustible source of inspiration.

Physically the dustbin is placed in the painting's lower half where it enters the painting, populating it with a multitude of colours and shapes. There is no hierarchy to Tal R's art; everything can be and is shown, no subject is too pedestrian, too revealing or too banal.

His unpretentious approach to art characterises his work which is chaotic, humorous and full of movement. After many artists wrote off the medium, he has added new energy and possibilities to painting in terms of both expression and content.

Painting is not the only medium used by Tal R - he also uses photography, drawings, mobiles and total installations. Graffiti, children's drawings and cartoons form the basis for his paintings, the expression of which is an extension of the CoBrA movement and the humorous Fluxus happenings of the 1960's.


The art of Tal R, a Danish painter and environmental artist, defies concepts and definition. His work tests the viewers' desire to recognise objects and things. Tal R's works are rich in themes that remotely remind one of something - but one cannot tell exactly what.
Born in Israel in 1967, Tal R takes his themes from everyday life. He does not follow the traditions of art history too strictly and according to his own words, he rarely goes to art museums. His inspiration comes from the diversity of the world around him. Television programmes, horror films, home decoration objects and encounters with neighbours all find their way into his art. He collects in his plastic bags discarded stuff produced by the consumer culture, and gives it a new lease on life as part of an artwork. In art literature Tal R has been treated more as a DJ or a 'soup man' rather than a painter in the traditional sense. He throws together ingredients from here and there and aims to achieve a good mix. In his experimental cuisine, a childlike 'finger-paint' method is often used to season shocking meanings and hidden pictures.

Tal R has a distinctive way of explaining his paintings. "I constantly have this hot-pot boiling and I throw all kinds of material into it," he told an interviewer some time ago. More recently: "I do painting a bit like people make a lunch box." Add the fact that his London solo debut comprising thirteen bright and unruly mixed-media works, four embroidered cloth banners, and an installation of thirty-two drawings was titled "Lords of Kolbojnik" (the latter word being kibbutz slang for the rubbish left over after a heavy meal), and it's hard not to wonder, sometimes, whether the Israeli-born, Copenhagen-based artist hasn't missed his vocation.