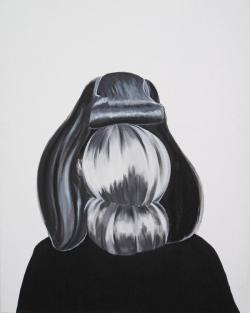 76 x 61 cm
Tasha Aminiâ€™s work offers focused and meditative responses to imagery. She develops her paintings from photographs, some of which are personal and others that are found and anonymous. Amini does not work with a specific theme or set of motifs, but rather is drawn to her subjects on an intuitive level. In her paintings she tries to capture this psychological resonance. In Untitled Amini renders a portrait of a woman, inserting a hairdo where the face should be. It creates a sensation of absurdity and muteness thatâ€™s both humorous and menacing. 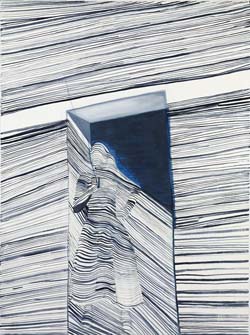 Dora Marr was a surrealist photographer who was Picasso’s lover for ten years. Untitled is inspired by a photograph Marr took of Picasso. Amini renders this scene as a multitude of undulating lines, their endless repetition and skewed perspective reverberate an uneasy power. In her painting Amini has transformed Picasso’s body to that of a woman to further add to the sense of ambiguity. 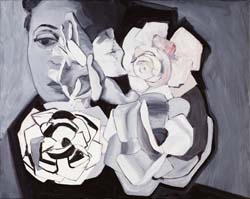 41 x 51 cm
â€śIâ€™m often drawn to images of very beautiful women because theyâ€™re barriers; they have personal significance for me,â€ť says Amini. â€śMy work doesnâ€™t celebrate femininity, but suggests an uneasiness about femininity and women that are really successful.â€ť In Untitled Amini presents a womanâ€™s face obscured by an arrangement of flowers. It evokes a contradictory beauty. The poetic and fragile motifs are made to seem strangely crude and concrete, rendered with thick brush strokes and reduced colours. 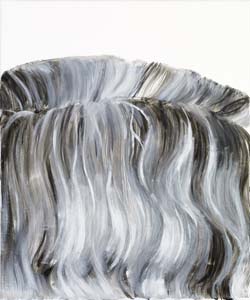 30.4 x 25.2 cm
In Untitled Amini renders a close-up of hair; a tiny fragment of a subject that, once fixed upon, transforms into the suggestion of a landscape. This collapse between intimacy and expanse plays an important role in Aminiâ€™s work and is reflected in her painting process. â€śI like the idea of figuring out how little you can put on a painting to make a painting.â€ť Amini explains. â€śI love painting hair: thereâ€™s an intensity in the repetitive action and I can lose myself in doing it.â€ť 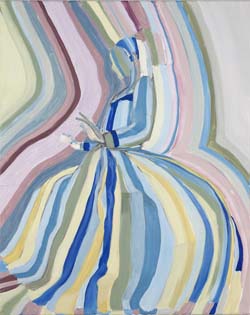 76.5 x 61cm
Amini never works with a preconceived idea about her paintings, and each of her compositions is developed as a spontaneous and immediate response to her subjects. Untitled shows a woman in a stylised dress entirely constructed from colourful stripes. The pattern of the dress appears to grow out of the figure, surrounding her body like a positive aura or force. 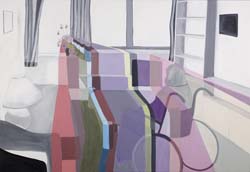 111 x 161cm
Untitled pictures a figure in a wheelchair. When making this painting Amini was thinking about confinement and repose, and imagined the figure staring out of the window for hours lost in her own daydreams and thoughts. Amini relates this feeling to the experience of painting alone in a studio. Amini executes this scene in soft, almost translucent colours that lend an air of transience and physical intangibility. Throughout her practice Amini engages with the sense of expansive psychological or internalised space. Her paintings visualise subconscious sensation and capture the reflective pauses within thought as a disquieting stillness.

Tasha Armini's Excellent Women paintings, currently showing at Kate MacGarry, are extremely reticent. Crafted from a rigorously conservative pallet of subdued concrete greys and artichoke greens, they shy away from assuming so much as a title. Armini works from photographs, but the sources are either from Armini's personal archive or from pictures faded out and made vague beyond recognition as they become a painting. This all-pervading obliqueness, while undeniably suggestive as to the status of the 'women' in the show's title, also, however, begins to prompt the question as to whether there is enough here â€“ both technically and conceptually â€“ to anchor the exhibition and prevent it from disappearing behind its own carefully constructed obtuseness.

At their best, Armini's works are delicately rendered and sensitively suggestive. My particular favourite â€“ I think it was the seventh untitled piece, but then, I got slightly muddled as untitled followed untitled â€“ was a small canvas of a woman's head viewed from above, the dark blues and browns of her hair separated by the vulnerable white spine of her parting. A few straggly white and grey hairs, stark against the surrounding blackness, hint at the onset of age. Her face, rendered as a grey swipe of forehead and nose, is, like the painting itself, suggestion rather than statement.

This evasiveness is everywhere: a woman lies with her arms folded behind her head; her face, with its blank grey ovals for eyes and a dark line of shadow running round it, is more mask than flesh. Elsewhere, sculptured segments of female faces emerge from the uniform tones of the canvas. Female forms continually mingle with patterns and decoration: an eye merges with a floral design; black and white lines striate a woman with a cigarette. Two ceramic pieces accompany the paintings, drooping bows that cling to the gallery wall like sad moths.

Arminiâ€™s work throws up some resonant ambiguities: do her women want to be hidden, or are they being repressed? Are they cannily camouflaged or restrictively bound? Despite this, Excellent Women is not entirely convincing. I admit a bias against the deliberately naĂŻve style of painting Armini has cultivated, but I felt she genuinely undermined herself at times with the overplayed simplicity of her technique. This was because at points she demonstrates her capabilities: the eyes of a woman in one portrait, for example, result from a careful layering of nuanced brushwork, and bestow on their owner a magnetic quality. In comparison, the casual daub of a bow detail on a dress seems too easy, and compromises that titular adjective.

It looks like there's a quiet struggle going on between optimism and despair in these sensitive new paintings by Tasha Amini. The artist's subject is femininity, which she often represents via a symbolic haberdashery of ribbon, bow and chintzy fabric forms. The decorative effect of these is in ironic contrast to the threat of bondage that they impose on her female subjects, compromising their independence in subtle, disturbing ways. It's a disassociated, dreaming sort of world that Amini depicts - created using a very restricted range of subdued colours - but also a world of purposeful, dignified female strength.